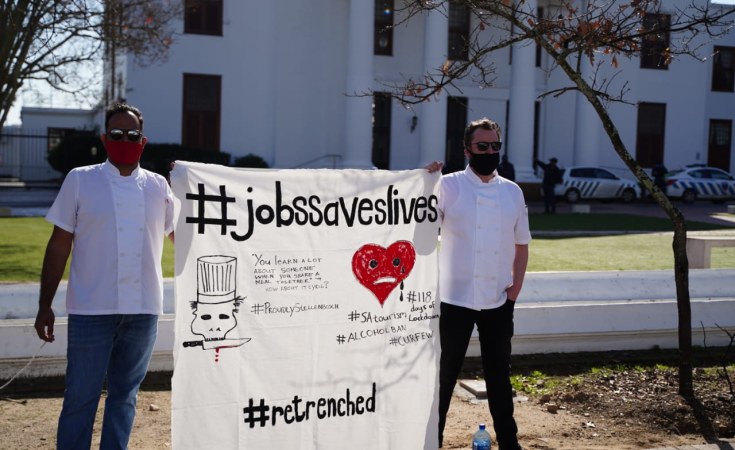 Stellenbosch Wine Routes
Thousands of South African hospitality and wine industry workers took to the streets to protest against the banning of alcohol sales and restrictions on restaurant hours during the Covid-19 pandemic.
GroundUp (Cape Town)
By Johnnie Isaac

In an interview with GroundUp, Dr David Stead, Infectious Diseases specialist and Head of Medicine at Cecilia Makiwane and Frere Hospitals in East London, says the historic problem of an underdeveloped, under-served and less robust health system in Eastern Cape has worsened the burden on healthcare professionals. The system in his province feels the strain and cracks appear much quicker in a system that has already been limping along, broken and understaffed.

As a senior specialist he is responsible for life and death decisions, such as which patients require more than just oxygen masks, which patients to escalate to ICU, the number of patients that can be absorbed in the healthcare facility, supervising junior doctors and the hospital's Covid-19 committees.

"There's no doubt that this is the biggest challenge we face in the living memory of being in practice for 20 years ... The growth of the pandemic is very intense," said Stead.

The Eastern Cape has seen the number of confirmed Covid-19 infections nearly double in a two week period, from 29,340 on 1 July to 55,584 on 15 July. Over the same period confirmed Covid-19 infections at Buffalo City Metro where Cecilia Makiwane and Frere Hospitals are located have also doubled from 6,767 and 80 deaths to 13,536 and 153 deaths. (Deaths are probably substantially under-counted too. Between 6 May and 7 July, the Medical Research Council estimated that Buffalo City had nearly 500 "excess" deaths.)

Sead said: "We fortunately have not reached a point where we have to decide who gets oxygen, but that is one of our greatest fears - to run out of capacity with oxygen.

"The decisions we have to make is who gets more than just an oxygen mask, because when patients are not coping with oxygen face-masks, they get escalated to high levels of care and unfortunately that is extremely limited.

"We have non-invasive ventilators but some patients require mechanical ventilators and that is extremely restricted in the state centres at the moment.

"We have been offering very little intensive care for Covid and that is some of the hard decisions I have to make. It's generally younger patients without comorbidities that would be candidates."

"We have already had more than 150 staff at Cecilia Makiwane that have been off sick, although some of them have recovered and come back to work. Everyday there's a staff member who tests positive," he said.

He said both facilities have experienced the death of staff members.

Despite strenuous efforts and strict use of personal protective equipment (PPE), Stead also came down with Covid-19.

"I was expecting to get an infection at some stage and I'm sure I got it from work because I didn't have any contacts outside of work. We have been fairly isolated outside of work.

"I have had close contact with Covid-19 patients and some colleagues who had been infected as well, I'm not sure which of those I caught it from," said Stead.

He lives with his wife and three children.

"I think they still don't understand how serious this is."

"I was not keeping away from them, so we decided to quarantine at home and I tried to isolate myself from the rest of the family. My wife and my son became symptomatic as well but we fortunately had very mild disease," he said.

"We have always had patients dying. It's just the intensity and the numbers of patients that are dying in casualty and in the wards. It's quite a lot of strain for nurses, especially those who work much closer to the patients and have to wrap up dead bodies," said Stead.

"I think when we had few staff testing positive, there was a lot of panic ...

There were lots of units closing due to pushback from the staff, out of fear and the involvement of the labour unions. It was extremely challenging - as we were trying to prepare for patients, staff were going in the opposite direction.

"But now the staff have become more comfortable treating corona patients; corona has become more of a reality. Their fears are real because some of our colleagues have paid with their lives," said Stead.

Stead is under immense pressure to see the completion of a field hospital being prepared at the Mercedes Benz plant in East London, and ongoing renovations of old Cecilia Makiwane Hospital to create a space for extra beds.

He believes that the battle against Covid-19 will be won at community and personal levels. He warns against Covid-19 fatigue which has seen people relaxing and behaving like the country is not in the middle of the pandemic storm.

"It comes down to each individual taking responsibility for not spreading Covid. I'm concerned about socialising that is currently taking place. People are having parties and are seeing their friends, acting like there's no Covid.

"I think they still don't understand how serious this is.

"I think some people may be comfortable for themselves, but they still don't realise that by catching Covid they are passing on the chain of infections and they might infect someone that can die of Covid."

Previous Story
Thousands of Gauteng Teachers Not Back At School
Next Story
KZN Expected to Be the Next Epicentre, Mkhize Cautions

Thousands of Gauteng Teachers Not Back At School

KZN Expected to Be the Next Epicentre, Mkhize Cautions

South Africa's Schools to Close - Again
Tagged:
Copyright © 2020 GroundUp. All rights reserved. Distributed by AllAfrica Global Media (allAfrica.com). To contact the copyright holder directly for corrections — or for permission to republish or make other authorized use of this material, click here.