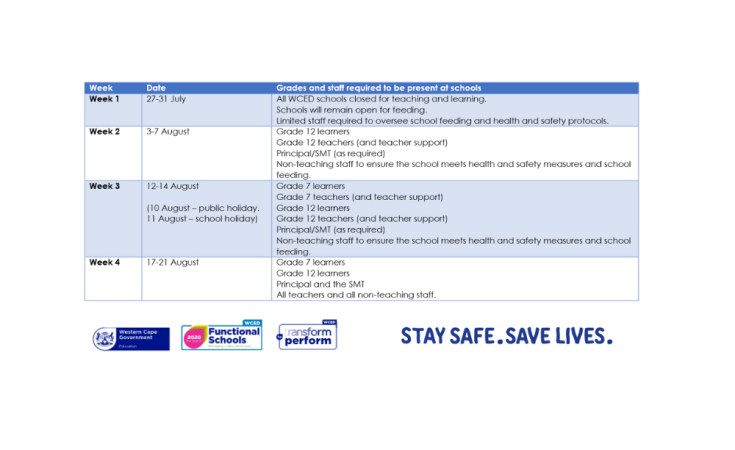 WCED
Following the announcement by President Cyril Ramaphosa regarding a break in the school calendar, this is a summary breakdown of the four-week break.
SAnews.gov.za (Tshwane)

The Country's Covid-19 cases soared by 13 104 new cases on Thursday, bringing the total infections to 408 052 since the start of the outbreak.

Meanwhile, 153 more people succumbed to the disease, pushing the death toll to 6 093.

Of the additional fatalities, 48 are from the Eastern Cape, 38 from KwaZulu-Natal, 31 from Gauteng, 28 from the Western Cape and eight from the Northern Cape.

In his address to the nation on Thursday, President Cyril Ramaphosa said the country should brace itself for the difficult weeks ahead, as the worst-hit provinces of Gauteng (with 148 854 cases), Western Cape (88 928), Eastern Cape (69 445) and KwaZulu-Natal (53 406) experience a rapid rise in infections.

"We have also seen a levelling-off of infections in the Western Cape since the third week of June. Although it may be too early to tell, this development provides some hope that the province may have passed the peak of infections," said the President.

He called on South Africans to remain cautious and vigilant, and continue to follow strict prevention measures in order to avoid another rise in infections.

While the number of new cases is a cause for concern, President Ramaphosa said the country continues to have one of the lowest case-fatality rates in the world, and has fewer COVID-19 deaths than many countries with similar or even lower numbers of infection.

The total number of those who have recuperated is 236 260, which translates to a 58% recovery rate.

According to the World Health Organisation (WHO), the number of cases worldwide has surpassed the 15 million mark, while 619 150 deaths have been reported.

South Africa is now the fifth-affected nation in the world and accounts for more than half of the confirmed cases on the African continent. 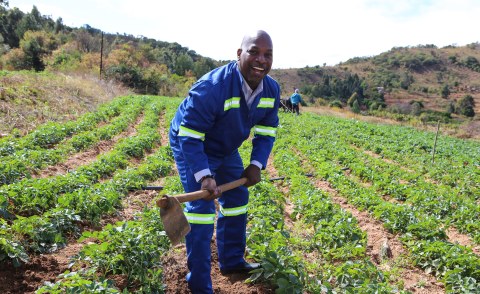 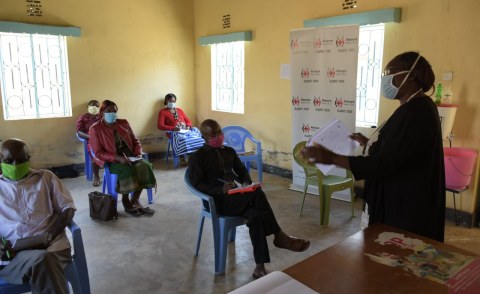 WHO Warns About Inadequate Protection for Covid-19 Health Workers
Tagged:
Copyright © 2020 SAnews.gov.za. All rights reserved. Distributed by AllAfrica Global Media (allAfrica.com). To contact the copyright holder directly for corrections — or for permission to republish or make other authorized use of this material, click here.