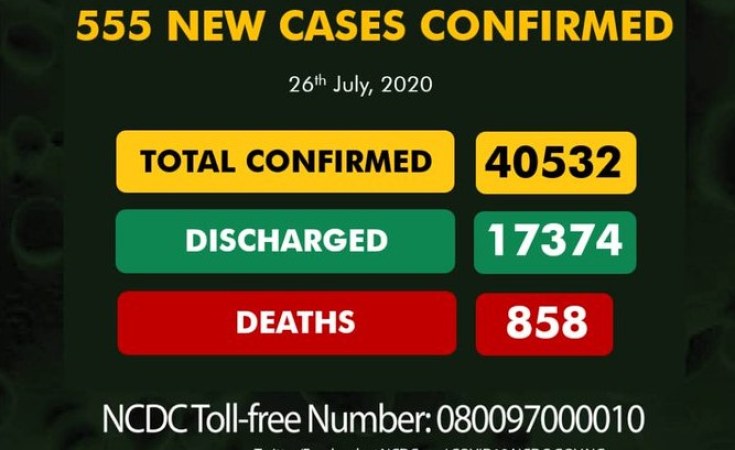 More than 40,000 confirmed cases of coronavirus have been recorded in Nigeria, leading to the death of over 858 people, authorities announced late Sunday.

According to the Nigeria Centre for Disease Control (NCDC), 555 COVID-19 cases and two fatalities were recorded in the country on Sunday.

The new figure of infections shows a slight increase from the 438 cases reported on Saturday.

According to the NCDC, out of a total of 40,532 infected persons so far, 17,374 have recovered and have been discharged after treatment in the country's 36 states and the Federal Capital Territory (FCT).

Over 250,000 people have been tested for the virus in a country of over 200 million people.

Lagos remains the epicenter of the disease with a total tally of 14,456 infections, and 192 deaths. Over 2,000 patients have been discharged after treatment.

Nigeria's commercial nerve is followed by the nation's capital, FCT, with 3, 481 infections and 41 deaths. Oyo has since displaced Kano to become the third state with the largest caseload with 2, 570, and 21 deaths.

Health experts believe there is gross undercount of the positive cases, considering the ratio of number of people tested to the population.

On April 28, the Nigerian government announced its target of testing at least two million people within the next three months.

The ambitious 90 days' target will elapse on July 28, yet the country has not tested up to 20 per cent of the two million.