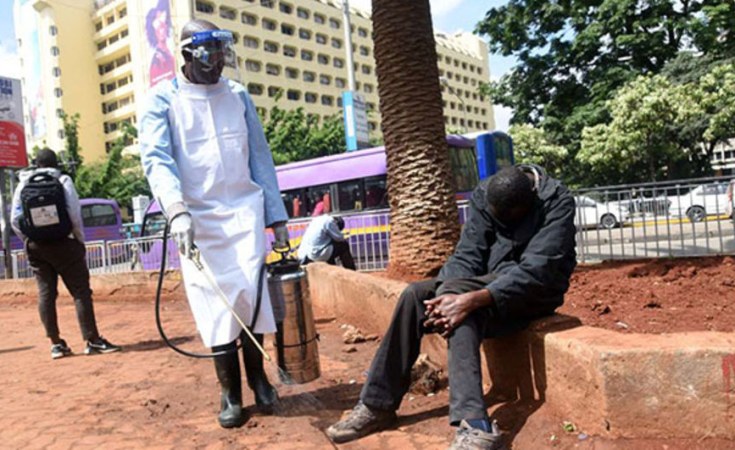 Evans Habil/Daily Nation
An official from the Nairobi Health Department disinfects a street against the coronavirus (file photo).
The Nation (Nairobi)
By Verah Okeyo

Kenya Sunday recorded the highest number of daily Covid-19 infections since March 13, a development likely to inform the outcome of President Uhuru Kenyatta's crisis meeting with governors on Monday.

According to the Health ministry, 960 people tested positive out of 8,261 samples that were tested.

The surging infections in counties neighbouring the capital indicate the impact of Mr Kenyatta's decision to lift containment measures and reopen the city county.

In Nairobi, most of the infections were recorded in Lang'ata, Westlands, Embakasi East, Starehe, Kibra, Dagoretti North, Embakasi West, Kasarani, and Makadara. In Kiambu, the infections were concentrated in Kiambu town, Githunguri, Ruiru and Thika while in Machakos, the cases were in Athi River.

A total of 276,415 tests have been conducted from which 280 deaths have been recorded. The total number of positive cases stands at 17,603.

Overall, Nairobi bears the highest number of people with the virus at 10,180 cases (58 percent), followed by Mombasa (11 per cent), Kajiado (6 percent) and Busia (4 percent).

People aged 20-40 make up the majority of those who have tested positive, accounting for 55 per cent of all the cases.

Meanwhile, obesity -- a condition that affects two in every five Kenyans -- has been implicated in many of the hospitalisations and deaths.

Preliminary research on African American deaths due to Covid-19 in France, the UK and the US show that being obese significantly increases the risk factor for being hospitalised, even in young people. In Kenya, Health Director-General Dr Patrick Amoth has constantly highlighted that the people in the intensive care units had "underlying conditions such as high blood pressure, obesity and diabetes".

Dr Anthony Etyang', a consultant physician and clinical epidemiologist based in Kilifi explained that obesity always puts the body on alert for inflammation which can go into an overdrive when Covid-19 sets in.

In his commentary in the British Medical Journal, Feng He -- a physician and a professor of Global Health Research at the Queen Mary University of London -- termed this overreaction as a fatal condition called a "cytokine storm".

Cytokines are small proteins released by cells in the body.

When the body mounts response to fight diseases, these processes trigger inflammation. When the virus that causes Covid-19 enters the lungs, the body summons these cells to attack it.

This results in inflammation. For obese people, this process leads to high levels of cytokines resulting to hyperinflammation.

"This harms the patient through organ failures and can result in death," Dr Etyang said.