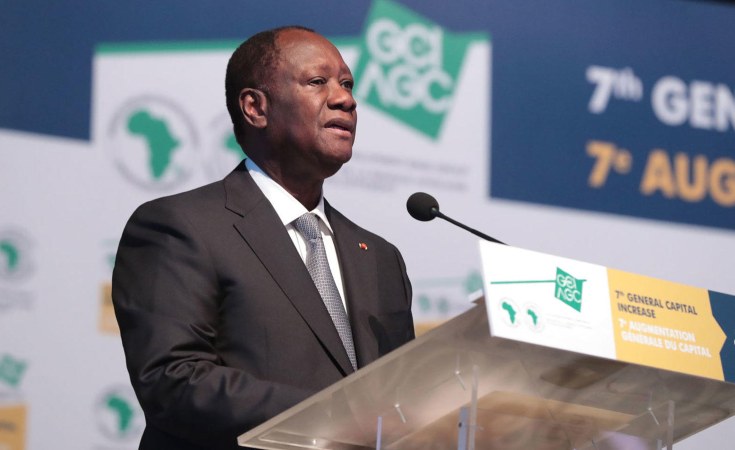 AfDB
The President of the Republic of Côte d'Ivoire, Alassane Ouattara, in 2019.
Chatham House (London)
analysis By Paul Melly

After the sudden death of Côte d'Ivoire's Prime Minister Amadou Gon Coulibaly, President Ouattara is now deciding whether to stand for a third term. However, such a move would face challenges internationally, and particularly in West Africa.

Gon Coulibaly, an economic technocrat and Ouattara loyalist since the 1990s, was earmarked in March as the candidate for the ruling Rassemblement des Houphouëtistes pour la Démocratie et la Paix (RHDP) party in the elections due in October, and represented a handpicked heir, trusted to sustain the strategy established during Ouattara's nine years in power.

Many RDHP parliamentarians and local mayors are now pressing the 78-year-old Ouattara to run again. This was not what he had planned. He hoped to go out on a high - 'par la grande porte' - and set a statesmanlike example of retirement by choice, making way for the next generation. His leadership of reform of the regional currency that will see the end of the West African CFA franc would have been the crowning achievement of a presidency that had taken his country from post-war stagnation to sustained growth GDP growth rates around seven per cent before COVID-19 forced a slowdown, as it has worldwide.

Gon Coulibaly had undergone a heart transplant in 2012, and when he hurried to Paris in early May and was fitted with a stent, some wondered whether he would have the energy required for an election campaign. Yet he returned home on 2 July, with his formal nomination by the RHDP pencilled in for early the next month. His sudden death on 8 July, at the age of just 61, was a terrible personal blow for Ouattara, who had regarded him almost as a son, and much more than a purely political protégé. But it also left the president facing a profound strategic dilemma.

Names of alternative potential RHDP candidates have been floated - notably the defence minister, and now interim premier, Hamed Bakayoko and the secretary general of the presidency Patrick Achi. Both have solid electoral track records and ample experience of government. But over recent days the impression has grown that they do not command the ultimate confidence of Alassane Ouattara to take on the leadership of the nation.

Speculation has grown that the president will conclude that he has no choice but to go back on his promise to retire and stand for yet another term. Although some respected legal experts disagree, he has always made a point of insisting that the constitutional reform of 2016 allows him to run again. And many influential voices within the RHDP are now pressing him to do so.

This is not 'rentacrowd' fawning. Many members of the governing party have always felt that Ouattara offers the strongest blend of political appeal, governing capability and international profile required to lead a country that likes to see itself as West Africa's 'elephant'.

In electoral terms, Ouattara's greatest campaign asset might be the unconvincing state of the opposition figures who are actually free to stand, after the Ivorian authorities' strong-armed the judicial system into blocking the hopes of the of the smooth-talking former parliamentary speaker Guillame Soro, who had great appeal for Cote D'Ivoire's growing young population. Soro is now exiled in France after conviction in absentia for corruption. Ex-president Laurent Gbagbo remains in Brussels on the orders of the International Criminal Court, while it considers the prosecution appeal against his acquittal on charges of human rights crimes. That leaves another former head of state, the 86-year old Henri Konan Bédié, as the main opposition challenger.

However, even if the RHDP party machine delivers victory for Ouattara, a third term risks hard questions from those who dispute its legitimacy and it may generate other significant political challenges too. Some 60 per cent of Ivorians are under the age of 25, and many young people are impatient for leaders more in tune with their concerns and outlook. Some 51 per cent now live in towns and cities.

The sprawling Abidjan conurbation, in particular, weighs heavily in the political culture and national mood. Street protest and urban frustrations are a real factor, and something that fuels vocal grassroots support for both the Soro and Gbagbo camps.

Moreover, despite the government's capable management, the COVID-19 crisis has struck a severe economic and social blow that is sure to impose painful legacy pressures. Even when real GDP was rising by seven per cent per annum, increasingly evident inequality was brewing popular resentment. Corruption appeared to be on the rise, and the obvious prosperity, construction and consumption in parts of Abidjan were not reflected nationwide nor in all sections of society.

In the latter years of his second term, Ouattara recognized this and launched an ambitious programme to broaden the reach of development and nudge growth towards a more 'inclusive' model. But selling this as the core of an election agenda would be harder for a political veteran who has been in power since 2011 and who now went back on his rhetoric about making way for a younger generation.

A third term Ouattara would also face challenges internationally, and particularly in West Africa. He has always presented himself as a statesmanlike figure with restraint and respect for institutional values, setting a tone that has helped in the management of numerous regional crises - exemplified by his participation in a five-president mission to Bamako last week, an effort to broker a solution to Mali's political and protest deadlock. If a third term run sparks mass domestic protest or accusations of constitutional manipulation, the diplomatic standing and influence so associated with Ouattara will be jeopardized.

So Côte d'Ivoire's president faces profoundly awkward questions as he ponders the third term bid that he had forsworn less than five months ago. And yet he may well conclude that, from his political perspective, there is no viable alternative.

'The Ruling Coalition Has a Good Balance Sheet'

Next Story
Tagged:
Copyright © 2020 Chatham House. All rights reserved. Distributed by AllAfrica Global Media (allAfrica.com). To contact the copyright holder directly for corrections — or for permission to republish or make other authorized use of this material, click here.