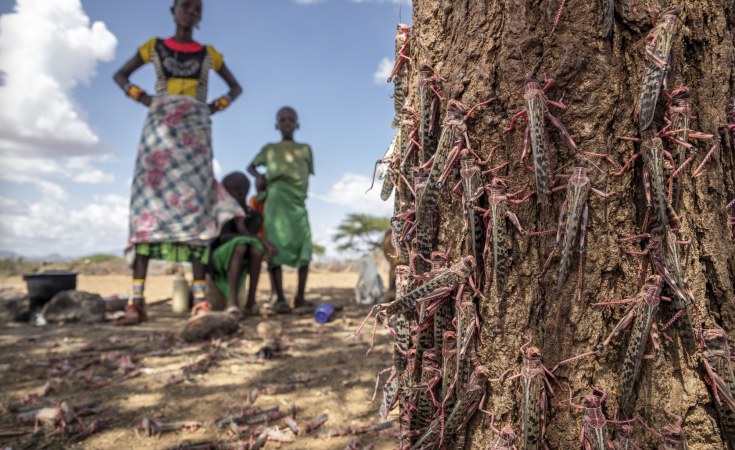 The economic indicators for Ethiopia this fiscal year are less than encouraging, even if economic advisors around Prime Minister Abiy Ahmed (PhD) foresee strong growth and less macroeconomic instability. They have not justified how this could be for a country reeling from a global pandemic and political upheavals.

For all of their optimism though, even they do not mince words when reflecting on the sheer scale of challenges the economy is faced with.

How these challenges will come to affect poor and fixed-income households is often unfortunately lost in the attention given to the macroeconomy. But for those who care to look closer, it is self-evident that the circumstances are dire and have already begun to be felt as food insecurity peeks out its head.

It was only a testament to the deeply worrying political and macroeconomic circumstances of the country that one of the more comprehensive surveys on creeping food and nutrition insecurity within the most economically vibrant city, Addis Abeba, largely went unnoticed.

The Novel Coronavirus (COVID-19) pandemic is contributing to food insecurity as incomes are affected, a survey of around 600 households by researchers Gashaw T. Abate et al. for the International Food Policy Research Institute found. Among the households surveyed between May and June this year, 67pc said that their incomes were "lower or much lower than usual." It was poorer households that were "considerably more likely to report income losses than richer households."

While three-quarters of these households were digging deep into their savings to cope with declining incomes, over half reported cutting down on their food consumption. The figures do not get any less depressing when 68pc of the households reported they were unsure or quite certain they did not have enough savings to cover food costs for 30 days.

The households had reported a 22pc fall in their consumption of fruit between February, when there were no confirmed cases of COVID-19 in Ethiopia, and May, while that of meat and dairy products declined by 31pc and 11pc, respectively.

These are enough indications to believe that it is just the tip of the iceberg. Acute food insecurity was already in the cards for Ethiopia this year as reports from the UN's Food & Agricultural Organisation's (FAO) integrated food security phase classification showed (IPC).

Between February and June this year, 8.5 million people were expected to be food insecure in Ethiopia. A lean Belgseason will further complicate the high food prices for market-dependent areas for food during this period.

These were dire figures in their own right. But it was also an assessment taken at a time when the possibility of a pandemic on the scale of COVID-19 was not on the radar. Neither was it as obvious that the political situation in the country would deteriorate to the level it has now.

Given that the desert locust outbreak was already raging and likely to occur for a second round, it was included in the IPC projection. Six million of those estimated to face severe food insecurity between February and June this year were thus people living in areas that were hit with the swarms.

But this too is expected to have been an underestimation given that the desert locust outbreak is believed to have worsened as the rainy season started much earlier than anticipated. It was good news for a species of locust that needed the wet rainy condition to reproduce and proceed to feed on almost any kind of vegetation and crop they could find. It is terrible news for farms and pastures that will be caught in their migratory path.

What this translates to is a million people needing food assistance directly as a result of the infestation in 2020.

This has been described as the worst invasion of desert locusts the East African region has ever seen in a quarter of a century. It no doubt will pose severe threats to crops, especially in the Eastern and Southern parts of the country. What Ethiopia thus has is a unique cocktail of challenges that has become an unprecedented test to the food security of millions of its people.

But this is only a threat to the production of food.

COVID-19, as a result of partial lockdowns put in place to contain the spread of the virus, has created obstacles within the food supply chain. It has complicated getting food that has been produced from reaching consumers, including spoilage of food items such as vegetables. Already 20 million people in Ethiopia are feared to be facing food shortages, according to GOAL, an Irish international humanitarian response agency.

Adding insult to injury is the rising prices of food items. Inflation having stood at 23.1pc last month, and reaching a high of almost 27pc in March, the prices of food are galloping ahead faster even for a country used to a double-digit, year-on-year rise of prices for food items. It will be a headache that gets more severe the further down households are in the income distribution. It is as much a consequence of supply problems - a combination of the COVID-19 impact on the food supply chain as well as the desert locust invasion - as it is an outcome of a depreciating Birr against a basket of major currencies and a slowing economy.

Given the government's thin fiscal space, how meaningful a humanitarian response would be without a substantial donor response is unclear. Five billion dollars would need to be poured into countries - mostly those located in sub-Saharan and South Asia - that are projected to see an aggregate of 95 million people going hungry, according to Ceres2030, an international institute working on development. Over 65 million dollars is needed for control operations and social protection programmes by UN-FAO for Ethiopia.

But there is a case to be made for putting in place more efficient means of expanding and meeting the targets of social safety net programmes.

This can be by putting in place cash transfers to the poorest, especially women, a more efficient means of meeting needs through self-administration. Togo is a good example, where cash handouts are being transferred through mobile phones for any informal worker with a voting card.

A good opportunity to realise something along these lines in Addis Abeba's case would be to extend the initiative by the Addis Abeba Trade Bureau to bring into the formal sector 80,000 of the city's informal traders. Registration had taken place in the effort to assign them allotted corners in marketplaces, a system that can be built on to effectuate safety-net programmes. There are also safety net programmes that have helped to identify the most-at-risk and chronically food-insecure households in urban and rural settings. Ongoing since 2006, they can be used to make social support programmes more effective and efficient going forward.

Indeed, addressing this issue cannot be divorced from the need to address economic challenges. A fall in the incomes of households is combined with inflation and creates food insecurity for urban dwellers as well as rural populations that will no longer be able to live on subsistence crops.

Here, at least, the Prime Minister's economic advisors are right to worry about macroeconomic indicators of the past fiscal year, which in all likelihood will be carried over to next year.

Locusts Arrive in Gujarat From Somalia Via Pakistan

Next Story
Tagged:
Copyright © 2020 Addis Fortune. All rights reserved. Distributed by AllAfrica Global Media (allAfrica.com). To contact the copyright holder directly for corrections — or for permission to republish or make other authorized use of this material, click here.