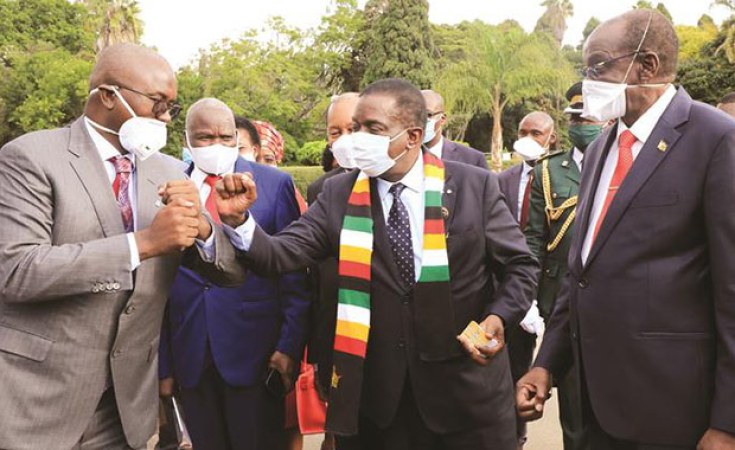 Explosive details show that the state-owned National Oil and Infrastructure Company (Noic) was advanced by Sakunda Holdings US$17,5 million of a US$22,75 million loan agreement to buy out Lonmin's 50% stake in the ownership of the strategic Feruka fuel pipeline, leaving the parastatal saddled with a debt, which is now causing all manner of headaches.

The transaction lifts the lid on the murky control, use and management of the money-spinning pipeline, as accusations of state capture mount. Sakunda Holdings is owned by the politically connected tycoon Kuda Tagwirei.

In 2018, Noic assumed total control of the Beira-Harare pipeline after it snapped up Lonmin's 50% stake in the asset.

The transaction, consummated at a time Zimbabwe was facing a crippling fuel crisis, has now become a major headache for Noic. There are many unanswered questions as to why Noic decided to take the US$22,75 million loan specifically from Sakunda Holdings instead of other players and whether the Tagwirei-run outfit got preferential treatment to use the pipeline.

It also remains to be established whether Sakunda Holdings was paying tariffs for usage of the pipeline from 2018 to date and the nature of gain it accrued from the deal.

As reported by this newspaper on February 20, Sakunda Holdings' dominant usage of the pipeline, which runs from Beira in Mozambique to Harare, has resulted in 40% under-utilisation of the infrastructure, prejudicing Zimbabwe a staggering US$400 million annually.

The pipeline, which until 2018 was partly owned by Noic and mineral resources group Lonmin, is now wholly controlled by the government through PetroZim Line Limited after it paid US$17,5 million to the conglomerate of the US$22,5 million Sakunda Holdings loan. PetroZim Line Limited, a subsidiary of Noic, now exclusively owns the pipeline, although its usage has largely been dominated by Tagwirei's Sakunda Holdings.

Tagwirei, who is President Emmerson Mnangagwa's adviser and Zanu PF benefactor, has vast business interests that straddle the whole economic spectrum ranging from petroleum procurement, banking and mining. In recent times, he has faced accusations of failing to account for US$3 billion his company was allegedly paid by the government to finance the Command Agriculture programme.

Documents seen by the Independent this week show that Noic, which generates billions of dollars annually through levying fuel-procurement companies that use the pipeline, is now indebted to the tune of US$17,5 million, from the loan it received from Sakunda Holdings in a transaction meant to give the parastatal total control of the infrastructure. Noic levies about US$0,06 for every litre of fuel pumped through the pipeline.

The documents also reveal that Noic has since paid ZW$30 million to Sakunda Holdings as cash cover, an amount which the state enterprise will be reimbursed once it settles its debt to Tagwirei's firm. At the time it paid the cash cover amount, the Zimbabwean dollar was trading at par with the US dollar.

The Independent can report that the US$17,5 million paid by Noic to Lonmin to snap up its 50% shareholding in the ownership of the pipeline was paid directly by Sakunda Holdings via an undisclosed offshore account.

According to correspondence from Noic corporate services director Vivian Mandizvidza dated April 23 addressed to the entity's board members, the state enterprise sought "authority" to settle US$17,261 million to Sakunda Holdings under the loan arrangement deal that was entered to buy out Lonmin for PetroZim Line Limited.

The letter reads: "On 26 June 2018, Noic and Sakunda Holdings entered into a loan agreement for an amount of US$22,75 million on the back of a sale purchase transaction between Noic and Lonmin Plc in terms of which Noic purchased the 50% shareholding held by Lonmin Plc in PetroZim Line Limited. The conditions of the loans were as follows: Sakunda would pay US$22 750 000 to Lonmin on behalf of Noic.

Contacted for comment, Tagwirei did not respond. The Independent sought his clarification on the amount of fuel his company moved through the pipeline from 2018 to date and the amount of money it paid for using the same facility. We also sought his comment on the benefits Sakunda Holdings reaped from Noic after providing it with the loan.

In a transaction preceding Mandizvidza's letter to Noic board members, Trafigura -- one of the world's largest oil and metal brokers -- bought out Sakunda Holdings' 51% stake in Trafigura Zimbabwe in February, as it moved to stave off mounting Western and local criticism against Tagwirei. As criticism swirled against Tagwirei's controversial handling of the US$3 billion Command Agriculture funds, the US State Department and Treasury faced pressure from the US Senate to slap sanctions on individuals involved in alleged "public corruption".

Subsequent events, as shown by documents seen by this newspaper, reveal that Tagwirei's Sakunda Holdings decided to terminate its agreement with Noic, and demanded to be repaid the principal amount it had loaned to the state enterprise, plus interest of US$1,384,864.The total amount due amounted to US$25,246,592 as at April 30.

"Subsequent engagements with Sakunda resulted in Sakunda invoking the provision of the Loan Agreement relating to termination. Sakunda raised incapacity to proceed with the Agreement due to the changes in the law prohibiting the payment to a local company offshore. Sakunda further gave notice to terminate the Agreement and requested Noic to pay back the loan amount and interest due," Mandizvidza's letter to board members reads.

"The effect of this communication was to terminate the loan and make repayment due. At the board meeting held on 26 March 2020, the board authorised management to engage Sakunda with a view to reaching an agreement on the settlement of the amount owed by the company in local currency, at the official exchange rate."

Noic chief executive Wilfred Matukeni did not respond to questions from the Independent on why the state enterprise received the loan from Sakunda Holdings and the nature of benefit it obtained from the deal. At the time of going to print, he had not responded also on the amount of money Sakunda Holdings paid from 2018 to date for using the pipeline, by way of tariffs.

Energy minister Fortune Chasi also did not respond to questions sent to him, saying he was not in charge of the portfolio at the time. Jorum Gumbo, now minister in charge of Implementation of Government Programmes, presided over the energy portfolio in 2018.

During the subsistence of the agreement, Sakunda Holdings was awarded a US$6,6 million "discount on pumpings" through the pipeline.

As part of plans to settle the multi-million-dollar debt to Sakunda Holdings, Noic proposed to channel US$14,858 million of its funds held by the Reserve Bank of Zimbabwe (RBZ) from a loan the apex bank borrowed from one of the state enterprise's "clients".

"The Company (Noic) currently has US$14,858 million invested with the RBZ. This amount is a loan accessed by the RBZ... to one of the company's clients in December 2018," the documents read.

According to Mandizvidza's letter to the Noic board members, the entity's management proposed to pay Sakunda Holdings US$14 million in local currency from funds held by RBZ and settle the balance of US$11,246,592 over a period of eight months. The balance attracts 5% interest per annum if it is paid after December 31.

"In the event that the request is approved, we request for authorisation... ,"Mandizvidza wrote to Noic board members.

A petroleum industry source close to the Noic-Sakunda Holdings loan deal, has described the transaction as an "incestuous relationship", arguing that the arrangement prejudiced other players while it gave Tagwirei's outfit "vast acres of space to monopolise usage of the pipeline".

"The US$22,75 million loan that Noic got from Sakunda Holdings stinks to high heavens. It just gets to show you how Tagwirei's company has managed to maintain a tight grip on the usage of the asset. Sadly, the loan has come back to haunt Noic," a source told the Independent this week

Amid disclosures of the Sakunda Holdings loan to Noic, the government's plans to construct a second pipeline that runs from Mozambique into Zimbabwe and feeding the whole region with Mogs at a cost of US$400 million has suffered a stillbirth as a result of fierce resistance from powerful cartels with strong political connections. The second pipeline, which was touted to transform Zimbabwe into a regional petroleum hub, was to be built at a cost of US$400 million.

However, government is trying to revive plans to build a second pipeline with an as yet unnamed Mozambican outfit at the same cost.

Documents seen by this newspaper in November 2018 showed that Puma, which is partly owned by Trafigura, Sakunda's partner then, required 4,4 million litres of diesel and 3,6 million litres of petrol to adequately supply the country's weekly fuel needs. At the height of fuel shortages in 2018, government negotiated for 100 million litres of fuel from Sakunda Holdings, with payment set to be settled over the next 12 months. At that time, Tagwirei's outfit also committed to supply 1,6 billion litres of fuel over 18 months.

Noic would not disclose to the Independent the amounts of money Sakunda Holdings paid through tariffs levied from using the pipeline.

Zimbabwe, in the throes of a debilitating economic crisis, is reeling under a chronic fuel shortage compounded by underutilisation of the Beira-Harare pipeline.

Tagwirei Distances Self From Landela

Next Story
Tagged:
Copyright © 2020 Zimbabwe Independent. All rights reserved. Distributed by AllAfrica Global Media (allAfrica.com). To contact the copyright holder directly for corrections — or for permission to republish or make other authorized use of this material, click here.