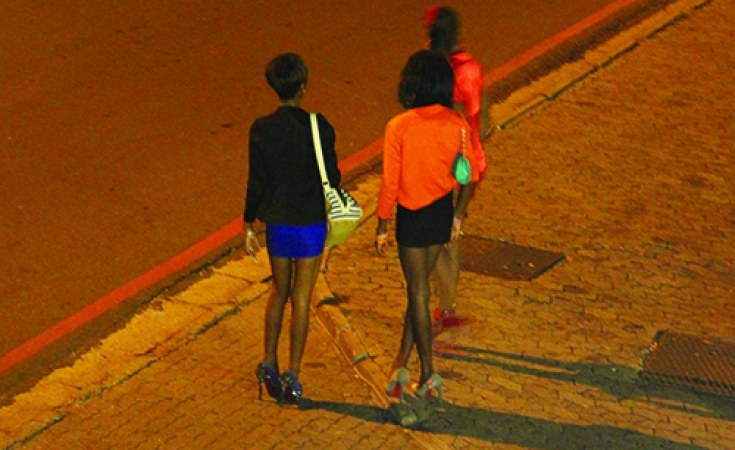 Nairobi — Like a drowning man, Rose Wambui and 24 of her girlfriends - all of whom are sex workers- are clutching at a straw, as the effects of COVID-19 pandemic shuttered their life. Their source of income.

But Wambui believes she is better off because at 23, she only had one child as compared to her friends. Some like their leader Anastacia Wangechi is looking after 6 children, including one left to her brother.

She said the sixth 'dumped' at her house by a friend who fled the area.

Theirs, they say, is not a question of morals, but survival, and they are willing to push any limit to feed themselves and their dependants.

Welcome to Grogan area in Korogocho slum, a poverty-stricken section of the expansive informal settlement, running across the filthy Nairobi river-that serves as an alternative source of food, when all other taps get dry.

"Do we sit down and die of hunger?" it is a question each of the 25 ladies posed, with a tone of defiance and contentment.

They know no other life.

"Where are my slippers?" a drunk youthful man yelled in the middle of this interview, on waking up from what they refer to as the 'base'.

It is a single room with a bed and a worn-out seat. Clothes are hung across the wall, as if on display.

The man was a client to one of the ladies and had spent the night there.

"I don't want to be filmed. I know you are going to say I am a drunkard," he said, missing a step on a staircase as he staggered out.

In Swahili slang, they call their 'profession' "Kutega", one of the sectors, they say, is worst affected by the coronavirus pandemic, coupled with the dusk to dawn curfew among other containment measures like the closure of bars.

Kenya has been on night curfew for four months now since April, with bars declared closed until further notice to help curb the spread of the pandemic that had infected well over 20,000 people and killed more than 300 by August 2. Public health officials have warned of tough times ahead as the country wades through the infection peak period projected to run until the end of the year.

As a result, schools and institutions of higher learning are shut and public gatherings banned.

Even churches which were allowed to operate under strict social distancing gatherings are yet to open fully.

"At times I wonder why I am still alive. My mother is unwell while my father is an alcoholic. My sister who also has a baby is not employed, leaving me as the only breadwinner," Wambui, who is a Form 3 drop-out, opened up to Capital FM News.

Rita Wanjiru, 22, required us to do a simple mathematic problem on their day to day income, which is less than two dollars - "when we are not in the streets doing sex business."

They said the only lifeline offered by Nairobi River is that of water- which is dirty- to clean gunny bags at a cost of 50 cents each.

"This is not enough to feed our children and support our families," Wanjiru, who has a five-month-old baby said. Her firstborn was out playing.

And with COVID-19, they say, their sex clients are equally cash strapped- and while they would charge between Sh500 and Sh1,000 within Nairobi's Central Business District- they are now taking anything.

"What do you expect me to do? Imagine it is already turning dark and I have not earned a single coin," she said.

With the sex business moved from the streets within the city to their homes, the girls have been isolated by the community.

"Our children too are not spared. Other children are restricted to play with them. They say they are children of prostitutes," Wangechi who is fondly referred to as the 'chair-lady' by her colleagues added.

One thing that was clear during the interview, they do not draw pleasure in their lifestyle but must do it for survival.

"I would not want my four-year-old daughter to know what I do to ensure she is dressed well and does not lack food," Wambui said.

She has since given up on her dream of becoming a professional footballer, but she holds dearly on the hope that she will "one day get an opportunity to change my life and secure a better future for my daughter."

The area has a high teenage rate of pregnancies and with the current pandemic, the situation has only worsened according to community leaders.

While the government has set aside Sh10 billion fund to engage youths in cleaning projects through the National Hygiene Programme dubbed Kazi Mtaani, its effects in Korogocho, is yet to be felt.

"We did not get a chance to be enrolled," Mercy Wakonyo said.

According to Nairobi County Commissioner Flora Mworoa, the program might not have covered everyone but it "has cushioned youths from the economic meltdown occasioned by COVID-19 pandemic- most of whom had lost a source of income."

The program has entered the second phase after successful piloting, with Mworoa saying some 55, 524 youth have been recruited in Nairobi and will be engaging in cleaning projects across the city.

"They work in phases of two weeks," she explained during an interview with Capital FM News.

For the next 6 months, those lucky to be enrolled in the program, she said, will earn Sh455 daily.

But millions of others like the cases of the 25 young mothers in Korogocho are not covered and are engaging in all manner of activities, to earn a living.

"Until when?" it is a question whose answers can only be provided by the policymakers, but until then, an entire generation is wasting away.