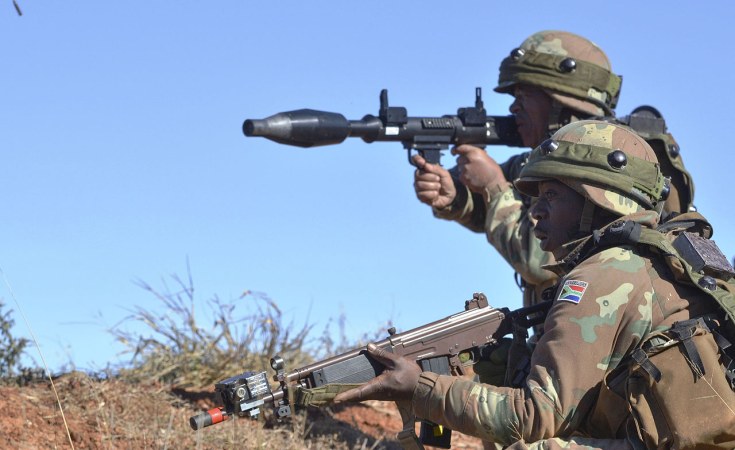 "Mozambique needs to recognise that it is facing a well-led group, that is adapting easily to the conditions imposed on it, and that it is taking advantage of the gaps and weaknesses of the country, especially the FDS [Defence and Security Forces]", warns semi-official think tank CEEI. The clear tone of its new Security Brief is that the Cabo Delgado war is unwinnable without mercenaries. https://bit.ly/CEEI-3

"Much of the progress made by Mozambique's FDS in the fight against terrorism in Cabo Delgado was due to the use of private military companies (PMCs) operating helicopters and drones," notably Dyck Advisory Group (DAG). "The withdrawal of mercenary companies does not mean that Mozambique's security forces will be able to provide security to regions that are affected by terrorism in Cabo Delgado. The final question is: would Mozambique have any other alternative but the use of PMCs, in view of the urgency and high risk that terrorists imposed on the populations of Cabo Delgado?"

The Brief notes that "the use of PMCs has become a common practice in the international system where their employment is done by both weak states and superpowers like the US, Russia and the UK."  (Indeed, "about half of the US Armed Forces in Iraq and Afghanistan is employed by private military contractors," according to an article in Newsweek by academic Bryan Stinchfield: https://bit.ly/US-PMC-BS)

ISRI (International Relations Institute) was created in 1986 as the diplomatic school close to the security services, and within it CEEI (Centre for Strategic and International Studies) was established on the model of Chatham House or ISS, as an independent think tank but close to the establishment. ISRI became Universidade Joaquim Chissano in 2018. Thus Security Brief will be taken seriously.

The report is damning about the FDS. "Mozambique will have to reformulate and restructure all of its national security structure and infrastructure, starting with the armed forces, to combat complex insurgencies. This means that Mozambique must restructure its military forces at all levels."

"Mozambique has systematically underestimated the scale of insurgent success and increasing control and influence over the population and countryside."

"Whenever they manage to regroup, terrorists return more determined, more knowledgeable of FDS tactics and with increasingly effective weapons."

The war in Cabo Delgado is "an external aggression" and "an invasion of our territory", Mozambican diplomat Murade Murargy told a meeting of the Portuguese language community CPLP. Citing the example of France intervening to combat Boko Haram, the former executive-secretary of the CPLP said Mozambique needs military help and the CPLP should mobilise international assistance. He said the CPLP should not wait for Mozambique to ask for help, but should call an urgent meeting. (Lusa 27 July)

The bases and commanders of the insurgents operating in Cabo Delgado are abroad, according to the chief of police, Bernardino Rafael, speaking at the inauguration of a police post in Ressano Garcia. “Those who attack us, burn our houses and destroy the infrastructure are based outside the country.” (VOA 29, 30 July)

Although those calling for more war are speaking louder, there is a growing voice coming from those actually researching the war, who are presenting an alternative view. Eric Morier-Genoud, a Mozambique expert at Queen’s University Belfast, told VOA (30 July) there is little “evidence that the Islamic State is behind this group, which radicalized its positions in the face of many existing inequalities” in the Muslim-majority province. “The group has approached the Islamic State, but it has little influence yet.” The connection between the local militant group and IS “basically has been an exchange of information up to now.”

Interveners risk being linked to rights violations and exacerbating the violence

"The Southern African Development Community (SADC) is actively exploring ways to intervene, including some kind of military response. [But] SADC and member countries also risk implicating themselves in these human rights violations committed by Mozambican soldiers. … The response from Mozambique’s security forces has been characterised by coercive tactics and human rights abuses, which risks entrenching local grievances against the state. This is a challenge for any potential regional intervention: a close alignment with the Mozambican state could make it difficult to generate trust among affected communities, which is essential for any kind of peacekeeping effort.," writes Jasmine Opperman in the Mail & Guardian (26 July) https://bit.ly/Opp-MG She is part of the Cabo Ligado team (http://bit.ly/CaboLigado) and Africa Analyst at the Armed Conflict Location & Event Data Project (ACLED).

And she warns: "There is no doubt that some kind of intervention is necessary, to prevent the situation from spiralling out of control. But caution is required. Walking in blindly - without understanding the complexities at play, and without addressing some of the socio-economic factors that underpin and exacerbate the violence - could make the situation even worse,"

"Protecting people is ultimately what any successful intervention needs to be about. Treating the Cabo Delgado insurgency as just a 'terrorist' threat, and responding only with force, risks feeding the insurgents’ propaganda - and is likely to be counterproductive. Instead, as SADC mulls its response, it needs to recognise the many local drivers of discontent in Cabo Delgado - including endemic poverty and neglect by the state - and work to address these at the same time as improving security. Otherwise, no matter how many boots are on the ground, the insurgency is likely to continue unabated," she concludes.

Previous Story
Can Ruling Party Continue to Profit From Resource Curse, and Failing State?
Next Story

Can Ruling Party Continue to Profit From Resource Curse, and Failing State?

Previous Story
Tagged:
Copyright © 2020 Mozambique News Reports And Clippings. All rights reserved. Distributed by AllAfrica Global Media (allAfrica.com). To contact the copyright holder directly for corrections — or for permission to republish or make other authorized use of this material, click here.