Africa and France - an Unfulfilled Dream of Independence? 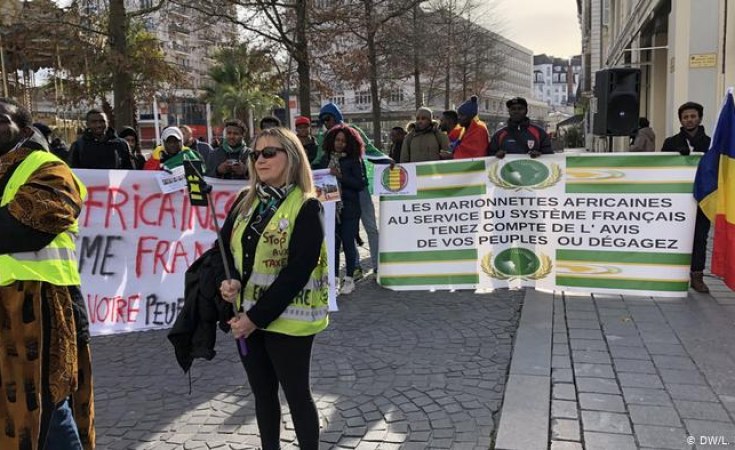 France's former African colonies are celebrating 60 years of independence. But France's influence remains all pervasive and critics say it is time that Africans cut the umbilical cord and put an end to Françafrique.

"60 years on, francophone countries in Africa still do not have true independence and freedom from France," says Nathalie Yamb, adviser to Ivory Coast's Freedom and Democracy Party (LIDER). Even the content of school textbooks is often still determined by France, she added.

But more importantly, the political system in many of the countries was introduced by France. "Shortly before independence, France decided to abolish the parliamentary system in some countries like Ivory Coast and introduce a presidential regime in which all territories and powers are in the hands of the head of state," Yamb told DW. The reason being that in this way, "only one person with all the power needs to be manipulated," she said. Françafrique, as the French influence in the former colonies is called, remains a fact, particularly galling to the young, whose resentment of the former colonial power is growing.

Beginning in the 1980s, many French presidential candidates have been announcing plans to put an end to Françafrique. But the promise of a new beginning between France and the francophone states has turned into a mere ritual, according to Ian Taylor, professor of African politics at St. Andrews University in Scotland. "They come out with statements and they want to change it. But after after a couple of years, they realize that the business interests and the kind of political interests are still very strong and there's no real will on either side to fundamentally re-balance the relationship." Taylor said.

But why do neither Africa's elites nor France seem to want to break away from the clutches of Françafrique? Researcher Paul Melly of the British think-tank Chatham House, puts the blame squarely on the shoulders of the elites intent on defending their private interests. In 1962, French President Charles de Gaulle commissioned his adviser Jacques Foccart to build up Françafrique. "Foccart built a network of personal contacts between the French leadership and the elites of the former French colonies," Paul Melly told DW. "These were often very personal connections, but they also had an opaque, very paternalistic, very controlling character."

Foccart came up with the treaties that are still in force today. In exchange for military protection against attempted coups and the payment of hefty kickbacks, African leaders guaranteed French companies access to strategic resources such as diamonds, ores, uranium, gas and oil. The result is a solid presence of French interests on the continent, including 1,100 companies, some 2,100 subsidiaries and the third largest investment portfolio after Great Britain and the United States. France also retains the right of first refusal on all natural resources and privileged access to government contracts.

France also has a considerable military presence in Africa. It leads the Barkhane operation against Islamist groups in the Sahel region, in which around 5,100 soldiers from several countries are involved. According to the US daily "New York Times", in 2007, almost half of France's 12,000 peacekeeping troops were deployed to Africa. These troops have both military and advisory capabilities as well as supporting and stabilizing the regimes of the respective countries.

The young are getting restless

All this is very frustrating, says Nathalie Yamb, who points a finger at African political and economic elites. "At the top of the system, there is no will to change. They want to continue to serve France instead of serving the best interests of their people. But the youth of Africa is more and more vocal about claiming true independence and breaking up with this insane and unhealthy relationship with France," she said.

Caroline Roussy of the Institute for International and Strategic Relations in France (IRIS), has a more nuanced view. "Independence is not complete. But we cannot compare the situation to the 1960s. France and President Emmanuel Macron have tried to change the patterns and paradigms to put an end to Françafrique," Roussy said.

A summit of the French and all African governments was supposed to prepare the way to a new kind of relationship, but it had to be postponed due to the COVID-19 pandemic. The plan was to discuss projects and solutions for building sustainable cities and regions in Africa, so as to meet the challenges posed by the massive urbanization in the coming decades.

Nathalie Yamb is skeptical."Françafrique, Afrique-France - you can play with words, but it doesn't change the system," she said. In her opinion, relations between France and the French-speaking African countries have deteriorated further under the present French president. "I even think Emmanuel Macron is one of the worst president in that sense, that he's actually like [former French President Charles] de Gaulle. He's actually not hiding his will to forcefully maintain the relationship between Africa and France."

Caroline Roussy agrees that the president made some mistakes when he first came into office. "For instance, when he convened the presidents of the G5 Sahel instead of going to see them." But he also took positive action, Roussy adds. "He placed Rwandan Foreign Minister Louise Mushikiwabo at the head of the International Organization of Francophonie and promised to return most of the African artifacts stored in French museums.

"If France loses Africa, France is nothing", Yamb counters. "Macron is trying to impose on Africa a relationship that Africans no longer want," she maintains. As an example, she points out the recent agreement between France and eight members of the Economic Community of West African States (ECOWAS) on replacing the CFA franc with a new West African single currency called Eco.

"The Eco is a very old Ecowas project, which France has decided to hijack. They say they're changing the system, but they're only changing the name," Yamb said. "It must be an initiative of an African government. It can't be announced, designed or planned by France."

According to the agreement, the Central Bank of West African States (BCEAO) will no longer have to deposit half of its foreign exchange reserves with the Banque de France as was the case until now. However, the fixed parity with the euro will be maintained, allegedly to prevent inflation. At least this will put an end to remittances from Africa to France. But it will not enable an African independent monetary policy.

In the past, African countries paid up to 65% of their foreign exchange reserves into the French treasury. "It sounds incredible but African governments don't know how much money in the treasury belongs to each individual country," says researcher Ian Taylor. He accuses France of re-declaring African money as development aid for the original depositors, thereby projecting its power in the region.

"The CFA has to go. It is such a ridiculous neo-colonial stunt by the French that it should have gone 60 years ago. The first step is to try to kill CFA, to try to actually move towards true independence for Francophone Africa, which would basically kill Françafrique", Taylor sums up. 60 years after independence, the francophone countries need African elites who are prepared to put Africa first.