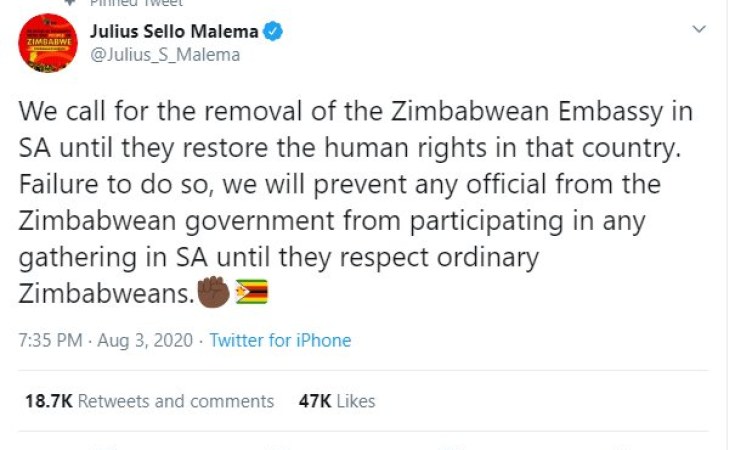 @Julius_S_Malema/Twitter
The tweet in which Julius Malema calls for the closure of the Zimbabwean embassy in South Africa.
New Zimbabwe (London)
By Thandiwe Garusa

Malema posted on his Twitter following the #ZimbabweanLivesMatter online campaign by Zimbabweans which has been receiving overwhelming support from foreign celebrities and politicians.

The campaign came after several activists were arrested and tortured for engaging in the July 31 anti-government demonstrations against high level corruption within Zimbabwean government corridors.

"We call for the removal of the Zimbabwean Embassy in South Africa until they restore the human rights in that country.

"Failure to do so we will prevent any official from Zimbabwean government from participating in any gathering in South Africa until they respect ordinary Zimbabweans," Malema said.

In a statement published Monday, EFF said the Zanu PF led government should focus on ending violence in the troubled country.

"The Zanu PF government and particularly the Zimbabwean embassy in South Africa must focus on putting an end to the violence in Zimbabwe instead of frivolous paranoia around G40 factions and the EFF," said EFF in response to the Harare's administration's recent dismissal of Malema's rants.

EFF added, "We call on the African Union and all governments in the SADC to make an intervention in the crimes against humanity being committed by the Mnangagwa regime against the people of Zimbabwe.

"These interventions must be tangible and therefore we call for the removal of the Zimbabwean Embassy in South Africa until human rights are restored in the country and the lives of people are not taken by a repressive government.

"Quiet diplomacy by SADC towards human rights violations in Zimbabwe has never worked, and it will not start working now.

"There must be an end to the arrest without trial, victimisation activists and all progressive forces must condemn the Zanu PF government for the brutality it is practicing on the people of Zimbabwe.

"We cannot keep quiet while a military regime wages war on the people of Zimbabwe."