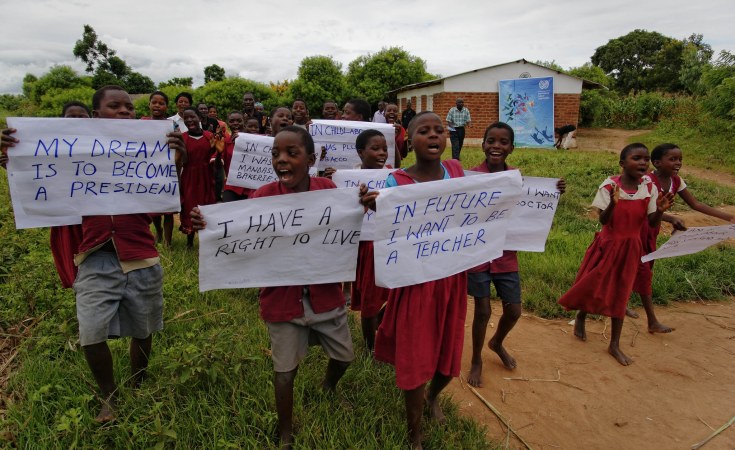 The United Nations' labour agency hailed a "historic" milestone on Tuesday in the drive to end child labour after a global treaty to protect children from sexual exploitation, forced labour and armed conflict was signed by all member states.

The International Labour Organization (ILO)'s convention against the worst forms of child labour was backed this week by the Pacific island nation of Tonga, making it the first U.N. labour treaty to be ratified by all 187 of its members.

The convention, which is legally binding on governments, was adopted in 1999 and has been ratified amid rising concerns that economic fallout from the coronavirus pandemic could reverse two decades of gains in combating child labour.

"Universal ratification ... is an historic first that means that all children now have legal protection against the worst forms of child labour," ILO director-general Guy Ryder said.

"It reflects a global commitment that the worst forms of child labour, such as slavery, sexual exploitation, the use of children in armed conflict or other illicit or hazardous work ... have no place in our society," he said in a statement.

The number of child labourers worldwide has dropped to 152 million from 246 million in 2000, according to the ILO. About 70% of these children work in agriculture and nearly half are in hazardous jobs, it said.

Yet global progress in tackling child labour has slowed in recent years - particularly among children aged between five and 11, and the COVID-19 pandemic could lead to the first rise in the practice since 2000, several U.N. agencies warned in June.

As the pandemic pummels the global economy, pushing millions of people into poverty, families may be under pressure to put their children to work for survival, campaigners say.

"The business community is both aware of and acting on the need to do business with respect for children's rights," said Roberto Suarez Santos, head of the International Organisation of Employers (IOE) - the world's largest private sector network.

"This is even more urgent in the times of the COVID-19 pandemic," he said in a statement. "We cannot allow the fight against the worst forms of child labour to backslide."

The United Nations has a target of ending all forms of child labour by 2025 - one of the 17 Sustainable Development Goals (SDGs) agreed upon in 2015 to address a range of global ills.

(Writing by Kieran Guilbert, Editing by Helen Popper. The Thomson Reuters Foundation is the charitable arm of Thomson Reuters, and covers the lives of people around the world who struggle to live freely or fairly. Visit http://news.trust.org)