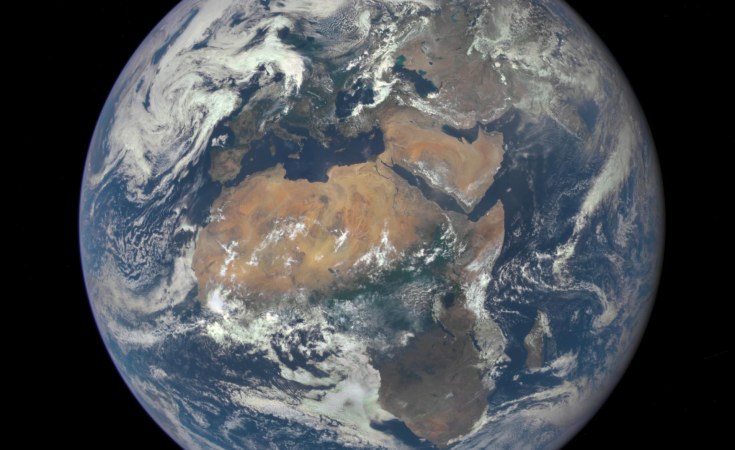 NASA
Africa is front and centre in this image of Earth taken by a NASA camera on the Deep Space Climate Observatory satellite. The image, taken July 6, 2015 from a vantage point one million miles from Earth, was one of the first taken by NASA’s Earth Polychromatic Imaging Camera.
Daily Maverick (Johannesburg)
opinion By Oluwaseun Tella

Since Nigeria launched its first microsatellite, NigeriaSat-1, in 2003, the country has expanded its space programme and is now a continent-wide leader in the field.

The launch of Sputnik in 1957 signalled the start of a space race that was confined to the superpowers of the time (the United States and the Soviet Union). However, the end of the Cold War in 1991 witnessed more states engaging in space activities.

Nigeria is one of the newcomers in the use of space technology. Since the country is not renowned for scientific and technological prowess, its success in the space domain has surprised the international community and Nigerians themselves. The motivation for developing countries' space programmes is partly to stimulate national pride and inspire the youth. However, it would be simplistic to restrict Nigeria's motives to these factors. The country's embrace of space activities stems from space's significance in fast-tracking sustainable socio-economic development and guaranteeing national security.

Given the socio-economic challenges confronting Nigeria, including widespread poverty and unemployment as well as the security situation in light of Boko Haram activities in the northern part of the country, this aspiration fits the context.

Nigeria's ambition to be a significant actor in the space...