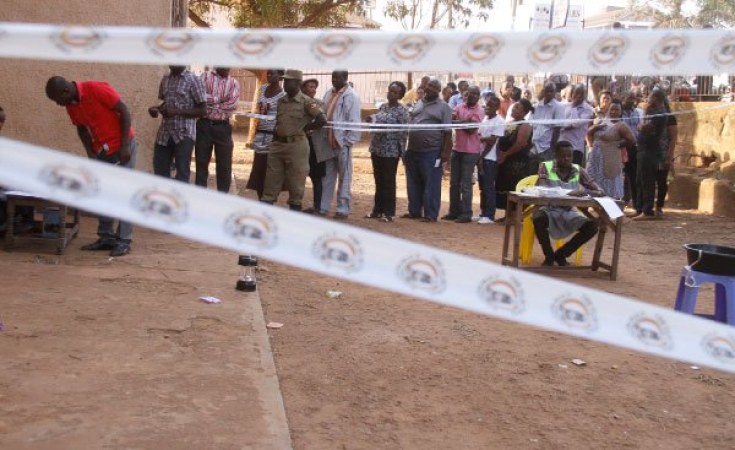 President Museveni was ahead of his main political rivals just before the coronavirus pandemic hit the country, an opinion poll to be released today shows.

Some 47 per cent of respondents said they would have voted for President Museveni if elections had been held in early March, a significant drop from the 60.8 per cent that the incumbent received in the 2016 elections, according to official figures from the Electoral Commission.

Another 22 per cent said they would have voted for musician-turned-politician Robert 'Bobi Wine' Kyagulanyi, the first-term MP for Kyadondo East. Dr Kizza Besigye, who has contested against the incumbent in the last four elections, would have come third with 17 per cent of the vote, down from 35.4 per cent in the last presidential election.

The findings are contained in the Uganda Governance Pulse, a new opinion poll conducted by Research World International, a local polling firm, on behalf of the Great Lakes Institute for Strategic Studies, a local think-tank, and the Independent Expert Peer Group of policy and public analysts.

Fieldwork was conducted in the second week of March and ended just before the country was locked down to stop the spread of the coronavirus disease. The polling firm interviewed 2,321 respondents randomly selected across the country based on the 2014 census.

Although nominations for presidential candidates are yet to happen, both leading candidates in the poll had declared their intentions by the time respondents were polled. In April 2019, the Supreme Court dismissed a petition against the lifting of presidential age limits, effectively opening the door to President Museveni, in power since 1986, to seek re-election next year.

Similarly, Mr Kyagulanyi announced in July 2019 that he would run for president in 2021. Mr Besigye, on the other hand, has repeatedly said he is "going nowhere" but has not publicly announced intentions to contest next year's presidential elections.

Mr Museveni has since been nominated unopposed as the ruling NRM party's presidential candidate while Mr Kyagulanyi's People Power movement has also morphed into the National Unity Platform, of which he is expected to be picked as flag bearer.

The poll results show that while Mr Museveni leads the field, he was below the "50 per cent plus one" threshold required to win re-election in the first round.

The Opposition is mulling fielding a joint candidate and the split showing between two of its leading lights shows the value of such a strategy. However, the long list of aspiring presidential candidates - at least 45 by one count - will make an Opposition alliance that leads to a two-horse race difficult, if not impossible.

According to the poll, Mr Museveni's support is highest in Bukedi, Lango and Tooro with 65 per cent, and lowest in Buganda at 27 per cent. Support for Mr Kyagulanyi was highest in Bugisu (39 per cent) followed by Sebei (36 per cent) and Busoga (30 per cent). It was lowest in Rwenzori and Kigezi at just two and three per cent respectively.

Dr Besigye's support was highest in Rwenzori (35 per cent) and lowest in Lango at just seven per cent. Dr Besigye's Opposition Forum for Democratic Change party made political gains in Rwenzori in the last election riding on unrest between local leaders and the central government, but appears to be losing its grip on Lango, which until 2006 was an Opposition stronghold.

While both Mr Museveni and Dr Besigye have more support in rural areas and across demographic profiles, Mr Kyagulanyi is more popular in urban areas and among male younger voters aged 18-34, the poll shows.

The removal of presidential age limits under controversial circumstances in December 2017 continues to be an issue, and one that is likely to play into the upcoming presidential and parliamentary elections.

About one in six respondents to the poll said they were opposed to the removal of the age limit with 27 per cent in support. Another 14 per cent were non-committal.

The removal of the clause allows the incumbent to contest his sixth election but about a third of respondents said Mr Museveni should retire immediately (20 per cent) or at the end of his current term next year (15 per cent).

With more than half of all respondents calling for the incumbent's departure by 2026, it is possible that Mr Museveni would struggle to win enough support to continue beyond that year should he win the upcoming election.

The poll is expected to show a high level of uncertainty about the direction of the country.

Optimism about the direction of the country was mostly in Acholi (54 per cent), Teso (44 per cent) and Lango (43 per cent) where the ruling party and incumbent continue to draw down from a post-LRA war peace dividend.

Most pessimism about the direction of the country was in the vote-rich blocs of Busoga (45 per cent) and Buganda (35 per cent), which could have a bearing on the election.

Respondents who said the country was neither headed in the right or wrong direction were mostly from Sebei (66 per cent), Rwenzori (65 per cent) and Ankole (54 per cent).

It is not clear how the Covid-19 pandemic, which has led to widespread job losses and economic pain, has changed the population's outlook about the direction of the country and, as a result, their voting intentions next year.

The perils of polling

While opinion polls help tell the public mood at any given point in time, they are not definitive, as Americans discovered with Donald Trump's unexpected win four years ago, or Britons with Brexit.

Strict controls on the collection of data by government bureaucrats and securocrats can also undermine the veracity of responses as many pollsters, including this one, acknowledge.

The passage of time and the social, economic and political impact of the coronavirus pandemic mean that while pre-crisis polls offer useful insights, the election is still far from settled, especially the rambunctious parliamentary races.

How poll was done

Sample size: The polling firm interviewed 2,321 respondents randomly selected across the country based on the 2014 census.

Fieldwork: Fieldwork was conducted in the second week of March and ended just before the country was locked down to stop the spread of the coronavirus disease

Who paid for it: The new opinion poll was conducted by Research World International, a local polling firm, on behalf of the Great Lakes Institute for Strategic Studies, a local think-tank, and the Independent Expert Peer Group of policy and public analysts

How Virtual Campaigns Will Be Conducted