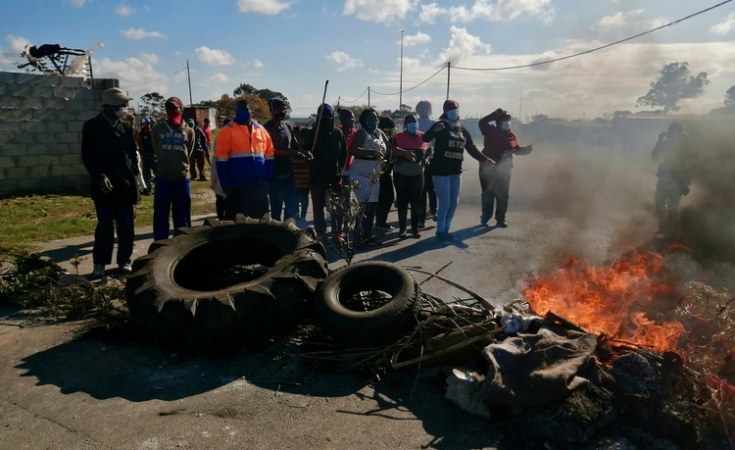 Since the COVID-19 lockdowns, the number of demonstrations has increased dramatically and leaders need to pay attention.

Protests in South Africa, like the economic fallout of the COVID-19 lockdown, are here to stay. The pandemic has exposed socio-economic weaknesses resulting from poor policy implementation and a fundamental failure of political leadership.

The country is currently caught in myriad corruption scandals linked to politically connected people stealing funds meant to help tackle the COVID-19 pandemic. So we can expect to see increasing numbers of angry South Africans taking to the streets to express their frustration and disgust at a political elite believed to be out of touch with the plight of ordinary people.

A disturbing recent example in the Eastern Cape involved Raymond Mhlaba Municipality chief whip Lindelwa Penisi. She was caught on video swearing at community members who had endured an unreliable water supply for months. Penisi reportedly redirected a water tanker to another area allegedly to 'punish' her 'political detractors.' One of the phrases she used was 'I don't give a damn!' reflecting the common view that political leaders don't care.

The gulf between the political elite and ordinary people was again on display when the leader of the Cape Town movement Gatvol (loosely translated as 'we've had enough') Fadiel Adams called for a shut down of the city. Resulting protests led to running battles with police who seemed ill equipped to deal with the angry crowds.

The 2019 national elections witnessed the lowest turnout in any of the six elections since 1994, suggesting that many South Africans are giving up on their democracy. However they haven't given up on voicing their frustration. And if the trends are anything to go by, the tough lockdown imposed by the government will result in many more protests as economic hardship and hunger sweep the nation.

The Institute for Security Studies Protest and Public Violence Monitor has been tracking and reporting on demonstrations across the country since January 2013. Although some events are missed if they aren't reported on by the media and other sources, the monitor provides a good indicator of trends over time.

The average over the past seven years has been 2.26 protests daily. Until now the highest number of incidents were recorded in 2013 and 2014 with more than three protests a day. This period was followed by reductions to nearly one per day in 2018 when Cyril Ramaphosa became president. The number started growing steadily again in 2019 to about 2.5 a day on average.

During the lockdown period of 27 March to 31 July 2020, a total of 511 protests were recorded. A worrying trend is the substantial increase in the number of events over the past couple of months. From 1 to 26 March, before the lockdown, there were 42 demonstrations, an average of nearly two a day. Between 27 March and 30 April during the strictest lockdown phase, 59 protests were recorded, an average of two daily.

From 1 to 31 May, when lockdown was eased slightly, there were 51 protests, an average of two per day. Lockdown was further relaxed in June, when 169 events were recorded - an average of six daily. During July, 232 demonstrations took place, an average of eight a day and three times more than what has been recorded historically in July. It is the highest number ever recorded in a single month since January 2013.

During this period, the Western Cape recorded the most protest action (33%), followed by Gauteng (27%), KwaZulu-Natal (17%) and the Eastern Cape (15%). These are the most populous provinces and also those hardest hit by the pandemic.

The leading cause of demonstrations was the policing of lockdown restrictions and crime (14%) with a particular focus on gender-based violence. The second most prevalent issue for those taking to the streets was labour-related concerns (13%), mainly the supply of protective equipment to staff such as healthcare workers. In third place was electricity supply problems, particularly in Gauteng as a result of power outages and restrictions during peak usage times.

More than three in five protests (62%) were peaceful with no need for police intervention. However there are examples where non-violent actions were met with disproportionate use of force by police. In Cape Town, water cannons and stun grenades were deployed against restaurant workers protesting peacefully against lockdown restrictions.

Heavy-handed policing typically results in negative publicity for law enforcement and can lead to more disruptive or violent protests. Given the continuation of lockdown restrictions along with increasingly desperate economic conditions, protests will likely continue to rise. Government, particularly at local level, must understand that the solution doesn't lie in tougher policing. Rather, meaningful engagements with aggrieved communities are needed.

There will of course be a role for the police if violence erupts. In these cases, law enforcement agencies must seek to de-escalate tensions and promote dialogue wherever possible before resorting to heavy-handed tactics.

Next year's local government elections will provide South Africans with an opportunity to vote out problematic leaders. If political parties don't heed the call to put people first, communities may try to force change through more demonstrations. The country has a long history of using protests to air grievances, and this may be the one democratic right many feel they can use to change government policy and action.

Since the COVID-19 lockdowns, the number of demonstrations has increased dramatically and leaders need to pay attention.

Police Blamed for Shooting of Boy, 11, During Protest