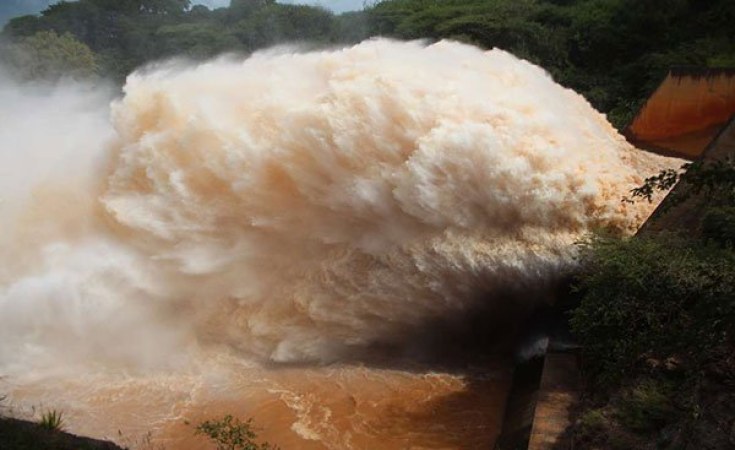 Kanyiri Wahito/Daily Nation
Water from Masinga Dam flows out of the spillway to Tana River.
The East African (Nairobi)
By David Mayen

South Sudan is appealing for help to provide relief to more than 200,000 people displaced by flooding along the Nile River.

A heavy downpour in most parts of the country, but majorly along the Nile, has seen thousands of families lose homes and livelihoods, adding to a situation that had been worsened by sporadic communal fighting.

Peter Mayen, the Minister for Humanitarian Affairs and Disaster Management said families are in dire situation.

"We are experiencing this horrible disaster. My current appeal is to all humanitarian agencies to immediately assist those affected through provision of food and medical assistance," he told The EastAfrican.

The local office of the United Nations refugee agency, UNHCR, said it was teaming up with other UN agencies to assess the needs in Bor town, Jonglei State.

The flooding has mainly hit the Greater Jonglei Region, in the central of the country, home of the vast Sudd swamp, considered a lifeline by southern communities.

Authorities this week said the flooding has led to more internally displaced people, after intercommunal violence earlier this year left many homeless.

In Bor Town - the capital of Jonglei State, The EastAfrican saw families dragging their belongings on the waters, while others crammed on small islets within the swamps.

Mabior Atem Mabior, Jonglei State General Secretary, told The EastAfrican on Wednesday that he worried children, women and the elderly had been exposed to health hazards as they slept on bare ground with limited access to clean water and mosquito nets.

"Flash-floods have severely affected the local population here. It's a horrible situation to explain. It became worse when the dyke was broken. Waters washed into buildings across the State capital and as I speak, things are getting worse," he said.

"I have briefed the Ministry of Humanitarian Affairs and we are expecting their immediate response. Am also appealing to humanitarian agencies to immediately shift their response to this area and help the needy," added Mr Mabior.

A Jonglei resident and mother of five, Amer Mabior said one of her sons contracted malaria recently - a situation she blames on lack of mosquito nets.

"We lost everything when water entered all our houses. I ran to save my children first, but I lost all my property. Waters spoiled the little foodstuff that I had for my children and now the situation is horrible, we have nothing to eat," Ms Mabior told The EastAfrican from a local IDP camp.

Yar Martha, the Executive Director for the Agency for Humanitarian Aid - a local NGO implementing a water, sanitation and hygiene (wash) project in Duk and Twic East Counties in Jonglei State says about 7,000 people have severely been affected by the flash-floods.

"If humanitarian responses such as support of basic needs and medical supplies delays, many locals will be left in an extreme situation which includes the spread of waterborne diseases," said Ms Martha.

Meanwhile, in the South Sudanese capital Juba, an estimated 3,000 residents of Gumbo were left homeless when rain waters submerged their houses on Sunday.

The Health Ministry has already warned that malaria cases have increased in some parts of the country.

Last year, severe flooding across the country affected an estimated 900,000 people, according to the United Nations Office for the Coordination of Humanitarian affairs.

The situation forced President Salva Kiir to declare a state of emergency in 27 areas affected by heavy rains and floods.

The local weatherman has said South Sudan will continue to receive more rains in the next three months.