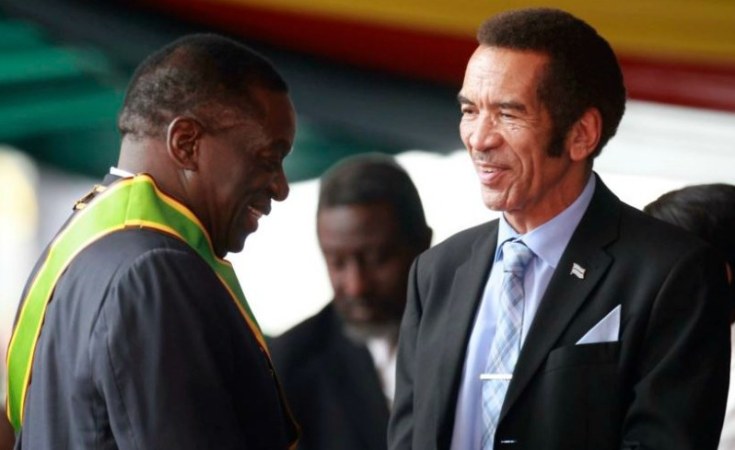 Former Botswana leader Ian Seretse Khama has emerged to land a shoulder and also call for prayer for suffering Zimbabweans in the wake of a fierce crackdown by President Emmerson Mnangagwa's government on opponents back in Zimbabwe.

The ex-leader Thursday hosted a handful of Zimbabweans in his country to commiserate with them on the plight of their compatriots back home and also endorse the world trending ZimbabweLivesMatter hashtag.

This follows the fast deteriorating human rights situation under Mnangagwa who has rolled out a brutal crackdown against opponents.

Khama later posted images of him and some Zimbabweans all decked out in t-shirts inscribed with the #ZimbabweLivesMatter statement on his Twitter with the message, "Today I hosted Zimbabweans in Serowe to share thoughts about the current regime and appreciate their plight. Martin Luther King Jnr once said, 'The silence of the good people is more dangerous than the brutality of the bad people'. So let us stand with Zimbabwe people and condemn this brutality."

During his tenure, Khama distinguished himself as the only southern African leader who spoke candidly about the Zimbabwe government's excesses, then under the now late former President Robert Mugabe.

Khama was also top ally to then firebrand opposition MDC leader Morgan Tsvangirai whom he gave sanctuary when the latter defeated Mugabe in the first round of Zimbabwe's presidential elections in 2008 before fleeing to Botswana when his life was under threat.

He would later host Tsvangirai again when the then Prime Minister was recuperating from a tragic car accident that claimed his wife March 2009.

Khama's return to land a shoulder to lean on for Zimbabweans comes amid almost similar circumstances to those of the Mugabe era after incumbent Mnangagwa has launched a brutal reaction to growing citizen dissent against his rule.

Opposition activists, journalists and ordinary Zimbabweans have been targeted for abductions, torture, arrests when they spoke against massive corruption under Mnangagwa.

Mnangagwa has also imposed tough security measures, among them a national dusk-to-dawn curfew ostensibly to try and contain a raging Covid-19 menace but critics have been quick to link the tough measures to attempts by the under-siege leader to contain a potential citizen revolt against his rule.

Mnangagwa and his government have adamantly denied claims of rights abuses, insisting the system was instead being targeted by both internal and external enemies intent on throwing spanners in its resolve to better the lives of Zimbabweans.

Zimbabwe's First Lady Implicated in Gold Smuggling Racket
Tagged:
Copyright © 2020 New Zimbabwe. All rights reserved. Distributed by AllAfrica Global Media (allAfrica.com). To contact the copyright holder directly for corrections — or for permission to republish or make other authorized use of this material, click here.