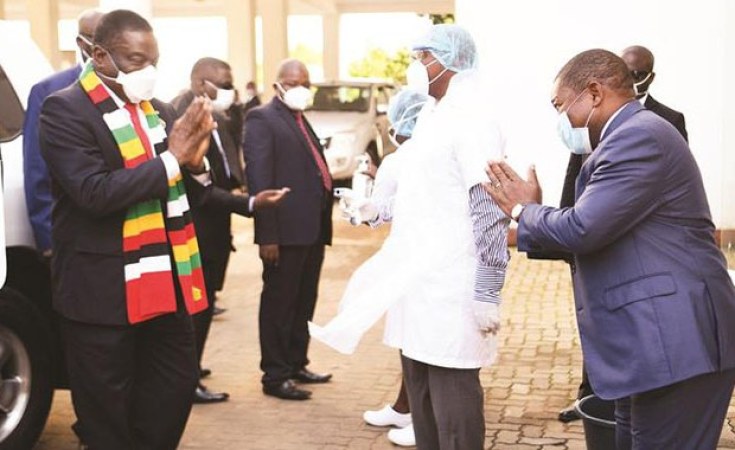 The Mozambican government, battling an Islamist insurgency which has cost more than 1 000 lives, has abandoned the idea of seeking military intervention from the Southern African Development Community (Sadc) and now prefers a bilateral arrangement with Zimbabwe, it has emerged.

There are fears that the insurgency will spill into an already fragile Zimbabwe, threatening the country's security and critical imports and exports via the Port of Beira, including vital fuel supplies.

Already, there is rising concern over the threat posed by the Renamo militia, which has carried out attacks on civilians in central and eastern Mozambique. The militants have disrupted freight on the Mutare-Beira trade corridor, which gives Zimbabwe the shortest route to the sea and poses a huge threat to the economically strategic Beira-Harare oil pipeline.

The insurgency forced Mozambican President Felipe Nyusi to seek urgent military assistance from Zimbabwe, but President Emmerson Mnangagwa -- as reported by the Zimbabwe Independent in May -- told him he preferred a concerted regional military intervention.

Dyck is widely believed to be Mnangagwa's ally.The Independent can now exclusively reveal that a series of engagements which followed a meeting of the Sadc Organ on Politics, Defence and Security on May 19 in Harare have yielded nothing as Mozambique has starkly refused to accept a regional military intervention, preferring instead a bilateral engagement with Zimbabwe.

This is despite concerted efforts by Mnangagwa -- who chairs the organ -- to bring on board the rest of the region in a joint military operation to assist the country in its battle to contain the twin rebellions which have gathered momentum in the past three years. Lesotho and the Democratic Republic of Congo complete the troika.

On the other hand, Zimbabwe says it can only intervene militarily when its interests are directly threatened, although sources say Mnangagwa's administration has already deployed specialist troops to conduct reconnaissance work and help in the training of Mozambique's commando unit, specially tailored to tackle terrorist activities.

Authoritative government sources in Harare told the Independent this week that the troika has run into a serious methodological dilemma due to Mozambique's refusal to accept a regional military effort.

The refusal emanated from Maputo's mistrust of some of the regional players, mainly Botswana and Tanzania, it has emerged.

The situation, sources said, is not helped by the fact that Zimbabwe's chairmanship of the defence troika -- which is held on a one-year rotational basis -- is coming to an end later this month and will be assumed by Botswana.

"We have a methodological dilemma in that the Mozambicans are not keen on a sub-regional intervention, whether diplomatic or militarily because they do not trust some of our member countries, particularly Botswana and Tanzania," a highly-placed official directly involved in the proceedings said. "But they are also very concerned that after Zimbabwe's chairmanship of the Organ on Politics and Defence, Botswana will assume the chair and, historically, Botswana has never been a country that one could entrust with anything with a military dimension.

"So their biggest regret is that Zimbabwe's chairmanship is ending sooner than the insurgency in their country. However, their way of going around that is to say we are not comfortable with a sub-regional approach. Instead, we prefer a bilateral approach and by bilateral, they mean Zimbabwe and Mozambique. So that's what they are comfortable with."

The source further said that Mozambique was under pressure from a number of foreign countries that have invested heavily in gas mining in the Cabo Delgado region which are against a sub-regional military intervention.

"But you will also discover that the Chinese, Americans and, to a certain extent, the Belgians and Germans who are heavily invested in that area, actually prefer a bilateral approach and have been urging Zimbabwe's intervention, of which even if we were to intervene, it would have been to protect our interests primarily, but we haven't gotten to that stage yet," a source said. "So the sub-regional approach is a level which the host country is not comfortable with since they prefer a bilateral arrangement and essentially that boils down to Zimbabwe and Mozambique."

Foreign Affairs and International Trade minister Sibusiso B Moyo confirmed the issue will now be handled at Sadc summit level.

"The security situation in the Cabo Delgado province of Mozambique was extensively discussed in the Sadc Troika meeting which was convened by HE President ED Mnangagwa as chair of the Sadc Organ on Politics, Defence and Security Co-operation on 19 May 2020 in Harare. The Sadc region continues to offer unwavering support to and solidarity with the government and people of Mozambique over the issue," Moyo said in response to questions sent to him via e-mail. "However, follow-ups on the issue have been affected by the Covid-19 pandemic. It is important to note that the security situation, not only in Mozambique, but the entire Sadc region, remains on the agenda of Sadc and will be discussed during the Ordinary Summit of Heads of State and Government scheduled for August 2020. This is because, if not properly managed, the security situation in Mozambique has the potential to affect the entirety of the Sadc region and beyond.