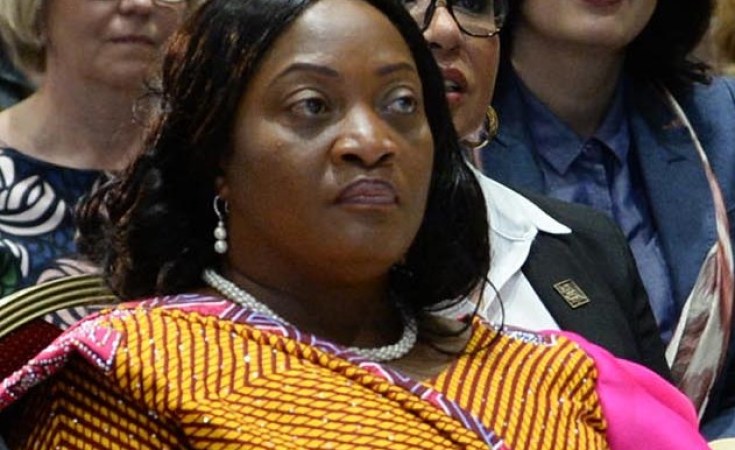 The vice president was initially admitted to the privately run Aspen Medical Facility within the Sinkor neighborhood in Monrovia, on 7 August and was undergoing treatment for respiratory complications, according to a release provided by her office.

She was flown to Ghana for treatment based on her doctors' advice.

"Having favorably responded to treatment and the state of her health stabilized, it was advised that the Vice President seeks further medical attention at a more advanced facility with specialty in the diagnosis and treatment of respiratory ailments," said the release.

Howard-Taylor was among several public officials, including President George Weah, who paid tribute to the late Representative Munah E. Pelham -Youngblood on the grounds of the legislature that same Friday, 7 August.

The late Pelham-Youngblood who represented Montserrado County District#9 prior to her death, died in Accra, Ghana while undergoing medical treatment following a long illness.

However, following public outcry, LINA apologized to the general public for the inaccuracy of the report.

"LINA therefore apologizes to the general public for the inaccuracy of the report which was a result of an inadvertent crack in the editorial review mechanism of the Agency," it wrote.

In the wake of a continuing decline in the country's health sector, many in the country are disenchanted over the low budgetary allotment for healthcare.

Bendu Massaray, 56, is among many Liberians who are upset about the constant stream of public officials flying abroad for medical treatment.

"We suffered to pay our taxes, and through the taxes we pay those officials. Instead of them fixing the challenge facing the health sector, they are using resources to go abroad," she says.

Since the end of the country's civil war in 2003, not much attention has been given to the health sector by the past and present governments, she adds.

"This is Liberia, go and see public hospitals," says Massaray, indignant. "At times you go and there is no medicine, some of the nurses there are not motivated-- the needed care is no longer provided for us, the poor,' she says.

Petit trader Oujuku Acquoi spoke to RFI in central Monrovia, and says the government has failed to meet its international commitment of allotting 15% of its national budget to the health sector.

He is referring to the 2001 African Union conference in Abuja, Nigeria, where member states pledged to increase their health budget to at least 15% of their respective national budget and requested western donor countries to increase their support.

Ojuku is angry that many healthcare centers in the country are gradually turning into prescription clinics due to limited supply of essential medical materials.

He says if nothing is done urgently, a breakdown of vital health services is likely.

Liberia's health authorities are currently reviewing the sector and are expected to report findings in ten days to readjust existing health protocols and give the response budget to President Weah.