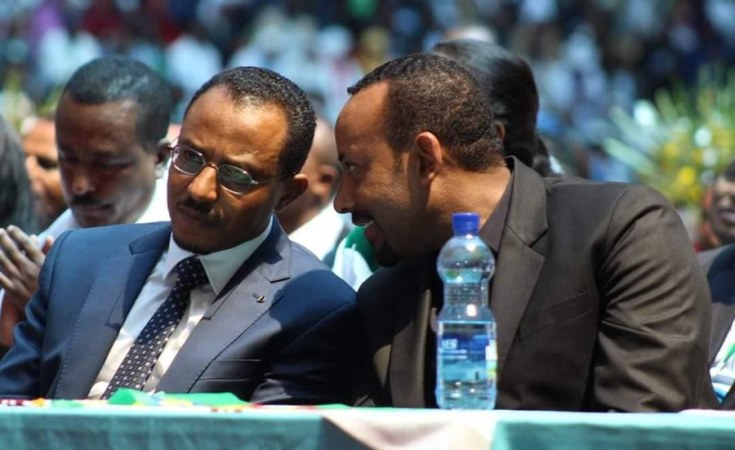 9th organizational conference of then OPDO in Jimma city. It was at this conference that OPDO officially changed its name to ODP only to later on merge to make up Abiy's new Prosperity Party (PP) causing the first rift between the two.

Ethiopia Insider, an online based local news media, also confirmed the news a few minutes ago.

According to three sources who spoke to Addis Standard, he was told on Tuesday night by General Adem Mohammed, the Chief of Staff of the Ethiopian National Defense Forces, that he should "stay put" at his residence off Bole avenue "until further notice was issued."

Yesterday, some of his staff members at the Ministry of Defense, including his secretary, were barred from accessing his office, which was later on searched by members of federal police forces, two sources from the Ministry confirmed.

Lemma was appointed as Defense Minister on April 18 2019. He made history as the first President of Oromia regional state to have ever been unanimously elected by the regional Council (Caaffee) in the intense midst of the Oromo protests in October 2016. He doubled the Chairman of then Oromo People's Democratic Organization (OPDO). But on February 22 2018 he gave his seat up for PM Abiy, then his deputy, a move that paved ways for Abiy to assume EPRDF's chairmanship, a de facto position to become the next prime minister in the wake of the resignation of former PM Hailemariam Desalegn a week earlier.

But Lemma's relationship with PM Abiy soured after he openly criticized the PM's move to dismantle EPRDF in favor of the current Prosperity Party (PP), guided by Abiy's philosophy of "Medemer" (Synergy). In November 2019, Lemma said he does not subscribe to both "Medemer" as a philosophy and the merger of EPRDF to form Prosperity Party, a move seen by many as a major blow to PM Abiy.

Although Lemma proclaimed to "narrow his differences and work together," the relations between the two former allies never recovered since then. However, tension rose high between PM Abiy and Lemma following the assassination of Prominent Oromo artist Haccaaluu Hundessa and the breakneck crackdown that saw leading Oromo opposition figures, journalists, activists and academicians jailed. Several sources confirm to Addis Standard that Abiy accuses Lemma of having relations with Jawar Mohammed, PM Abiy's one time ally-turned-fierce critique, who is now in prison. AS

Editor's Note: Addis Standard will have an upcoming clarifying scoop on the widely circulated news of the suspension of Lemma Megerssa and two others from the Central Committee membership of ODP and the House of Federation.

Dozens Dead in Protests After Death of Oromo Singer in Ethiopia
Tagged:
Copyright © 2020 Addis Standard. All rights reserved. Distributed by AllAfrica Global Media (allAfrica.com). To contact the copyright holder directly for corrections — or for permission to republish or make other authorized use of this material, click here.