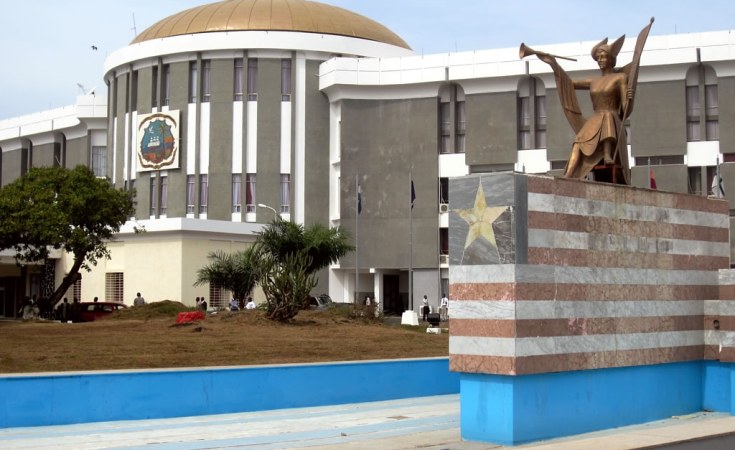 The committee, which was established to investigate complaints from staffers against Sen. Morris Saytumah of Bomi County over persistent salary cuts, found that the payroll submitted to them for investigation by Saytumah contains lots of disparities, where employees of the same rank are not paid equally. Senator Saytumah chairs the Senate committee on Ways, Means, and Finance.

"We also observed disparity in the payroll where employees of the same status are making more than their colleagues in other departments. The most frustrating thing we saw is that there is an office manager in an office of a Senator who makes more than a chief of office staff to a Senator and that is something that needs to be reviewed," Sen. Gaye said last week while presenting his committee reports.

The committee, which also comprises Senators Abraham Darius Dillon and Henrique Tokpah of Montserrado and Bong Counties, respectively, also found that the Senate workforce of 802 employees is "very huge and outrageous in responsibilities of each of the departments and the work environment. So it appears that the payroll issue is a scam," they said, and that there is need for it to be cleaned up.

According to Senate Pro Tempore Albert Tugbe Chie, the pending reshuffle of senior staff in the central administration of the Senate is to enhance efficiency and productivity in all departments and sections.

The Pro Tempore's decision, which was communicated in a meeting with staffers of the Liberian Senate early this week, focuses on the findings of the ad-hoc committee which includes reviewing in detail the application of US$557,002.00 for the augmentation of the compensation of Senate staff and employees, the review of payroll in detail, measures to streamline and clean it, as well as reviewing the organizational structure of it central administration for possible changes to enhance the performance of tasks and delivery of service.

"All new employment, including direct replacement, is frozen with immediate effect, until the completion of the next phase of the committee," Senator Chie said.

Adding, he said that the Sen. Gaye committee headed will continue its work from where it stopped, relating to the compensation of Senate staffers -- a move that was supported by other senators with additional suggestions which includes an invitation the General Auditing Commission to conduct an audit on the Senate staffers payroll.

The audit, according to lawmakers, will also help find a remedy to the huge disparity in salary among the staffers and employees. However, concerns are said to be mounting among staffers about the news that a great number of individuals on the Senate staff payroll will sooner or later be out of work at the Capitol Building.

Meanwhile, as promised during his discussion with the staffers early this week, Pro Temp Chie has informed staffers' that their salaries would be ready before the end of this week.

In his briefing notes, Protemp Chie said the Senate Leadership will work along with its ad hoc committee to engage the appropriate authorities in the Executive Branch about the possible restoration of Senate Staff compensation to pre-2019/2021 national budget level.

During his meeting with the staff, the Pro Temp said "an agreement has been reached" with the lower house to include four representatives on the ad hoc committee to expend it scope of operations to include staffers of the House of Representatives.

In its next terms of reference, the ad hoc committee is mandated to try and understand the circumstances which led to the cutting of the Liberian Dollar component from the compensation of Senate staff and employees in the 2019/2020 national budget; holding of discussion with the Ministry of Finance and Development Planning, along with the Senate Leadership, on the possibility of renovating amount in question.

The Senate staffers' accusation against Sen. Saytumah, which resulted in a wave of protests that the Senate, was that he was extorting money from them under the government salary harmonization scheme carried out by the Ministry of Finance and Development Planning.

But both the Ministry and Vice President Jewel Howard Taylor later disclosed that harmonization did not affect the Legislature. Despite these revelations, Sen. Saytumah, who has been previously alleged to be involved in corrupt activities while serving in the Executive Branch during the administration of former President Ellen Johnson-Sirleaf, has denied the Ministry's and the VP's assertions that the Legislature was not affected.