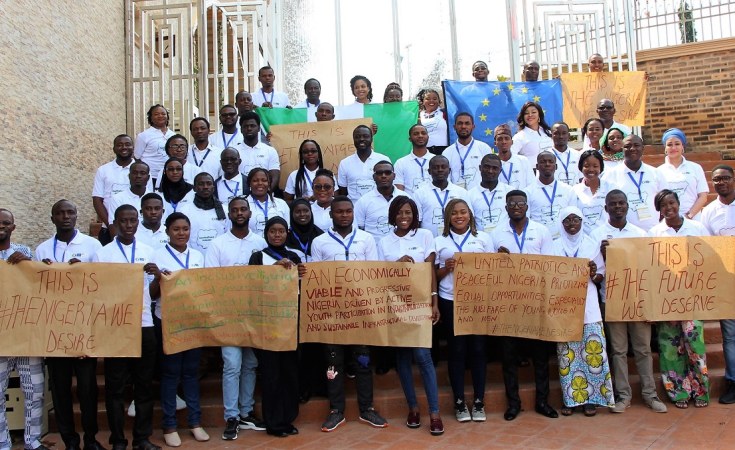 ECOWAS
ECOWAS, AU Convene Youth Dialogue In Nigeria Towards The Promotion Of Peace And Security (file photo).
This Day (Lagos)
By James Emejo

The number of unemployed Nigerians rose to 21.77 million in the second quarter of this year (Q2 2020), compared to 20.93 million in Q3 2018, according to figures released by the National Bureau of Statistics (NBS), yesterday.

The NBS noted that the figure represented an increase of 836,969 persons who were without jobs when compared to Q3 2018.

However, unemployment rate is estimated at 11.7 per cent, using the international definition.

The number of people with jobs stood at 58.52 million, while 22.94 million people were engaged in time-related jobs or underemployed, as well as 35.59 million persons who had full-time employment.

The working age population is estimated at 112.39 million with an active labour force of 80.29 million, while 32.10 million people are not currently in the labour force.

According to the Labour Force Statistics' "Abridged Labour Force Survey Under COVID-19" report, which was released yesterday by the statistical agency, underemployment rate increased to 28.6 per cent from 20.1 per cent in Q3 2018.

It added that unemployment rate among rural dwellers increased to 28 per cent compared to 23.9 per cent in Q3 2018, while urban dwellers reported a rate of 25.4 per cent up from 21.2 per cent.

According to the statistical agency, the labour force, which is the number of people who are able and willing to work (within the ages of 15-64) increased to about 80.29 million, compared to 90.5 million in Q3, 2018, representing 11.3 per cent decline.

However, those within the age bracket of 25-34 represented the highest number in the labour force accounting for 23.32 million or 29.1 per cent of the work force.

In addition, 32.09 million of the population were said to be out of the labour force currently.

losses, since those people previously had jobs and were already in the labour market, which does not change as a result of them losing their jobs.

Rather, what causes an expansion in the size of the labour force is the increase in the number of persons within the working age population, who were previously not willing or able to work, but who are now available and actively looking for work."

On states level however, Imo State reported the highest rate of unemployment with 48.7 per cent, followed by Akwa-Ibom 45.2 per cent and Rivers 43.7 per cent.

States with the lowest unemployment rate include Anambra, Kwara and Sokoto with 13.1 per cent, 13.8 per cent and 13.9 per cent, respectively.

Bauchi recorded the highest rate of underemployment with 43 per cent followed by Yobe and Adamawa, which both recorded 38.4 per cent.

In terms of both unemployment and underemployment, Imo recorded the highest rate with 75.1 per cent followed by Kaduna 72.8 per cent, Kwara 34.2 per cent and Oyo 34.5 per cent.

The report moreover estimated that 2.73 million persons or 3.4 per cent of the labour force did not work during the period but had secured jobs to return to after the COVID-19 lockdown.