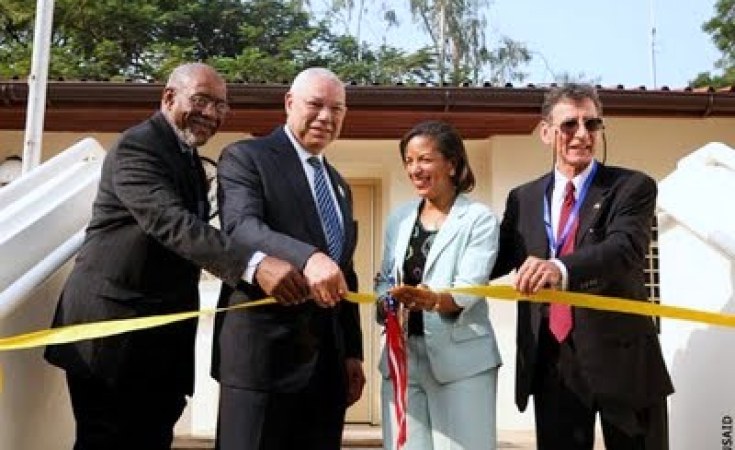 Washington, DC — In an open letter, 49 former high-ranking U.S. officials – many of whom served as American ambassadors in Africa - take strong issues with a New York Times column last week by Brett Stephens entitled Susan Rice Was a Diplomatic Disaster. The signatories include two Republicans who succeeded Rice as Assistant Secretary of State for Africa – Walter Kansteiner and Jendayi Frazer, as well as the two former ambassadors who held that post during the Obama administration – Johnnie Carson and Linda Thomas-Greenfield. Rice held the Africa post during President Clinton's second term and was President Obama's ambassador to the United Nations and national security adviser and was a finalist for the Democratic vice presidential selection. The initial version of the letter with 47 signatures was published by Axios late Thursday. An updated version with 49 endorsers is published below.

The recent op-ed in the New York Times by Bret Stephens attacking Susan Rice’s track record in Africa clearly illustrates one thing: he doesn’t know the African continent. In fact, the Susan Rice that is often depicted by her critics, such as Stephens, is unrecognizable to those of us who have worked with her and reflects a cherry-picking style of journalism divorced from context, nuance and knowledge.

Foreign policy is a relentless exercise in managing complexity and choosing among imperfect options. Africa is no exception. To over-simplify this complexity in the cause of character denigration in order to exploit what remains one of the few remaining – if not the only – bipartisan foreign policy issues is damaging to U.S. interests and partnerships in this critical region. It is also condescending to the diversity of challenges and opportunities, past and present.

As Assistant Secretary of State for African Affairs from 1997-2001, Susan Rice was tireless in her effort to bring peace to the region and simultaneously transform the U.S.-African relationship into one based on mutual respect and benefit.

One of her signature achievements was spearheading a multinational peace process, including an array of African diplomatic partners, that ended the war between Ethiopia and Eritrea—at the time the deadliest war in the world. As a young mother at the time, she risked her life flying between the two countries in the midst of an aerial and land conflict to achieve the Algiers Agreement that is enduring to this day.

Rice undertook repeated diplomatic missions to the continent in search of a negotiated end to the conflict in the Democratic Republic of the Congo. She effectively used American leverage to help stop a war within a war on Congolese soil between Uganda and Rwanda, and supported African efforts to broker the deal that paved the way for the withdrawal of the many countries that had inserted themselves into the Congo war. During that same period, she and other American diplomats worked closely with Nelson Mandela in mediating the peaceful resolution of a deadly war in neighboring Burundi.

In response to the massive human rights abuses being perpetrated by the Government of Sudan against the people of Darfur, Rice helped build a negotiating framework that involved African states, the U.S., the UK and Norway. She drove the effort to sanction Khartoum in the

U.N. Security Council and helped to craft the comprehensive unilateral U.S. sanctions on Sudan. As U.S. Ambassador to the UN, she worked assiduously to ensure that the referendum for South Sudan’s independence occurred peacefully and as scheduled.

Her response to the destruction of our embassies in Kenya and Tanzania —the most devastating attack in our history on our embassies — illustrates her deep concern for the dead and injured and her ability to respond to a terrorist attack. She worked tirelessly to mobilize our response and to find and bring to justice the guilty, while providing emotional and financial support to families of the hundreds of injured and dead.

Rice was also focused on changing how Americans view the continent. When she became Assistant Secretary, one of the youngest in the history of the State Department, she faced an uphill battle. The predominant view of Africa was most forcefully articulated by Senator Jesse Helms (R-NC), who argued that aid to Africa was pouring "money down a rat hole." This attitude led to the closure of USAID offices across the region and slashing U.S. development assistance in health, education, and other social programs during the mid 1990s.

As Assistant Secretary, she made it her goal to make America a true partner in Africa’s development. She accompanied President Bill Clinton on his unprecedented visit to Ghana, Uganda, Rwanda, South Africa, Botswana, and Senegal—the longest trip in Clinton’s presidency. Together they highlighted the democratic and economic progress being made on the continent. On the strength of that visit, she persuaded Clinton to restore American aid levels to their historic levels.

From her position in the State Department's Africa bureau, she enthusiastically championed the passage of the African Growth and Opportunity Act in 2000 – a transformative piece of legislation that began to move the U.S. relationship with Africa from aid to trade – and which helped to generate a strong, bipartisan Congressional coalition willing to invest in U.S. initiatives in Africa. During the Bush Administration, this coalition supported the successful PEPFAR and Millennium Challenge Account initiatives. This bipartisanship was reflected in the extension of AGOA to 2025 during the Obama Administration, and most recently, the creation of the U.S. Development Finance Corporation.

One of Rice’s most enduring qualities is that she has always been a team player – from her time as point guard on her high school basketball team to her time as assistant secretary. She recruited respected and competent professionals to the Bureau of African Affairs. She encouraged divergent views, and built consensus within her team, at the White House, and with the Congress. In doing so she became the catalyst for a foreign policy that sought to put Africa on equal footing with the rest of the world.

One of the usual victims in the politics of personal assassination is the truth. This phenomenon holds in the current extrajudicial “trial” of Susan Rice. Her record is being examined with a microscope and a telescope, at times refracting the light so completely that original facts become completely obscured. Such is the case with much of the examination of Ambassador Rice’s record on Africa, particularly when she was the Clinton administration’s lead diplomat toward that continent.

What should endure about Susan Rice’s relationship with Africa—and her record—is that she cared deeply about Africans and Americans, and that she was effective in bringing peace, prosperity and democracy to the continent.

Previous Story
What Would a President Biden Do About Africa?
Next Story
Continent's Wish List of What Might Change Under a Biden Presidency

What Would a President Biden Do About Africa?