Kenya: Lessons From a Community-Driven Rabies Vaccination Campaign in Kenya 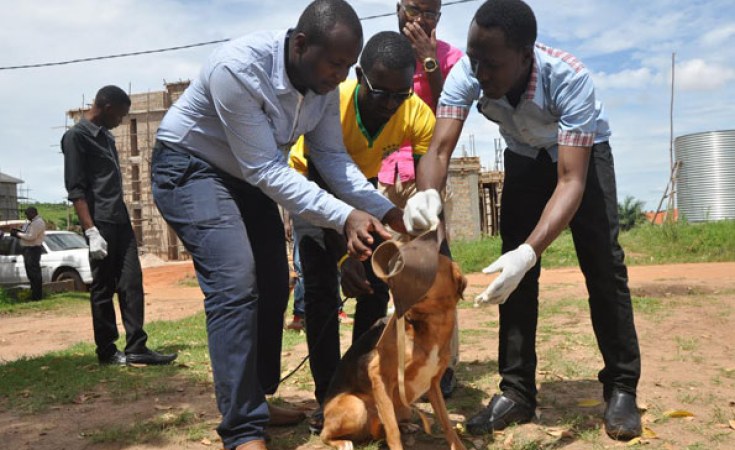 Every year, approximately 60,000 people die from rabies. Most of these deaths are children - who are often less able to defend themselves from animals - in sub-Saharan Africa and Asia.

Rabies is usually transferred through saliva from the bite of an infected animal, with dogs being the most common transmitter. The disease infects the central nervous system causing disease in the brain and eventual death. Once clinical symptoms appear, rabies is virtually 100% fatal.

In Kenya, rabies is estimated to kill up to 2,000 people every year. To address this, Kenya's Zoonotic Disease Unit launched a strategic plan with the aim of zero human deaths from dog transmitted rabies by 2030.

Rabies can be prevented through vaccination campaigns that target domestic dogs or, in the case that someone is bitten, the administration of a human vaccine. Dog vaccination is a more cost-effective measure to prevent rabies, as animal vaccines are much cheaper than human vaccines.

In 2015 my colleagues and I launched a campaign in response to an increased incidence of rabies in humans in Laikipia County. Coupled with this was the need to protect the local population of wild dogs - a globally endangered wildlife species - from the disease.

Laikipia is a unique landscape composed of privately-owned conservancies and agro-pastoral communities, where humans, wildlife, and domestic animals, including domestic dogs, regularly interact. This shaped our desire to create a partnership between conservancies, communities and government entities that would work together to eradicate rabies.

Mass vaccinations of domestic dogs are effective at eliminating rabies but require large amounts of resources, planning, and political will to implement. However, this is a challenge in low-resource settings where rabies might not be a public health priority.

Our project, by contrast, was driven by the grassroots and was volunteer-led. It raised awareness and provided vaccines for cats and dogs in an area of about 1500km². Over three years (from 2015 to 2017), we vaccinated 1,040 cats and 13,155 dogs in 17 communities.

The project also grew. It went from being a local campaign to a county-wide rabies elimination effort after the county and national governments recognised it as an effective programme.

This provided us with some key insights into the successes, failures, and challenges with rolling out a grassroots rabies campaign.

It proved that a community-based low-cost campaign could successfully implement a rabies campaign. This is important in pastoralist communities where domestic dogs are less likely to be vaccinated and also where people are less informed about rabies and vaccines.

In the following years, we aim to vaccinate at least 70% of dogs in the region, with a particular emphasis on mobile communities. This vaccination coverage rate is sufficient to control canine rabies.

There are a couple of major challenges when it comes to rolling out rabies campaigns in more marginalised areas.

Firstly, the communities are mobile, which means their dogs are less likely to be vaccinated and it's hard to reach them.

Secondly, the communities are less informed about rabies and how the vaccinations work. For instance, in 2016 and 2017 we experienced a 50% decline in vaccination coverage in three pastoral communities because they believed the vaccines killed their dogs. During the same period, there was a canine distemper virus outbreak across the county which killed many domestic dogs and wild carnivores.

These challenges highlight that vaccines alone are not enough. There is a need for local engagement and community involvement, even before vaccination efforts begin. These must be carefully planned so that they effectively raise awareness of rabies control. Three core groups of people were instrumental in this effort: veterinarians, researchers, and university students.

We used various avenues to educate the public about rabies. For instance, we engaged 12 primary schools and taught hundreds of children about rabies, its side effects, and how we can work to eradicate it together. We also tried to educate communities using sound trucks.

These efforts helped to increase buy-in from local communities.

After the community was sensitised about rabies, people would then bring their dogs to the vaccination station on a particular day. Upon arrival, the dog's details are taken down and it's issued with a shot of rabies vaccine. The dog was then marked on the forehead with paint so that follow-up teams know it's been vaccinated, and the owner is issued with a vaccination card signed by a veterinarian. For remote pastoral communities we had an additional mobile team for door-to-door vaccinations.

Our project also wanted to test the hypothesis that a grassroots campaign could implement a successful vaccination campaign, similar to well-funded and permanently staffed efforts.

Money saved from volunteer hours contributed and in-kind support from conservancies meant that we used approximately Ksh4 million (about US$40,000) over the three years. This meant we achieved a cost per dog of about Ksh370 (about US$3). This is within the range of other, large-scale and well-funded campaigns.

Of course, running a completely volunteer-based campaign was not without its drawbacks. Limitations included;

Sustained funding (beyond in-kind contributions) was a limiting factor for expanding our vaccination efforts at scale.

Larger and more remote areas characterised by lower human population densities were challenging to work in due to poor accessibility and vast areas to cover.

Restricted flexibility with scheduling as volunteers may have other commitments.

The lack of a centrally funded project leader to guide vaccination inhibited our ability to implement a completely successfully campaign.

Nonetheless, this project provided a unique opportunity to highlight successes and failures for other future campaigns. We look forward to learning from the challenges and amplifying the successes to expand it further and eradicate rabies from Laikipia County.