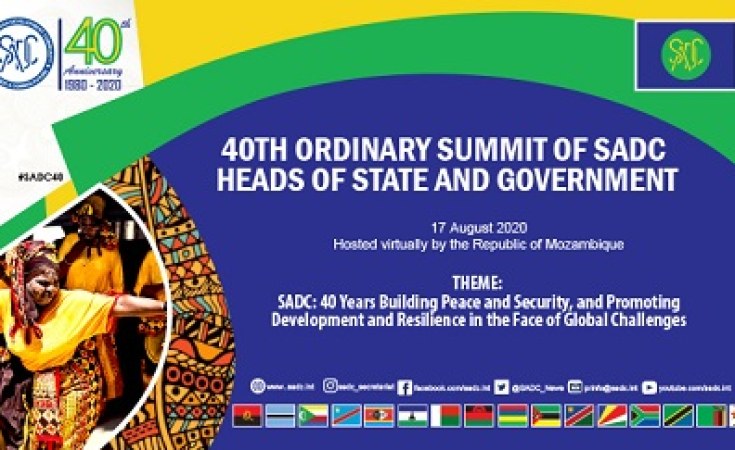 SADC Website
The SADC's Ordinary Summit of Heads of State and Government is to be held on August 17, 2020.
United States Department of State (Washington, DC)
document By Morgan Ortagus, Department Spokesperson

The United States Government congratulates the Southern African Development Community (SADC) as it celebrates its 40th anniversary. SADC's goals of promoting regional cooperation and integration, economic growth, socio-economic development, and durable peace and security among its member states have never been more salient.

SADC has achieved notable successes promoting regional peace and security and economic development for the betterment of the SADC region's most important resource -- its people. SADC's enduring support helped Lesotho negotiate vital government reforms and undertake a peaceful transition of political power. It continues to promote regional peace and security as demonstrated by its positive role in helping Zambia and the Democratic Republic of Congo resolve a longstanding border disagreement. And through its Southern African Power Pool, SADC is mobilizing resources to address energy shortages that threaten regional development and economic integration.

We encourage SADC to play a proactive role in promoting good governance, respect for human rights, and democratic values, and to hold its members accountable when they fall short. By insisting that all its members adhere to the same universal standards of human rights protection and respect for the rule of law, SADC can send a powerful message that it intends to be a force for positive change for all citizens across southern Africa.

Previous Story
Chakwera Delivers Maiden Speech At SADC Virtual Summit - 'Malawi Not Landlocked but Landlinked'
Next Story
SADC, a Regional Integration Body or a Private Club for the Heads of State?

SADC, a Regional Integration Body or a Private Club for the Heads of State?

Next Story
Tagged:
Copyright © 2020 United States Department of State. All rights reserved. Distributed by AllAfrica Global Media (allAfrica.com). To contact the copyright holder directly for corrections — or for permission to republish or make other authorized use of this material, click here.