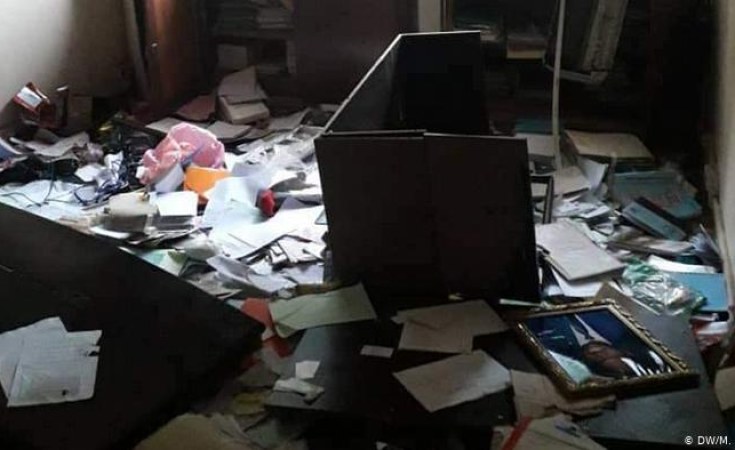 M.Kane/Deutsche Welle
Protesters ransacked the office of the Finance Ministry in the wake of the bloodless coup.
Deutsche Welle (Bonn)
analysis By Isaac Mugabi

Mali's opposition groups have vowed to work with the military officers who deposed President Ibrahim Boubacar Keita this week. They are calling on the people of Mali to rally behind the junta.

"We will organize the biggest patriotic rally on Friday," Choguel Maiga, a leader of the opposition coalition June 5 Movement - Rally of Patriotic Forces, known as M5-RFP, told journalists. The nationwide gathering would "celebrate the Malian people's victory."

In a statement, the coalition said that "it took note of the commitment" the junta has made to "open a civilian political transition" and pledged to work with it on "developing a roadmap."

"We must all come together, military and civilian, to defend the republic and impose democracy and good governance and the secular nature of our state," the statement read.

Issa Kaou Djim, a member of the strategic committee of the M5-RFP told reporters: "The military are Malians, they are patriots who have only supported this democratic, republican, secular struggle of the M5-RFP which was carried by the sovereign people of Mali. So this is only the culmination of a process that was set in motion by the people of Mali."

"The military comes from the people and shares the same suffering as everyone else. They are fighting terrorism on a daily basis, and the means at their disposal that were promised have been squandered and misappropriated," Djim said.

Three days after the coup that forced President Ibrahim Boubacar Keita to resign, there is a power vacuum in Mali, and fears that the country could slip into anarchy. Terror groups linked to al-Qaida and "Islamic State" (IS) could take advantage of the country's political crisis.

In Bamako, DW's Mahamadou Kane asked residents of the capital how they regard the dramatic turn of events this week.

"I can't say that I am happy or sad. Currently, I see that it is calming down, the situation is stable. We used to be a little frustrated," Lassine Doumbia, a trader told Kane.

Oumar Traore, a road transporter, said he supports the junta. "What we need is the use of force to make people respect authority. As a first step, we must let the military rule the country for the next five years for stability," Traore said.

Harouna Kone, a mobile phone repairer, told DW he believes that without good governance, Mali will lag in terms of development.

"From my point of view, the real problem plaguing Mali right now is this large-scale corruption. The future leaders of the country must address it very quickly," Kone said. "That should be the top priority, in my opinion. It does not matter whether it is soldiers or civilians who have to lead this fight against corruption. Choosing the right people is essential here."

"We have no political ambitions. Our objective is to quickly transfer power to a civilian transition through the various meetings with sociopolitical groups," Goita said, "The state is continuity, and we are all aware today of the socio-political and security situation that Mali is going through. To reassure you, you must continue your work and without pressure."

However, a representative of the deposed government, Cheik Oumar Maiga, responded: "The general secretaries expressed their concerns in this delicate period in which there is no government concerning the means to carry out their duties and the backlog of files that have been piling since the government's resignation."

A coalition of armed groups in northern Mali have also indicated that they are ready to work with the junta.

The Coordination of Azawad Movements (CMA), an alliance of Tuareg independence and Arab nationalist groups formed during the Mali conflict of 2012, reached out to the junta leaders. The groups have demanded that the junta preserve the Algiers peace treaty signed in 2014.

Realizing the main objective of the treaty - bring all warring factions in northern Mali together and restore peace -- has proven difficult, Mali without a recognized leadership now raises fears of a full-blown conflict.

In an interview with DW, CMA leader Fahad Ag Almahmoud said the alliance has followed developments in Bamako closely and is ready to work with the military leaders.

"We are Malians who have always fought for the recovery of Mali, the territorial integrity of Mali. We are ready to work with all Malians who share these values," Almahmoud said. "If it is the military in charge, we will work with it."

The CMA has said that Economic Community of West African States (ECOWAS) had no clear plan to help Mali out of the political crisis under Keita's leadership and urged neighboring countries to work more closely for the sake of peace in the region.

"I think that there was no strategy to get Mali out of the crisis. I believe that the ECOWAS states and all other states must act with responsibility. That is to say, support Mali to recover from the crisis. If we push Mali [into the crisis], Ivory Coast, Burkina Faso, Niger, and Senegal will not be spared," Almahmoud said.

The alliance downplayed fears that militant jihadis could take advantage of the power vacuum and carry out attacks.

"It should be noted that it is the military that is already facing the jihadists. If they blame the political authorities for not doing their job well, then I suppose they have themselves to blame now that they have become decision-makers. They will face the jihadists better," Almahmoud said.

German Chancellor Angela Merkel has joined the chorus of international leaders who have condemned the coup and called for the immediate release of Keita, Prime Minister Boubou Cisse and other officials who were detained by the military on Tuesday.

"We condemn the military coup. We are working for stability and peaceful conditions in Mali," Merkel told reporters on Wednesday. "The focus must be on the fight against terrorism in the country. And we support the efforts of the regional organization ECOWAS to find a political solution now."

Merkel said she believed it was very important for members of the West African bloc to exert their political influence to achieve 'the best possible solution" to support peace in Mali.

United Nations Secretary-General Antonio Guterres said he "strongly condemned the military mutiny" and called "for an immediate restoration of constitutional order and the rule of law in Mali."

Guterres' spokesman, Stéphane Dujarric, said the UN chief wants to see a "negotiated solution and peaceful resolution". Guterres also fully supports the African Union and ECOWAS in their efforts in that regard.

"Our colleagues on the ground are emphasizing that the work of the UN peacekeeping mission must and will continue in support of the people of Mali and in close liaison with the Malians, including with the Malian security and defense forces in the North and center where the situation is still very worrying," Dujarric added.

France has over 5,000 troops deployed as part of its anti-jihadi Barkhane force in the Sahel Region.

The insurgency that erupted in Mali in 2012 has claimed the lives of thousands of civilians and soldiers.

Frejus Quenum contributed to this article.

Mali Coup - Democratic Order Must Be Restored 'As Fast As Possible'

Another Mutiny Turned Coup - Mali No Stranger to Military Unrest
Tagged:
Copyright © 2020 Deutsche Welle. All rights reserved. Distributed by AllAfrica Global Media (allAfrica.com). To contact the copyright holder directly for corrections — or for permission to republish or make other authorized use of this material, click here.