Congo-Kinshasa: DR Congo - Felix Tshisekedi Moves Closer to the US 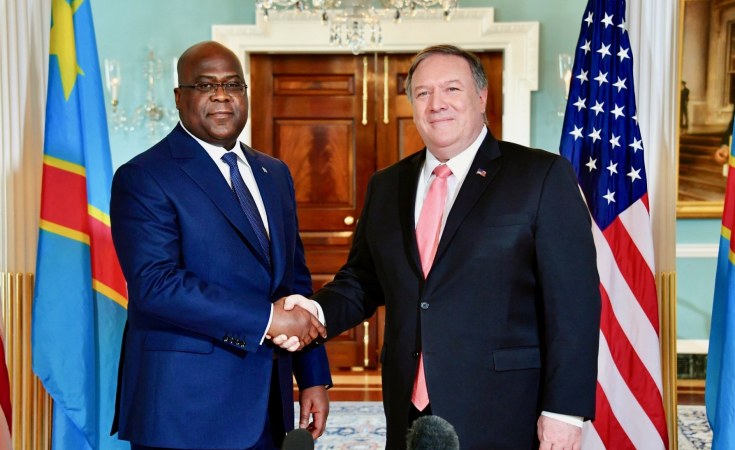 A new military agreement has underscored a budding friendship between the US and DR Congo, alongside speculation about the establishment of a US command center. But experts say it's too soon to draw conclusions.

For a long time, relations between the United States and the Democratic Republic of the Congo (DR Congo) were far from cordial. DR Congo's long-time ruler, Joseph Kabila, clung to power with increasing urgency in the last few years of his presidency, causing his country to slide even deeper into diplomatic isolation.

But ever since Felix Tshisekedi took office in 2019, relations with the US are warming up. A new high point towards reconciliation took place in early August when both countries agreed to pursue military cooperation. Among a list of other agreements, Congolese officers are set to be trained in the US in the future.

For Stephanie Wolters, an expert on DR Congo at the South African Institute of International Affairs (SAIIA) in Johannesburg, the agreement underscores the growing importance for the Tshisekedi government to maintain ties with the US.

"It's a political relationship that they have," she told DW. "Since Tshisekedi became president in 2019, the US has been the most actively supportive international player in the DR Congo. We have seen a number of high-level officials going to Kinshasa over the last year and a half and the US ambassador is very active and visible."

This friendship has gone so far as Tshisekedi endorsing the so-called Trump peace plan -- a proposal from US President Donald Trump to resolve the Israeli-Palestinian conflict in the Middle East. But how does the Congolese president benefit in this duo?

At first glance, the new military cooperation agreement should be considered a minor step forward, says Wolters. Nevertheless, Tshisekedi sees the agreement as a positive sign for future relations. In the past, the Americans found it difficult to work with the Congolese.

"Many [Congolese] generals and officers have committed human rights violations and human right violations are also regularly committed by the rank and file," Wolters explains. "But the bottom line is, the Americans are huge supporters of Tshisekedi. They've been encouraging him to go after some of the more corrupt in the government and in the military and there is very visible and public support for this."

Speculation over US headquarters in Africa

An even more far-reaching alliance with the US is also currently being discussed in DR Congo. The military agreement between the two countries has led to speculation about a possible relocation of the headquarters of the United States Africa Command (AFRICOM). The US Department of Defense recently announced its intention to move AFRICOM headquarters from its previous location in Stuttgart, Germany, as part of the reorganization of the US armed forces in Europe.

Congolese MP Mohamed Bule, the former deputy defense minister and a retired army general, suspects Washington may rethink the AFRICOM headquarters issue based on the recent military agreement with DR Congo, referring to rumors that the DR Condo has already been mentioned as a possible location for the new headquarters back in 2008.

"It was the US that asked for AFRICOM to be set up in our country," he told DW. "So it depends on them to use this resumption of military cooperation to revive the issue."

"Due to the past, DR Congo is allergic to Western units in the country," he told DW. "Over the past century, various Western units and troops have cavorted [through the country], so they don't want any foreign soldiers there and even regularly ask that UN missions be scaled down."

From AFRICOM's point of view, setting up headquarters in DR Congo would not have any advantages, says Gollwitzer. A location in Africa may be out of the question for the US. According to statements from the US Department of Defense to AFRICOM employees in Stuttgart, a suitable location is currently being sought in Europe or the United States.

For Gollwitzer, the military agreement between the Trump and Tshisekedi administrations is another sign of change in Congolese-American relations, which began shortly after Tshisekedi took office in 2019.

"[Tshisekedi's] first trip after his election was to the US," explains Gollwitzer. Domestically, Tshisekedi is in a weak position: His party is in the minority in both the parliament and the senate and most of the general staff are still loyal to Kabila who, after 18 years as president, is still able to pull a few strings. But with the support of the US, Tshisekedi could strengthen his position abroad, as well as in his own country's military.

AU Has 'Serious Doubts' About DR Congo Election Results
Tagged:
Copyright © 2020 Deutsche Welle. All rights reserved. Distributed by AllAfrica Global Media (allAfrica.com). To contact the copyright holder directly for corrections — or for permission to republish or make other authorized use of this material, click here.

How Criminals Move Their Money Around the World
Energy