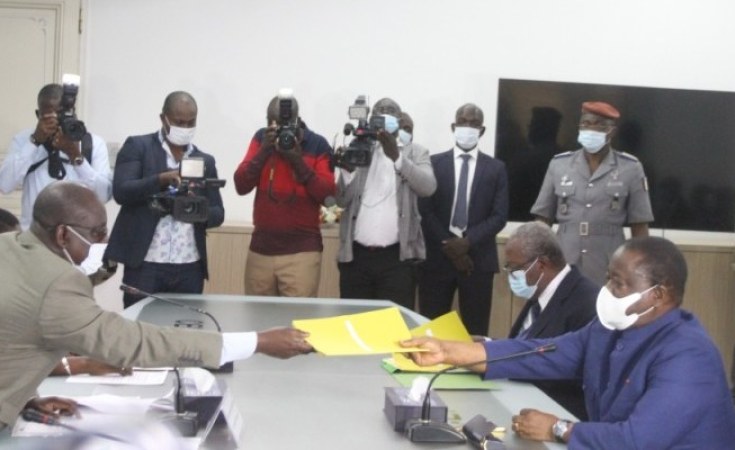 AFRICA'S PROBLEMS HAVE often derived from two consequential narratives: Rulers hanging on to power beyond their term of office or changing the rules to keep them in power and army takeovers and rebel rebellions that have led to years of turmoil and brutal dictatorships.

WHEN THE Military officers recently overthrew Mali's president Ibrahim Boubacar Keita in a coup d'etat, international stakeholders including the United Nations, the Economic Community of West African States (ECOWAS), the United States of America and others, immediately condemned the coup and press the coup leaders to commit to restoring stability and oversee a transition to elections within a "reasonable" period.

PRESIDENT KEITA resigned and dissolved parliament, hours after the coup leaders detained him at gunpoint, plunging a country already facing an armed movement against it as well as mass opposition protests deeper into crisis.

EFFORTS TO REACH some type of agreement have so far failed to materialize after talks between an ECOWAS delegation and the military officers who overthrew Keita ended without a deal on how the country should return to civilian rule following last week's coup.

TO DATE, no timeline has been established for elections to return the country to civilian rule. The coup leaders previously said they would stage elections "within a reasonable time".

IN CONTRAST, the recent decision by Ivorian President Alassane Ouattara to run for a third term in October's general election, despite protesters and opposition claims has generated very limited reactions, especially from ECOWAS.

THE ONLY WORD from ECOWAS so far has been an expression of concern about the escalating violence as elections near while urging all political actors to turn to dialogue.

ALL THIS AS demonstrators in recent days have alleged Ouattara's running for the presidency is unconstitutional because he wants to remain in office for a third term. The president still needs the approval of the constitutional court.

AS WE HAVE STATED before, Mr. Outtara's decision is a recipe for disaster and trouble, not just of the Ivory Coast but for the subregion as well.

THIS WEEK, the United States embassy in Abidjan issued a statement stating that while it remains committed to supporting free, transparent, and inclusive elections in Côte d'Ivoire, the historic elections upcoming are opportunities for Côte d'Ivoire to continue on its peaceful path towards prosperity. "It is up to the Ivoirian people to decide the future and leadership of their country. The Constitutional Council of Côte d'Ivoire will decide the so-called "third term" issue. We continue to believe that regular, democratic transitions of power yield more accountability, stronger institutions, and more constructive citizen participation in the political process."

AND SO, DO WE. ECOWAS should not sit by and allow the situation in the Ivory Coast to get out of hand. Just as they have come down hard on the coup leaders in Mali, they owe it to the stability in the subregion to do the same in the Ivory Coast.

THE DECISION to selectively single out one group in a West African country and allow Outtara to have his way unabated, speaks volumes for a body established to promote cooperation and integration, leading to the establishment of an economic union in West Africa in order to raise the living standards of its peoples, and to maintain and enhance economic stability, foster relations among Member States.

IF WEST AFRICA is to remain stable, the regional body must take the lead in approaching each case impartially - and with an even hand and an objective mind.

IF THE ARMY is wrong for staging a coup and stalling on committing to restoring constitutional order, then Outtara is just as wrong for trying to prolong his stay in power through an ill-advised process aimed at enforcing a third term on the people of the Ivory Coast.

ECOWAS CANNOT project itself as an impartial monitor while at the same time being seen as playing a double standard to protect one of its own. What's good for the goose is just as good for the gander which is why it is important for the regional body to equally condemn Ouattara for trying to hang on to power in the same vein and fashion as it is condemning the coup in Mali.

IT IS ABOUT TIME that African leaders begin erasing the notion from their heads that they are the only ones ordained to lead or rule; that without them, countries will crumble. ECOWAS's failure to condemn what is unfolding in the Ivory Coast in the same way it has condemn what is going on in Mali is not a god sign and is simply contributing to instability should anything worse happen as a result of Mr. Outtara's actions.

FORMER PRESIDENT BARACK OBAMA was right during a visit to Ethiopia last year when he threw jabs at the power structures of Africa by calling for long-entrenched leaders to step down, using off-the-cuff remarks about his own political standing and his stature as the first American president with African roots to try to reshape the continent's politics. "I actually think I'm a pretty good president," Mr. Obama told diplomats from across Africa, departing from his prepared text to present himself as a model for giving up power when term limits are reached. "I think if I ran, I could win. There's a lot that I'd like to do to keep America moving. But the law is the law, and no person is above the law, not even the president."

ANY SOUND regional body ascribing to the principles of good governance as ECOWAS aspires, would think and project the same while condemning in no small way, attempts by anyone to usurp the constitution for their own selfish gains.