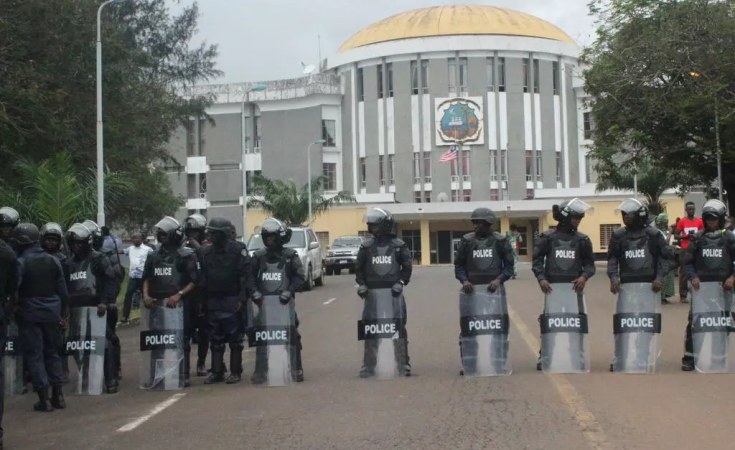 Darlington Porkpa/RFI
Liberian police block government buildings from the anti-rape protesters on the streets of Monrovia who want to give their petition to President George Weah.
Radio France Internationale
By Darlington Porkpa

Monrovia — Thousands of anti-rape campaigners have been tear-gassed by police in the Liberian capital Monrovia on a third day of protests. The demonstrators were attempting to gather in front of the Liberian foreign ministry to present their petition calling on the government to declare rape a national emergency.

The protest, under the banner "March for Justice" was organised after a 19-year-old boy in rural Liberia allegedly used a razor blade to mutilate the genitals of a 3-year-old girl, which he reportedly thought would enable him to rape her more easily.

Organisers said some 5,000 people have turned out for the protests. People wore black as a sign of solidarity for victims and survivors of rape, holding signs that said "Justice for all Liberian girls and women", "Stop Rape" and "She could be your daughter".

They marched on Thursday from the Sinkor neighbourhood to Capital Hill, the seat of the Liberian government. They gathered in front of the foreign ministry, where President George Weah's office is housed, until they were tear-gassed.

Organisers told RFI that they will remain until Weah receives their petition.

Some of marchers were prevented from going to the foreign ministry by the police, and gathered in a field across from former Liberian president Ellen Johnson-Sirleaf's home. She saw the women outside, and went to meet them.

"Given the cases that have recently come out where young babies, three months old, ten years old, are violated... the women felt they had to act," she said, commending them for their peaceful protest.

"Today, they gathered in front of my yard. I could not stay in my house and see all those women out there demonstrating for something that is good for the country and not go there to show solidarity with them."

The march was organised country-wide, including in the rural areas. Several counties, including Bong County in central Liberia, Nimba County, Grand Bassa County and Maryland County held their own marches to protest the rise of rape cases.

"Enough is enough. We are in a sexual and gender-based violence pandemic in the midst of the Covid-19 pandemic," says Naomi Tulay-Solanke, founder and executive director of Community Healthcare in Monrovia.

In the last few months, as confirmed cases of the coronavirus continue to increase in Liberia, the country has registered a surge in cases of sexual and domestic violence, which has pushed people to protest, says Tulay-Solanke.

The protesters are calling for the government to take this issue seriously, especially after the Ministry of Justice Bureau of Correction reported that 900 people are behind bars in connection to allegations of rape.

The rape campaigners say in a seven-month period, from January to July this year, 960 rape cases were reported across the country, not including those that occurred in hard-to reach communities.

"The numbers are higher than what we had last year," says Liberia Gender, Children and Social Protection Minister Williametta E. Saydee-Tarr.

The groups' petition was presented to the legislature by 14-year-old Irene Smith, who called for the courts that handle rape cases to be decentralised, as well as increase funding for the courts.

"Strengthen the judicial system for speedy trials of rape and other sexual and gender-based violence (SGBV) cases," says Smith. "Hire more judges to hear and determine rape and SGBV cases in a speedy and expeditious manner."

The protesters also called on the government to ensure there are functional safe houses to accommodate survivors of rape and other SGBV cases across the country.

Some, including Saydee-Tarr, have advocated stricter punishment such as chemical castration for those sentenced for crimes of rape.

"We will keep pushing that. It's something the Legislature can look into. We can pass that into law. I think I will help reduce the cases," she says.

Darlington Porkpa/RFI
Demonstrators during a three-day protest in Monrovia, Liberia took to the streets after a jump in the number of rape cases in the country.

A number of others are also on board: former foreign minister Olubanke King Akerele and Mulbah Morlu, Chairman of George Weah's ruling Coalition for Democratic Change party. Both have proposed chemical castration for rapists.

Morlu says his party has zero tolerance for rape and will support the legislation of any move intended to end the culture of impunity for rapists.

The Association of Mayors and Local Government based in Monrovia, but with offices around the country, are also backing calls for capital punishment for convicted rapists.

"We have social media now, so cases are coming up unlike before when these cases were compromised in communities," she says.

The lasting effects of trauma

But while modern technology has helped in some instances, it has created additional obstacles, according to Mmonbeydo Nadine Joah, executive director and a legal counsel for the Women and Children organisation.

The prevalence of the internet and exposure to violent sex videos have added to the rise in cases, she maintains.

"Those who didn't fight in the war are still here," she said. "They suffered the effects of the war because those who committed sexual crimes then are explaining their stories to people, who then try to execute exactly what was done during the war," she said in a telephone interview with RFI.

She believes in a need for vigorous reforms in the justice system as well as specialised training for law enforcement officers investigating rape allegations and other gender-based violence.

For F. Philip L. Nushann jr, the head of the Lutheran Church in Liberia Trauma Healing and reconciliation program, a grassroots-based solution is key. It is time for the government partner with local communities to address the matter, he says.

He believes that using a broad-based approach aimed at educating people on the domestic violence law and the rape law will lead to fewer cases, as well as naming and shaming convicted rapists in order to address the issue.

"When somebody is raped, the trauma that person faces is untold," Nushann told RFI. "So any woman, any child that is raped will face physical and emotional pain, and it leads some of them wanting to commit suicide."

He expressed fear that the majority of girls who have been raped risk being not able to bear children in the future due to the severity of most of the cases.

The rise in the number of cases relates to customs and traditions where people normally see women as less important in society, he says.

The government has not received the protesters' petition. Some members of the Weah administration, like Deputy Information Minister Eugene Fahngon, who also joined the anti-rape march, said the government is worried about the number of rapes being reported.

He said the Weah-led government is the first to have enacted a domestic violence law to create a safe space for women and girls in the country.

"President George Weah has instructed the finance minister to procure two DNA machine to help prosecute rape cases. So I am here to support the protest and to be in solidarity with the victims of rape, that's why I am here," he said, dressed in black.

At the moment, the country do not have a single functional DNA machine to help in the prosecution of cases going to court.

"The more we keep people in prison for long time, the less likely we are to have a deterrent for others not to follow. So that is why we have an increase. What we need to do right now is to enforce the laws we have on the book and to expedite our cases more quickly and robustly then we done in the past," he said.

Liberians Stage Peaceful Mass Protest Against Rampancy of Rape With Impunity - Pres.weah Fails to Show Up to Receive Petition Statement