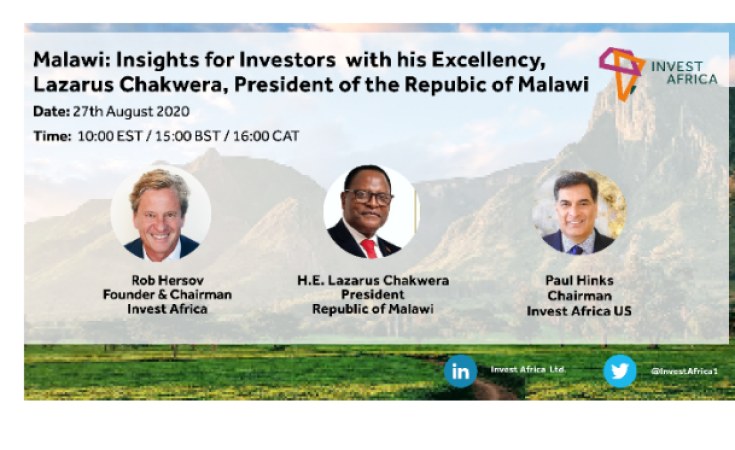 @InvestAfrica1
An Insight for Investors with H.E. Lazarus Chakwera, President of the Republic of Malawi
Nyasa Times (Leeds)
By Nyasa Times Reporter

President Lazarus Chakwera has told internationa investors that Malawi has begun a great journey from poverty to prosperity, saying the southern African nation is not a poor country but its endowed resources have been poorly managed and that he has a vision to change the fortunes for the better.

Speaking to investors through a live discussion on Thursday at a webinar organized by a London-based leading investment platform Invest Africa, Chakwera said to manage the resources well, he has declared "zero tolerance" against corruption and plunder of public resources.

Hosts for the webinar asked Chakwera: "Unfortunately Malawi has become a very poor country since the early 90s, making it a huge challenge for you to turn the economy around. What will you be doing to chart a new course for the country ? Our members want to help you by coming to Malawi to invest and build new businesses and to provide training and jobs. Unemployment must be a huge problem.

"It is no secret that corruption at all levels of society has been pervasive in Malawi for decades. Serious investors don't want to be exposed to officials who are seeking out bribes. We know it's not easy but are you going to be focusing on this ?"

In response, Chakwera said: "Actually the country itself is not poor at all. We are richly resourced, we have poorly managed these resources and consequently Malawians have become poor. There is no reason why we should be mirred in poverty at this stage."

Chakwera, who was head of the Malawi Assemblies of God Church before joining frontline politics in 2013, said if Malawi can get united "under a common vision, if this country can truely be served by leadership that wants to serve the people, nothing fails ."

The President , speaking eloquently, charged that he intends to build a new Malawi on the foundations of a democratic State powered by the Chakwera Super Hi 5 - his political mantra .

In his Hi5, Chakwera is committing prospering together, ending corruption, upholding the rule of law, servant leadership and uniting Malawi.

Chakwera said Malawi will develop and end poverty if the nation creates "an environment which everyone has an opportunity to create wealth and prosper while we declare war on corruption and theft of public funds, following the rule of law."

He added: "We call these the Chakwera-Super-Hi-5."

Chakwera, who teamed up with UTM Party president and the country's Vice-President Saulos Chilima as his running mate in the June 23 fresh presidential election, said: "If we would do this, we would have created an environment in which Malawi would no longer be a poor country and staying at the bottom of the ladder."

The President said to Invest Africa webinar monitored live by Nyasa Times: " We are pursing policies that would ensure investors can come in because there is rule of law, fight against corruption."

He continued: "This country is poised to become a rich nation and not a poor nation as it is being characterised.

"I have declared zero tolerance to corruption so we will fight to the end."

Chakwera, who won a historic victory over Peter Mutharika in June, urged investors to trust that he will deliver on his promises.

He said his administration is setting up systems and making sure they are functional to clear the rubble left by the previous regimes.

Since taking office, Chakwera, 65, has launched investigations into some of the deals agreed by the previous government, suspending contracts.

Chakwera won a decisive 59% of the vote, the first time an incumbent president in Africa was beaten by the opposition after a court-ordered rerun. Judges in February overturned the resultof the May 2019 election, won by Mutharika, citing evidence of irregularities.

He said the government wants to create an environment in which every institution of governance such as the Anti Corruption Bureau, the office of the Ombudsman, Director of Public Prosecuton and other law enforcing agencies are functioning freely and independently from political pressure.

A UK-based Foreign Direct Investment expert Chalo Mvula told Nyasa Times that Malawi has hit the jackpot in being given this opportunity where President Chakwera directly addressed investors.

Mvula says its not just availability of resources that attracts investors, as other conditions such as the country's economy, availability of labour, political climate and even infrastructure and technological development comes into play.

Another crucial point are the incentives that the government will put in place to attract those potential investors which Chakwera ably addressed.

"I would say at this stage the bargaining power is with Malawi, we have a new government ushered in at a back of a very promising manifesto, the President has always said he is geared to promote investments to enable the fulfilment of the one million jobs pledge , and a government that is tackling corruption head on, so really I see a great possibility of a Win-Win situation between the Malawi government and the investors" argued Mvula.

He said Malawi stands on the brink of being a new investment hub for Africa and the Invest in Africa initiative could be just the beginning of the influx of foreign investment.

In 2017, Invest Africa and the Business Council for Africa (BCA) announced a strategic partnership and advised their respective memberships of the intention to merge their operations. Malawian James Woods-Nkhutabasa has been serving as a Malawi Country Director and Advisor for the organisation since 2013 and is called upon for works regarding the continent.

Chakwera Faces Backlash For Hiring Tony Blair As Malawi Advisor
Tagged:
Copyright © 2020 Nyasa Times. All rights reserved. Distributed by AllAfrica Global Media (allAfrica.com). To contact the copyright holder directly for corrections — or for permission to republish or make other authorized use of this material, click here.