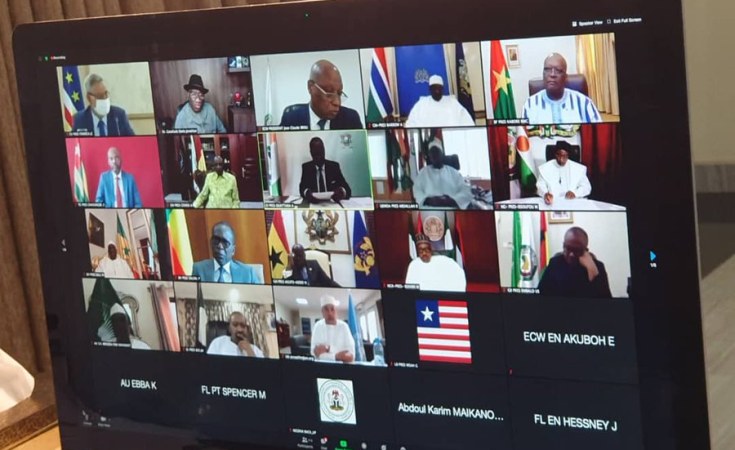 @GEJonathan
ECOWAS Heads of State and Governments in a virtual meeting called for a 12-month transition process to civilian rule in Mali.
Daily Trust (Abuja)
By Abiodun Alade

The protest coalition that campaigned against former Mali president Ibrahim Boubacar Keita has proposed that the military junta that ousted him organise a transition to civilian rule within 24 months, one of its leaders said Sunday.

Military rulers received representatives of the June 5 Movement at the Kati barracks near Bamako late Saturday, after announcing they would postpone a meeting with civic groups, political organisations and former rebels on the transfer of power due to "organisational reasons".

The protest movement has demanded that the military junta give it a role in the transition, in keeping with its role in spearheading Keita's ouster.

It has proposed "a transition of 18 to 24 months" with civilians heading a transitional presidency, government and assembly, one of the movement's leaders, Choguel Maiga, told AFP.

It also called for "a committee to monitor and supervise the transition which will be composed of a majority of members of the junta and the (June 5 Movement)," he said.

The August 18 coup has prompted the West African country's neighbours and ally France to call for a swift transfer of power, amid heightened worries over instability in a country already struggling with an Islamist insurgency, ethnic violence and economic malaise.

Mali's influential imam Mahmoud Dicko, a key player in the mass opposition protests that led to Keita's ouster, warned Friday that the military rulers did not have "carte blanche".

Dicko's spokesman Issa Kaou Djim later expanded on this, saying the imam "said the people have started to doubt" the junta.

Within hours of taking control, the junta pledged to enact a political transition and stage elections within a "reasonable time".

This was rejected by the 15-nation Economic Community of West African States, which has demanded an immediate civilian transition and elections within 12 months