Africa: Chadwick Boseman - in Celebration of a Life Well Lived 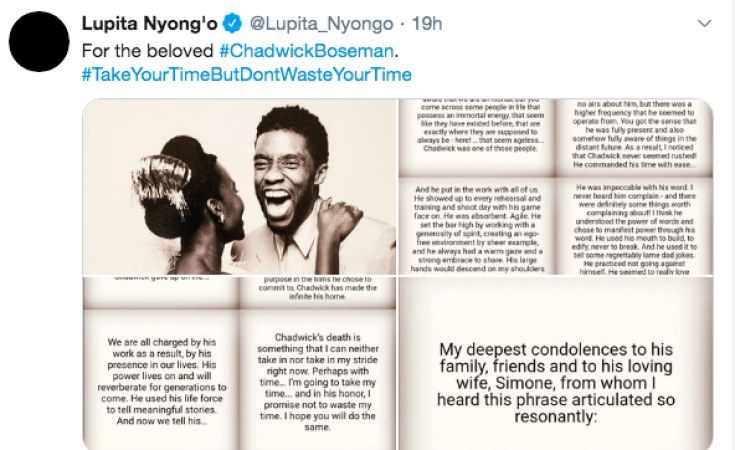 When posterity gets to write the history of Black icons, then Chadwick Boseman's name will forever be permanently etched in the top echelons of Black people's hall of fame folklore.

I woke up to the sad news of his passing on in the early hours of Saturday morning 29th August 2020. For one so unassuming, none would have ever known Boseman was privately battling colon cancer for four years, since 2016. Yet in recent months, I saw pictures of him visiting young children with cancer at St Jude's Research Hospital in Tennessee where he distributed toys, joy, courage and inspiration, yet he never gave anything away, as he constantly flashed his trademark Wakanda grin and wide smile, accentuated by the dazzling white teeth which melted hearts of global fans of Black Panther.

At 43, it is a life cut tragically short, yet we have to celebrate Boseman's remarkable filmography and his acting prowess. He certainly cemented his place and legacy amongst Black Pride, Black History, Black Culture and Black Consciousness inter-alia. Who can forget his mesmerising performance as fictional T'Challa, charismatic leader of utopian nation of Wakanda in Marvel films which earned a legion of global fans?

My 12-year-old son, Ethyn texted me visibly dejected at learning of the passing of an icon, he so venerated and idolised;

"That's so unfortunate Dad, I was looking forward to Black Panther 2. I couldn't even tell he had cancer, yet he still made films for us, that's sad."

Such apt, poignant remarks from a 12-year old lad in themselves microcosmic of a global consciousness and loss serves to underscore Boseman's cultural capital and lofty stature with all and sundry. As testament to his enduring appeal to youngsters, there's a beautiful poem written, so soon after news of his death filtered; reflecting his role in inspiring young black children. I quote verbatim, the opening lines of the poem;

How do we say thank you?

For the Kings and Queens, you created

The superheroes you inspired

The Black Children who will dream bigger

As the poem attests; Boseman was a hero to fans, young and old who needed to see their own potential represented on screen. This is more in tandem with Erykah Badu's observation; "we as Black people have to tell our own stories. We have to document our History. When we allow someone else to document our History, the History becomes twisted and we get written out." I find a lasting resonance with this statement, even though Black Panther was fictional but there is a certain consolation in seeing one of our own on screen; and that was what Boseman represented. Black Panther was eulogised as a cultural milestone for having a predominantly black cast.

Boseman contributed immensely to Black Pride through his powerful, dignified and humanising portrayals of African American leaders such as baseball great Jackie Robinson in 42 (2013), future Supreme Court Justice Thurgold Marshall in the eponymous 2017 legal drama, and soul star James Brown in the musical biography Get on Up (2014), among other stellar performances. It is testament to his remarkable fortitude and resilience Boseman continued working despite his diagnosis; including his work on Black Panther shot in 2017; a befitting acknowledgment made earlier by my 12-year-old son Ethyn, himself an ardent Boseman fan.

In a career spanning over two decades, Boseman rose through the ranks working himself up the proverbial rungs starring in shows such as; Law & Order (2004), CSI: New York (2006) and Lincoln Heights (2008-9) among others. But it was in 42, a sports film where he made his breakthrough reprising his role as Robinson the American professional baseball player. That breakthrough performance catapulted him to instant stardom; replicated in subsequent productions such as Get on Up and Draft Day (2014). 2014 marked a significant milestone which saw his transformation from superstar to superhero. Marvel Studios unveiled him as the persona who would front Black Panther, the historic first Black superhero on the big screen. From then on, Boseman's superhero legend status was sealed even in real life where the film went on to gross herculean success snapping up galore awards and breaking cinematic historical boundaries. It became the first superhero film nominated for best picture at the Oscars.

Black Panther, a film which heralded the Afro futurist Wakanda nation and establishing T'Challa as its new ruler following the assassination of his father. This was more than a film or merely another gratuitous popular culture spectacle. It was a cultural magna carta moment, not lost on the fans, some of whom went to cinemas in traditional African clothing to celebrate its depiction of black heritage and the fictional kingdom of Wakanda. In fact Director Ryan Coogler's Black Panther film was charting new territory in cinematic history. This was huge and a seminal moment in the making - a breakthrough in media representations for Black audiences who hitherto had been subjected to tokenism representations in the Sci-Fi genre. The validation for this film's success is all too palpable in the array of awards it bagged, not least being the first superhero film to earn a Best Picture nomination at the Academy Awards. Unsurprisingly, its success also had lucrative returns for the Marvel cinematic franchise whose global audience share skyrocketed. The film destroyed racist stereotypes not least that Hollywood couldn't make big money from films dominated by black talent. "Rather than dodge complicated themes about race and identity, the film grapples head on with the issues affecting modern day black life," said journalist Jamil Smith in Time magazine.

The New York Times dubbed the film a "a defining moment for black America." Two years on, it says it remains a "cultural touchstone - the first major superhero movie with an African protagonist; the first to star a majority black cast; and in Ryan Coogler, the first to employ a black writer and director." As well as Boseman's powerhouse performance, it showcased the likes of exciting young actors such as Lupita Nyong'o, Danai Gurira, Daniel Kaluuya and Letitia Wright among others.

Through his sterling portrayal of T'Challa, Boseman is credited as an epitome of Black excellence, strength, intelligence, compassion and respect. As Breznican and Busis (2020) observed; "the joy of the Wakanda story was that it was a nation that had never been conquered; it was able to harness its people's ingenuity and its cache of the cosmic element Vibranium to create a peaceful, futuristic society untouched by colonialism or oppression. It was a better world, led by powerful, noble-hearted rulers. T'Challa was its embodiment." Our post-independence African leaders have a lot to learn from this Wakanda self-sufficiency model and use of their resources unlike what currently obtains where a nation's resources are at the behest of personal aggrandisement of rulers and their clansmen.

T'Challa's journey continued in subsequent films; he lived to fight another day in Avengers: Infinity War (2018), in which Wakanda was the central background in the struggle to protect the universe, and Avengers: Endgame(2019), in which T'Challa returned triumphantly to defeat the all powerful warlord who had threatened all existence.

Sadly, for many, not least my son Ethyn, a Boseman super-fan; it must have eluded them Boseman would return for Black Panther 2 given the tragic ending of Infinity War film in which T'Challa was amongst some of the characters who faded away into oblivion. There is however the stoic optimism endowed in lifelong faithfuls who in the world of make believe popular culture anything is pretty much possible and perhaps, but just, they had hoped the fading of T'Challa in the tragic ending of Infinity War would be reversed; - but then the events of 29th of August have robbed us and them the chance to witness our superhero Boseman reprising his awe inspiring role onscreen again. The dilemma for the future remains on how to proceed with Black Panther 2, without its charismatic lead. Calling a halt to the series with so much money at stake appears a long shot; however, things pan out Marvel studios will have a real decision to make.

As one fellow fan of Chadwick aptly put it; Boseman was a beacon of light to people across the globe. His role in Black Panther was ground-breaking and iconic. For many black children, he was the first major superhero they could identify with. Rest in power to a genuine, virtuous hero. Wakanda forever and always.

I couldn't agree with you more mate, I feel the numbing, gnawing pain at the untimely loss of a life so young, but snuffed out in it's prime, one who had so much boundless potential, kindness and compassion to give to humanity. Thank you for rising, for lifting, for elevating Black Pride. Rest in Peace my brother. Till We Meet Again. Wakanda forever.

Andrew Chatora teaches English, Media and Sociology at The Bicester School in Oxfordshire, England, where he manages The Media Department. He writes here in his personal capacity.

Previous Story
Tagged:
Copyright © 2020 This is Africa. All rights reserved. Distributed by AllAfrica Global Media (allAfrica.com). To contact the copyright holder directly for corrections — or for permission to republish or make other authorized use of this material, click here.