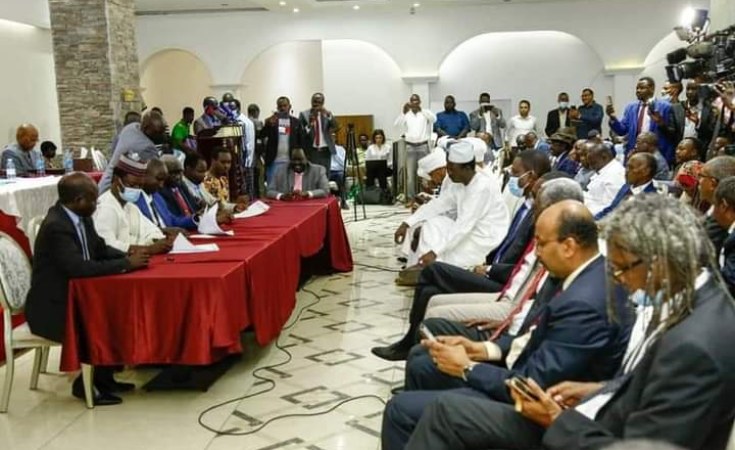 @HonTutQalwak
The delegation of the transitional government of Sudan and the armed movements in Darfur sign seven protocols to end the fighting in the region.
Deutsche Welle (Bonn)

Sudan's transitional government has signed a long-awaited peace agreement with a coalition of armed groups. The deal raises hopes of an end to decadeslong civil wars -- but not all rebel groups are on board.

Officials from Sudan's transitional government on Monday signed a peace agreement with the Sudan Revolutionary Front (SRF), a coalition of several armed groups, after nine months of tough negotiations.

The deal with the SRF was signed by Sudanese Prime Minister Abdalla Hamdok and the chairman of the Transitional Sovereignty Council, Abdel Fattah al-Burhan, during a televised ceremony in the South Sudanese capital, Juba. The signing took place under the auspices of South Sudan's president, Salva Kiir, who played a large role in mediating the agreement.

'The start of peace-building'

Among other things, the provinces of Blue Nile, South Kordofan and West Kordofan will be granteed self-rule, according to a draft of the agreement seen by The Associated Press.

After the signing, Hamdok called the deal a "great work" and "the start of peace-building."

An SRF representative said the coalition hoped the deal would end the suffering of Sudan's people.

In a joint statement, Norway, Britain and the US hailed the agreement as an "an important step in restoring security, dignity and development to the population of Sudan's conflict-affected and marginalized areas."

Sudan's transitional government, which came to power after President Omar al-Bashir was ousted in April 2019 by the military amid an uprising, has made ending rebellions in the country's provinces a key goal. Among other things, it aims to use cuts in current military spending to boost the country's ailing economy.

Sudan's civil conflicts, which have wracked the country since 2003, when unrest broke out in the Darfur region, have killed some 300,000 people and displaced millions, according to the United Nations.

Sudan to Cooperate With Hague Court on Indicted Citizens
Tagged:
Copyright © 2020 Deutsche Welle. All rights reserved. Distributed by AllAfrica Global Media (allAfrica.com). To contact the copyright holder directly for corrections — or for permission to republish or make other authorized use of this material, click here.