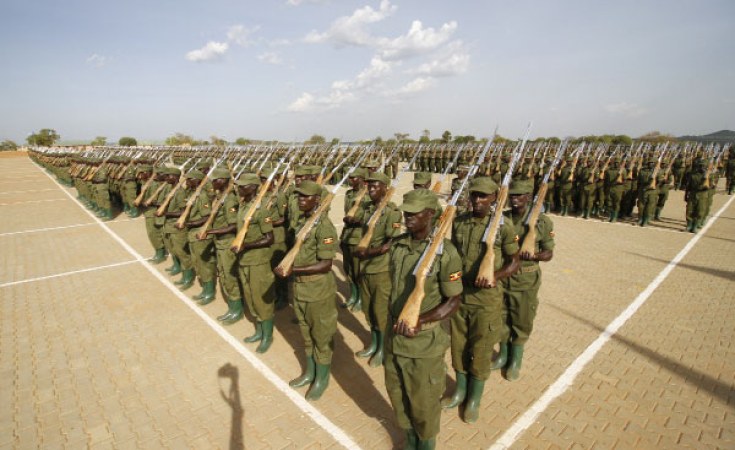 In Karamoja, local defence units have been deployed to stop castle rustling. But memories of past violence at the paramilitaries' hands still loom large.

In 2011, a hard-fought military disarmament process brought a fragile calm to the Karamoja region of northeastern Uganda. Decades of livestock raids between local herders finally came to an end.

Less than ten years later, however, this uneasy peace is threatening to come apart. Armed attacks by raiders from Kenya have prompted some groups to rearm, leading to a rise in tensions.

In response, the Ugandan government recently deployed 3,000 paramilitary troops across Karamoja to protect against cattle rustling. These fighters are part of so-called Local Defence Units (LDUs) and provide a kind of grassroots national security infrastructure. The regiments are made up of local volunteers who are provided 16 weeks military training and operate under the watchful eye of the Ugandan army. LDUs primarily enforce the law in their own communities but may also cooperate with colleagues in neighbouring regions or even be redeployed to support the formal Ugandan army.

These paramilitaries have helped provide security in some instances, but they also have faced numerous allegations of indiscipline and brutality, most recently in their enforcement of Uganda's COVID-19 restrictions. In Karamoja, their redeployment risks reigniting intercommunal tensions.

In this region, there are some deep interethnic rifts, including between Ethur farmers and Jie pastoralists. For centuries, these two groups considered themselves "one people" and shared close social, cultural and economic ties. But colonial rule and divisive state policies changed this. Recently, migratory Jie herdsmen and Ethur farmers have clashed over access to land. This has occasionally led to violence - some of it at the hands of LDUs. As recently as April 2019, Ethur paramilitaries gunned down three Jie herders - one of them a ten-year-old boy - as they tended to their cattle around the village of Otumpili.

These dynamics have raised concerns about the mass deployment of LDUs to Karamoja. Rather than bringing security, this move could bring its opposite.

Many Ethur men joined LDUs in the decades following the collapse of the Idi Amin regime in 1979. In this period, Jie raiders regularly plundered Ethur communities. These attacks were typically committed by small groups of opportunistic young men operating independently of their elders and spiritual leaders. Nevertheless, thousands of Ethur were displaced and anti-Jie sentiment spread throughout Abim district where the Ethur community is mostly located.

As a former Ethur member of an LDU recalled: "The people in the community never had guns, but the [Jie] warriors had guns, so that made me decide to join the paramilitaries to acquire guns to fight back."

In 2004, relations reached a new low. The Ugandan army - known as the Uganda Peoples' Defence Force (UPDF) - was working to disarm the Jie and other pastoralists in Karamoja. To support their efforts, they deployed some Ethur LDUs from Abim district to Kotido district, where many Jie were refusing to surrender their weapons. Here, long-standing animosities came to the fore.

In one particularly gruesome incident in October 2006, Ethur paramilitaries took part in the killing of Jie civilians in the parish of Lopuyo when a routine cordon-and-search operation went awry. Some LDU personnel there at the time recall being ordered to fire on fleeing civilians and claim that UPDF troops shot at people seeking refuge inside a building. Human Rights Watch estimated that 48 Jie civilians were killed in the attack and that at least 1,133 people were left homeless. After the incident, one Ethur LDU - known as the Yankee Battalion - was reportedly disbanded over the atrocities its troops were alleged to have committed.

The spectre of this violence continues to loom large in Jie communities. Some Jie men have also joined LDUs, but relations with Ethur colleagues are poor. As one Ethur fighter said: "They have never forgotten. For example, when you're on a drinking spree, even with your colleagues while in uniform... they will mention one of your relatives whom they killed... There's no trust between us and the other LDUs there."

Many Ethur LDUs similarly continue to hold negative stereotypes of Jie herders. For instance, one paramilitary suggested that all Jie should be barred from Abim district, "because during the dry seasons when they come, when they are going back, they always steal the animals and go along with them."

These sentiments are not lost on a Jie kraal leader who goes by the pseudonym Lokol. He said that LDUs in Abim treat herders with extreme prejudice during their dry season migrations. In recent years, local authorities - backed up by local paramilitaries - have placed harsh restrictions on Jie herdsmen searching for pasture. But their actions can go further than just preventing herders access.

"Sometimes we find that these [paramilitaries], when we take our animals out for grazing, go to our empty kraals... and they burn them as a way of intimidating the Jie so that the Jie go back to [Kotido]," said Lokol. "Sometimes, when they find that the Jie have taken their animals for grazing, they can begin shooting at people. Then, when people run away, they take all the animals back to the barracks of the LDUs."

In the wake of such incidents, Jie herdsmen are increasingly considering rearming. "If we keep coming back from Abim after having lost animals and after our shepherds are wounded or killed, we will have to kill [the paramilitaries] in order to get the guns [to defend ourselves]," suggested Lokol.

Local politics have not helped to ease tensions in Karamoja. In fact, some politicians have found that exploiting memories of violence and employing the language of ethnic chauvinism can be an effective vote-winner.

One local politician in Abim district, for instance, clearly sided with one community. "The Ethur are very peaceful people," he said. "They can only stand to defend themselves... against the raiding activities of the Jie. All these accusations are just finding loopholes and chances for pointing fingers at the Ethur."

The government's policy of decentralisation, which has seen the number of administrative districts in the country triple since 1997, has also contributed to the politicisation of local rivalries. Many new districts - such as Abim in 2006 - have been created along ethnic lines. And some residents view LDUs as partisan defenders of their ethnic groups. As a local politician said of the paramilitary groups following the establishment of the district: "It's much better for people who are common in language... and cultural identity to defend their own territories, so the boundaries can be stronger than ever."

Rather than seeing the role of LDUs as enforcing the law impartially in a pluralistic state, many politicians see them as tools in intercommunal political struggles. This attitude is shared by many LDUs themselves. One Ethur paramilitary explained that he takes more pride in being a son of the soil of Abim district than a citizen of Uganda, "because it's here in [Abim] that my umbilical cord and placenta were cut and buried."

Karamoja faces an array of challenges in building a sustainable peace: the legacies of past conflict, climate change, political rivalries, and the threat of renewed violence. Local media have also recently reported that LDUs within pastoralist communities in Karamoja have been accused of hiring out their weapons to local raiders. Nonetheless, many local communities - from traditional councils of elders to civil society organisations - are working tirelessly to achieve this peace.

The Ugandan government must also find a way to balance the need for security with intercommunal peace and reconciliation. It has many tools it can utilise but the deployment of LDUs - which are products of the very historical, cultural and political milieu they are tasked with policing - is one that may do more harm than good.

As one Abim district politician advised: "We need to look at Uganda as a country, not just as a collection of tribes." And as one Jie peace activist warned: "Instead of sowing the seeds of reconciliation, unity and national interest, we are busy sowing the seeds of divisionism."

Sam Meyerson is currently pursuing a PhD in History at the University of Wisconsin-Madison. He has an MA in African History from Makerere University. His research focuses on the social and political histories of the pastoral peoples of northeast Africa.