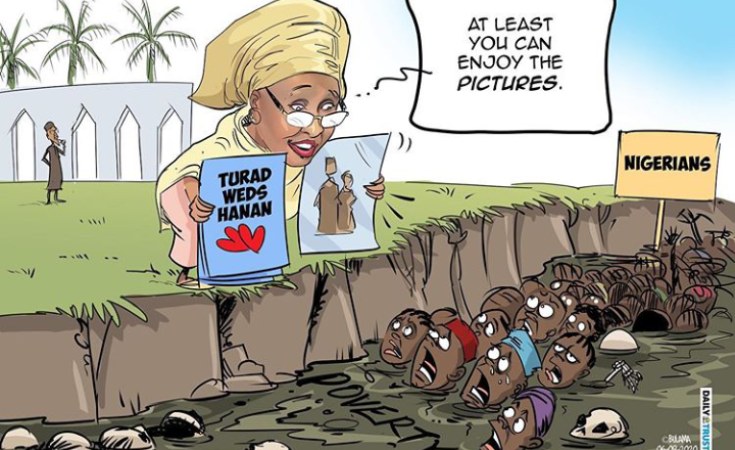 Nigeria's first lady, Aisha Buhari, has disapproved of the cartoon image of her showing Nigerians drowning in a river while she displayed the wedding invitation of her daughter and picture of the bride and groom.

The image by Daily Trust's cartoonist, Mustapha Bulama, shows Mrs Buhari saying "At least you can enjoy the pictures" while Nigerians drown in the river.

Hanan, one of the daughters of President Muhammadu Buhari and Turad, the son of a former lawmaker, Mohammed Sha'aban, tied the knot at the Aso Rock Villa on Friday after Juma'at Prayers.

Mrs Buhari shared photos of the couple on her official Instagram page @aishambuhari. She also expressed gratitude to those who attended the event and well-wishers for their goodwill messages.

"The cartoonist did not put Mrs Buhari in the right perspective with his drawing. Her daughter's wedding has nothing to do with the present hardship Nigerians are facing. And let me tell you that the first lady told all her aides not to make the wedding a big one because it was going to be a low key event.

"And again, the wedding pictures Aisha shared on her social media pages were pictures shot after the wedding parties. Also, the video that was going around the social media were videos that were shot in Zaria at the grooms' residence, not at the presidency," Mr Abdullahi said.

Umar Mohammed, a social media commentator, who resides in Kaduna, told PREMIUM TIMES that he saw nothing wrong with what the cartoonist did. "Aisha shared the pictures herself, it doesn't matter if she is using that to thank the people who attended the event. They were glamorous pictures.

"I believe Nigeria has never felt it bad like now. That you cannot even afford a bowl of maize not to talk of rice. And here you are sharing glamourous pictures of your daughter's wedding. And even videos were shared, people spraying money like water. That cartoonist did well.

Hauwa Hassan said, "Yes you have to wed when the time comes, but as the first lady, she should allow other people to do it. It is not easy again under there regime. More money to pay for the electricity that you will get only 4 hours a day if you are lucky, petrol is very high, no food to eat, everything biting hard on Nigerians. It is not necessary. Of course, Nigerians will be sad. I don't see anything wrong with Bulama's cartoon. He does that to everybody and people just laugh it out, why is she complaining besides it is true."

Nigeria’s First Lady Aisha Buhari Tells All In New Book
Tagged:
Copyright © 2020 Premium Times. All rights reserved. Distributed by AllAfrica Global Media (allAfrica.com). To contact the copyright holder directly for corrections — or for permission to republish or make other authorized use of this material, click here.