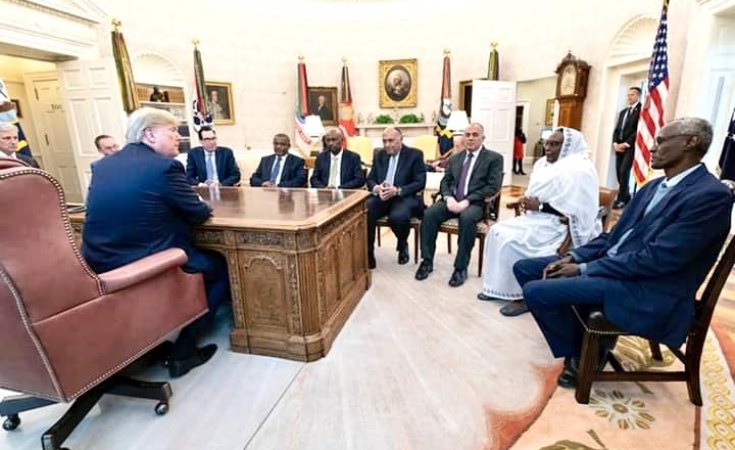 Ambassador Fitsum Arega / Twitter
President Trump meeting at the White House with foreign & water resources ministers from Egypt, Ethiopia and Sudan on the sideline of the Grand Ethiopian Renaissance Dam #GERD negotiations. A joint statement issued January 15 outlined progress and said talks would resume on January 28 " to finalize a comprehensive agreement on the filling and operation of the GERD."
Addis Fortune (Addis Ababa)
By Fasika Tadesse

Concerned by Ethiopia's unilateral decision to start filling the Grand Ethiopian Renaissance Dam (GERD) before an agreement, the United States has partially paused aid it has been giving to Ethiopia. The Trump administration has chopped close to 130 million dollars from funds appropriated to support Ethiopia's defence and counter-terrorism activities.

The United States, which jumped into the negotiation between Ethiopia, Sudan and Egypt as an observer but later upgraded its role to that of a mediator, has been pressuring Ethiopia to sign an agreement before starting to fill the Dam. However, Ethiopia, which strongly believes the Dam filling is part of the construction and cannot be up for negotiations, finalised the first water filling this July before the negotiations between the three countries ended.

The United States and the World Bank intervened in the negotiations, which involved water filling and operations of the Dam as well as drought mitigation, last November. The talks have moved back and forth between Washington, DC, and the capitals of the three African countries but have not proved conclusive.

Ethiopia has then lobbied for the talks to be turned over to the African Union to sort out the differences between the three countries. Trilateral negotiations over the Dam are now taking place under the mediation of the African Union.

The United States has been increasingly concerned by the lack of progress toward finalizing an agreement, according to a statement the United States Embassy in Addis Abeba sent to Fortune.

"The decision to temporarily pause certain assistance for Ethiopia reflects our concern about Ethiopia's unilateral decision to begin filling the Dam before an agreement and safety measures were in place," reads the statement from the Embassy.

However, the pause does not apply to already committed funds and humanitarian relief, according to the Embassy.

"The pause doesn't apply to humanitarian assistance or to funding that has already been committed for development programmes," reads the statement.

Over the past two decades, the United States has provided over 13 billion dollars in assistance to Ethiopia, four billion of which was given in the last five years.

The role of the United States in all of this is to pressure Ethiopia to take a position closer to the Egyptians, according to former United States Ambassador to Ethiopia, David Shinn.

"The American administration is using high-pressure tactics to try to get Ethiopia to change its position," he said. "My own view is that it isn't going to work."

However, the United States government claims that it is involved in the process of supporting a fair and equitable agreement that balances the interests of all three parties.

"An agreement would be transformational and improve the lives of over 250 million people by expanding economic opportunities through transboundary cooperation and regional integration," reads the statement from the Embassy.

It is more a question of power politics from the standpoint of the United States than it is the rightness and wrongness of what any country is doing in terms of releasing water from the reserves, according to Shinn.

Fitsum Arega, Ethiopian Ambassador to the United States, tweeted last week that the Embassy requested a clarification from the United States government and they were told that the aid cut is a "temporary pause."

"It's our Dam!" tweeted Fitsum, "We'll finish it together! With our effort, Ethiopia will shine."

The civil work on the Dam has reached 89pc completion, while the electromechanical works have reached 47pc. So far, 121.5 billion Br has been invested in the Dam and an additional 36.5 billion Br is required to finalise it. Starting in July, the first filling of 4.9 billion cubic metres of water was completed within a few weeks. The government plans to start the second filling in July 2021. The Dam, which has an installed capacity of 5,150MW of energy, is scheduled to be completed in 2023.

Dina Mufti, spokesperson at the Ministry of Foreign Affairs, did not respond to a phone call and text message from Fortunebefore the paper was sent to print.

Next Story
Tagged:
Copyright © 2020 Addis Fortune. All rights reserved. Distributed by AllAfrica Global Media (allAfrica.com). To contact the copyright holder directly for corrections — or for permission to republish or make other authorized use of this material, click here.