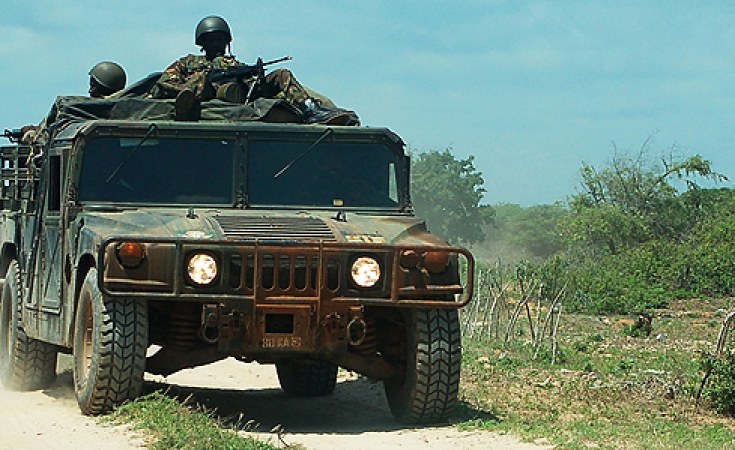 Business Daily
A Kenya Army jeep at the Ishakani border point in Kiunga as it heads for the battlefront in Somalia (file photo).
Capital FM (Nairobi)
By Davis Ayega

Nairobi — Kenya has urged East African member states to fulfill their obligations in the war against the proliferation and prevalence of illegal firearms in the region.

Interior Cabinet Secretary Fred Matiangi, who spoke during the launch of the African Union amnesty month on voluntary surrender of illicit firearm, underscored the need for member states to play their part and ensure the illicit guns trade is suppressed.

In particular, Matiangi emphasized the need for the signatory countries to the Nairobi Protocol for the Prevention, Control and Reduction of small arms and light weapons in the Great Lakes Region, the Horn of Africa and bordering states treaty to honor it.

"I speak strongly and candidly in the interest of my country. We've done a lot of PR around this issue for a very long time. We have paid a heavy price because of that big brother attitude. Everyone in the region must do their bit," he said.

The Nairobi Protocol was established in April 2004 to guide joint efforts for the prevention, control and reduction of Small Arms and Light Weapons (SALW) in the Great Lakes region and the Horn of Africa. Alongside Kenya, the agreement was signed by Uganda, Tanzania, Ethiopia, Burundi, Congo, Djibouti, Eritrea, Rwanda, Seychelles, and Sudan.

He noted that Kenya would no longer be persuaded to exercise lenience to foreigners caught trafficking firearms into and through the country.

"Our first responsibility is the safety of the Kenyan people. We have suffered as a result of small arms that come into our environment from some of our neighbouring countries. We will no longer be taken round in circles at the expense of the security and stability of our country," he said.

Matiangi at the same time urged those in possession of illegal firearms to take full advantage of the Africa Amnesty Month and surrender them before the government embarks on forceful disarmament.

"We'd like to go peacefully first and talk to our people about the dangers of harbouring these small arms. The untold pain and misery that we suffer in our country as a result of such weapons," he said, adding that those who surrender their arms to local police stations, local administration offices or religious leaders won't be charged.

Through the Firearms Licensing Board (FLB) and security agencies, the government has been undertaking regular mandatory vetting of all civilian firearms holders and subsequently confiscates and destroys weapons acquired illegally.

In November 2019, more than 8,000 firearms and 300,000 rounds of assorted ammunition were burnt, and many unregistered guns are progressively being seized, especially in banditry-prone counties.

The AU designated September of each year, from 2017 to 2020, as the month for the surrender and collection of illegally owned weapons in Africa in line with the implementation of the AU Master Roadmap for Practical Steps to Silence the Guns in Africa by year 2020.