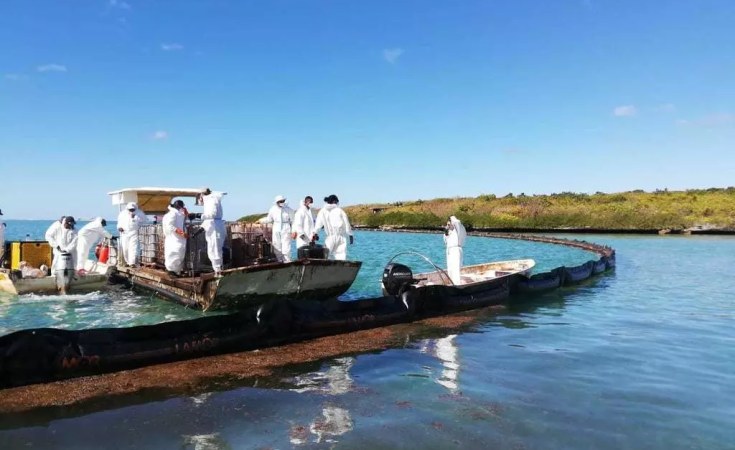 Government of Mauritius
Clean up operation off the coast of lle aux Aigrettes nature reserve. The authorities said that there is "little to no amount of oil" found trapped by the booms around the islet.
Deutsche Welle (Bonn)

The Japanese ship operator of the tanker that leaked over 1,000 tons of oil off the coast of Mauritius in July has pledged $9 million toward clean-up efforts. The oil spill has damaged mangroves and coral reefs.

The Japanese operator of a ship that leaked oil off the Mauritius coast pledged Friday to pay at least $9.4 million (€7.9 million) to help restore areas affected by the spill.

Mauritius previously asked Japan to provide at least $34 million to help deal with the ramifications of the oil spill.

Mitsui OSK Lines said in a statement that it planned to "contribute a total fund of about one billion Japanese yen ($9.4 million) over several years to support measures" to restore the marine environment.

The measures include running mangrove and coral protection projects and setting up and environmental recovery fund.

In addition, the shipping company plans to provide further support to local fishing and tourism industries, though details will be worked out later.

It waits to be seen whether the island nation of Mauritius considers the money adequate.

More than 1,000 tons of fuel are believed to have leaked from the ship in August after it ran aground off the coast of Mauritius.

The smaller section of the boat, which split in two, remains stuck near the coastline.

'The oil will spend decades on the shoreline'

The oil spill has been described by environmental experts as an unmitigated disaster for nature which will have wide-reaching and long-lasting repercussions.

"While the oil spill may spend weeks in the headlines, the oil is going to spend decades on the shoreline," Carroll Muffett, president of US-based nonprofit Center for International Environmental Law, told DW in August.

The accident is still under investigation by Mauritian authorities. It led to widespread protests in the archipelago nation.

Japan's Kyodo News said last month the ship's crew had steered it close to shore because they wanted to find a cellphone signal so they could contact family and ask about the coronavirus situation at home.

It cited an unnamed judicial source, who also said an alcohol-fueled birthday party had been held on board before the accident, though it was not clear if on-duty crew participated.