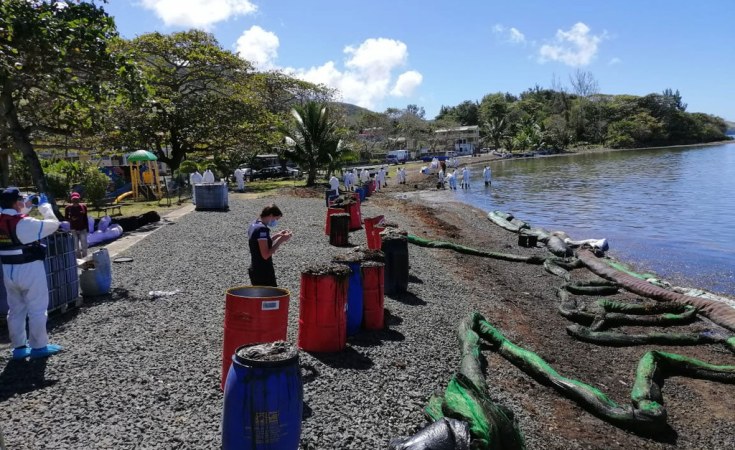 An oil spill off the coast of Mauritius in July is threating the island nation's efforts to attain a blue economy.

Blue economy is a term used to refer to the sustainable use of ocean resources for economic growth, improved livelihoods and jobs, while preserving the health of the ocean ecosystem.

The oil spill was caused by a Japanese-registered cargo vessel, the MV Wakashio that ran aground on July 25 after striking a coral reef, spilling more than 1,000 tonnes of engine oil into the pristine coastal waters of Mauritius.

The oil, which has coated beaches, coral reefs and mangroves with a poisonous sludge, has been described as the biggest ecological disaster ever to happen in the Indian Ocean.

"We are talking of decades to recover from this damage, and some of it may never recover, notes Mauritian oceanographer, Vassen Kauppaymuthoo.

Mauritius relies heavily on tourism, a sector already heavily impacted by the ongoing Covid-19 pandemic. The sector is the third pillar of the economy after manufacturing and agriculture. It is estimated that more than 100,000 domestic and international tourists annually visit the Blue Bay, where the spill occurred.

Scientists note among the factors that are causing great concern are the location of the spill, the type of oil used by the vessel, the time of year, as well as the nature of the beaches.

The oil spill occurred at the centre of a network of three internationally renowned and protected nature refuges containing some of the most endangered species on the planet. The Blue Bay Marine Park and the Pointe DEsny Mangrove Forests are designated as UNESCO Ramsar Protected Sites, as well as the nature preserve of Ile aux Aigrettes, that contain some of the rarest species in the country such as the countrys last remaining low lying ebony forests, which is not found on any other location on the island.

The oil spill is reported to have spread to other outlying islands which are protected nature reserves for endemic species. These habitats and populations have been carefully monitored for years and had been on the path to recovery prior to the oil spill.

The vessel was using Heavy Fuel Oil, a type of engine fuel commonly used in shipping. It is highly toxic in nature and requires special handling during clean-up operations. As a result, there are ongoing efforts to have it completely banned due to its risk to the environment.

This oil is already banned in Antarctica and the International Maritime Organization is finalizing plans to have it banned from the Arctic due to the fragile nature of the Arctic ecosystem and high exposure to ultraviolet light from the sun, which makes it more lethal.

Whales and dolphins rely on specific ocean habitats for breeding, and the oil spill occurred during the cooler Southern Hemisphere winter, a time when they migrate to the coast of Mauritius. At the beginning of September nearly 50 whales were found dead along the southeast coast of Mauritius, including pregnant females and juveniles.

Apart from the death of whales and dolphins, the spill has threatened the conservation of local seabirds and plant species in a nearby protected reserve.

In addition, the recovery of the oil can be challenging due to the sandy nature of the beaches and the root system of the mangroves which act as giant sponges to the toxic oil. Thus, while a lot of the oil may not be visible, its presence will be felt for many years to come.

It is for these reasons that the 40th SADC Summit held in August called upon SADC Member States and the international community to support Mauritius in containing the disaster.

This assistance will help the country in the clean-up effort and environmental, historical, cultural, social and economic assessment of damage, restoration of ecosystems and revival of fisheries.

Eight SADC Member States are coastal or oceanic and face a similar threat of oil spills which can impact on their efforts to attain a blue economy. These are Angola, Union of the Comoros, Madagascar, Mozambique, Namibia, Seychelles, South Africa and the United Republic of Tanzania.

The notion of a blue economy and the need to stimulate blue growth was first raised during the 2012 United Nations Conference on Sustainable Development aimed at capturing the potential for maritime-based activities and resources to stimulate economic growth and significantly contribute to sustainable development.

The blue economy concept essentially seeks to promote economic growth, social inclusion and the preservation or improvement of livelihoods while at the same time ensuring environmental sustainability of the oceans and coastal areas. It has diverse components, including established traditional ocean industries such as fisheries, tourism and maritime transport, but also new and emerging activities such as offshore renewable energy, aquaculture, seabed extractive industries and marine biotechnology and bio prospecting.

The SADC Regional Indicative Strategic Development Plan 2020-2030 and the Industrialisation Strategy and Roadmap 2015-2063 identify the blue economy as a potential area for sustainable growth in the region. sardc.net

Next Story
Tagged:
Copyright © 2020 Southern African News Features. All rights reserved. Distributed by AllAfrica Global Media (allAfrica.com). To contact the copyright holder directly for corrections — or for permission to republish or make other authorized use of this material, click here.