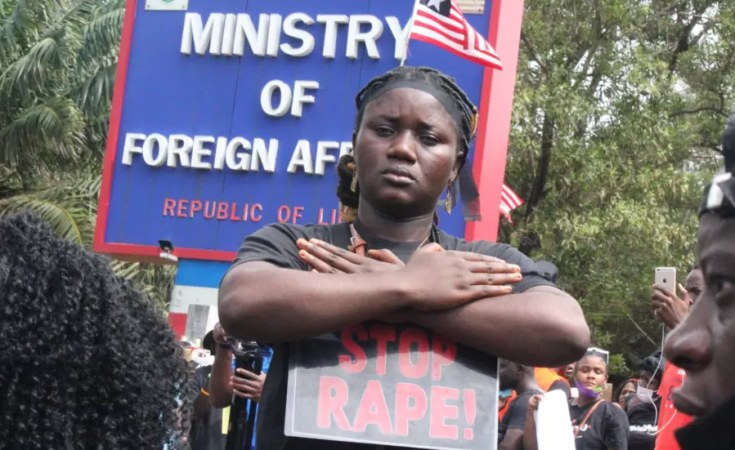 RFI/Darlington Porkpa
A Liberian woman protests outside President George Weah's office at the ministry of foreign affairs in Monrovia - demanding that Weah declare a national emergency for rape - on July 27, 2020.
Radio France Internationale
By Darlington Porkpa in Monrovia

Liberia's President George Weah has declared rape a national emergency after pressure from activists who are calling for better laws and more support to protect girls and women. The move will see 1.7 million euros allotted to the fight to stop gender and sexual violence.

Under the national rape emergency, Weah announced several measures, including the appointment of a special prosecutor for rape and the establishment of a National Sex Offender Registry and a National Security Taskforce on sexual and gender-based violence (SGBV), among others.

"We are witnessing an epidemic of rape within the Covid-19 pandemic, affecting mostly children and young girls across the country," Weah said at a national anti-rape conference earlier this month.

According to feminist activists, over 900 cases of rape have been perpetrated against women and girls including acts of sodomy targeting under-aged males since the coronavirus hit.

The presidential declaration comes two days after an anti-rape and sexual and gender-based violence conference in the capital Monrovia, aimed at highlighting the National Roadmap on rape and SGBV produced by the Inter-ministerial taskforce Weah recently set up.

The president insisted his administration will spare no effort in ensuring that sexual violence is curtailed. Additional measures, such as an executive order to protect the vulnerable and to ban harmful traditional practices such as Female Genital Mutilation, will also be introduced shortly, he said.

"We are now going to monitor how effective the government is in implementing the SGBV roadmap," Titus B. Pakalah, March for Justice director and lead campaigner told RFI.

The fight against sexual and gender-based violence starts with recognizing it is a threat to our collective humanity.

I commend the government of Liberia for declaring rape as a National Emergency. This national strategy to combat rape must be inclusive of all and everyone.

Activists are pushing the Liberian legislature to amend the rape law to ensure a harsher punishment for convicted rapists.

Rape is currently a non-bailable offence and perpetrators have no access to parole while serving their prison term.

However, Nimba County lawmaker Samuel G. Kogar says the current law, a martial law, needs to be amended because people are taking advantage of it.

"As soon as you are accused of being a rapist, it's non-bailable. The law is dangerous," he told RFI, saying that it allowed people to falsely accuse others, some of whom have been behind bars for years without trial.

"Those accused of rape should be placed under bond and once they are found guilty, they should be sentenced to life imprisonment. That would be a good law and I will affix my signature to it," he indicated.

The United Nations has long campaigned against the culture of blaming the victim - saying a women's behaviour or choice of clothing can incite rape or sexual assault.

This attitude is prevalent Liberia, according to a UN study that found 83 percent of people thought a woman's appearance could contribute to her chance of being assaulted.

MP Kogar shares the view, saying the way a woman dresses can serve as "provocation".

"You cannot tell me because a lady wore a mini skirt it is enticing you to sexually abuse her," he says.

Despite the enduring culture of blaming the victim, activists say the government's move to implement the anti-rape roadmap is a strong step towards making Liberia a safe place for women and girls.

Has Liberia's Rape Law Reforms Been Upended By Politics?
Tagged:
Copyright © 2020 Radio France Internationale. All rights reserved. Distributed by AllAfrica Global Media (allAfrica.com). To contact the copyright holder directly for corrections — or for permission to republish or make other authorized use of this material, click here.