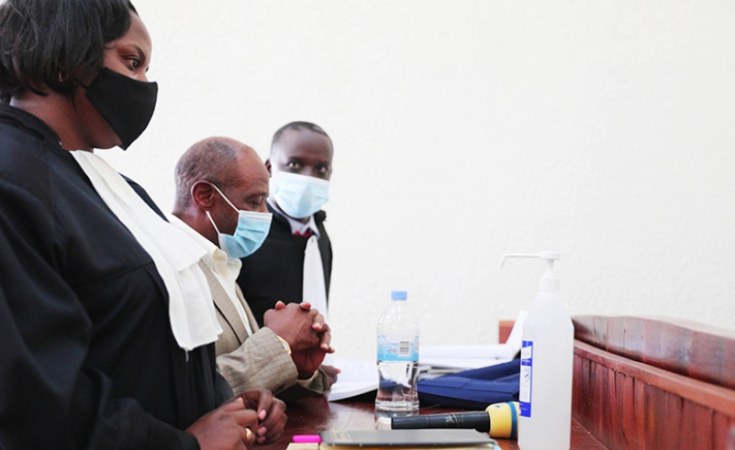 Paul Rusesabagina, the subject of the Hollywood film "Hotel Rwanda" in which he is portrayed saving Tutsis during the 1994 Rwandan genocide, has appeared in a Kigali court to face 12 charges, including terrorism.

The former hotel manager arrived handcuffed in the custody of the Rwanda Investigation Bureau, to face charges which include committing terrorist acts, murder, kidnapping and fire-starting. He did not enter a plea in court.

"He got Belgian citizenship in 1999 and therefore there is another key issue here where one might say that Rwanda is trying a foreign citizen on freedom of expression that he enjoyed while abroad," Rusesabagina's lawyer, David Rugaza told the court.

Rusesabagina, now 66-years-old, was portrayed as a hero in the Oscar-nominated movie "Hotel Rwanda" and is credited with saving nearly 1,000 Tutsis thanks to his connections with the Hutu elite. He has been accused of exaggerating his story.

He left Rwanda after the 1994 genocide, eventually obtaining Belgian citizenship. He lives in the United States. His family say he was in Dubai when he was abducted and brought to Rwanda to face trial.

According to an interview earlier this month, President Paul Kagame hinted that Rusesabagina had been tricked into boarding a private jet, although Rwandan police said he had been arrested in Dubai on an international warrant.

"Rwanda has an established track record of using unlawful, cloak-and-dagger methods to target those it perceives to be a threat to the ruling party," said Lewis Mudge, Central Africa director at Human Rights Watch.

"The fact that Rwanda did not pursue Rusesabagina through lawful extradition proceedings suggests the authorities do not believe their evidence or fair trial guarantees would stand up to scrutiny before an independent tribunal, and so opted to circumvent the rule of law."

Family worries about his health

Rusesabagina has been a prominent critic of Kagame since leaving Rwanda, including calling for armed resistance against the government, accusing the president of quashing opposition parties.

Kagame is credited with ending the 1994 genocide and had been a darling of western countries for his anti-corruption stance, but some governments have distanced themselves because of his allegedly repressive measures. In power since the end of the genocide, Kagame won the last elections three years ago with nearly 99 percent of the vote.

Rusesabagina has been allowed to speak to his family. His daughter Carine Kanimba told RFI that her father was a kind, caring and warm person. But she thought he was acting oddly when they spoke.

She said he did not want to discuss the trial. When she mentioned his medication to control high blood pressure, he dismissed her worries.

"'Mom told him that she had sent some medicine to him through the Belgian embassy, which he has not yet received, but in addition, he said 'no, don't send them, it's well, I'm taking some medicine from here and we're going to try them for the next month to see if it works'," she said.

"We found it very strange, because he knows he's been taking the same drugs for several years and all of a sudden he's given the other kind of drugs that we know can negatively affect him," she said, adding that her father is a cancer survivor as well.

Case of Rwanda Genocide Suspect Kabuga Moves to Arusha Court
Tagged:
Copyright © 2020 Radio France Internationale. All rights reserved. Distributed by AllAfrica Global Media (allAfrica.com). To contact the copyright holder directly for corrections — or for permission to republish or make other authorized use of this material, click here.