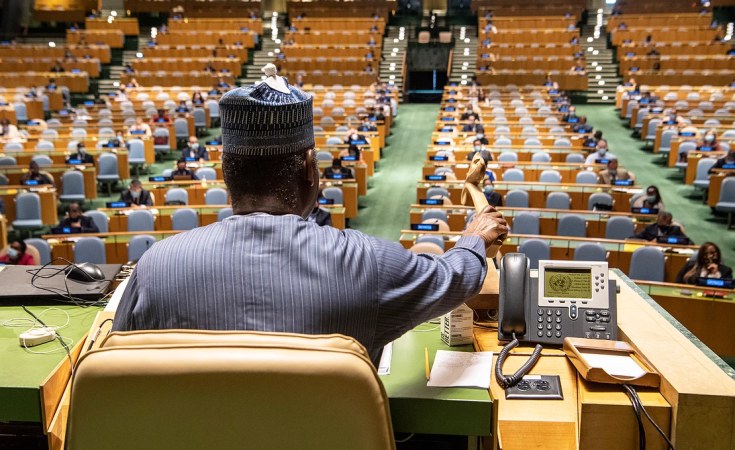 The President of the United Nations General Assembly (UNGA), Tijjani Muhammad-Bande has challenged Nigeria to continue to ensure that it asserts itself as a leader both at the regional level and the global stage.

Muhammad-Bande who is from Nigeria, who gave the charge during a virtual interaction with Nigerian journalists said that Nigeria had been providing leadership in Africa, but urged the country to ensure that it continues to play positive roles.

He stressed that Nigeria has been a very important member of the global community.

According to him, "Nigeria has provided leadership and it should continue to improve its own processes and continue to give leadership to Africa and also continue to play very positive roles in the global body.

"We have the technical and other resources to play increasingly important roles, and we are being looked up to by many, and I think we should continue to play our roles as leaders in the region and sub-region.

"Nigeria has a lot of things that people look up to it for, and we pray that we do the hard work required to continue to be leaders in the world community."

On efforts to defeat the insurgency, the UNGA president charged the nation not to relent, noting that Boko Haram had greatly affected Nigeria, Cameroon, Niger and Chad.

He said that although all organs of the UN were undergoing reforms, that of the Security Council was particularly not going to be easy.

"All organs of the United Nations are undergoing reforms including the secretariat in terms of how it serves countries around the world, in terms of representation.

"In the next few weeks and few months impactful meetings can happen and we expect more progress to be made to reform the Security Council.

"But make no mistake about it, it is not going to be an easy ride for anyone, it is a very complex issue trying to get power to others from those who currently hold it," he added.

The UNGA President, however, noted that most of the reform process has been slow due to difficulty to hold impactful meetings involving all countries at the same time.

He added that some progress has been made in terms of the common African position.