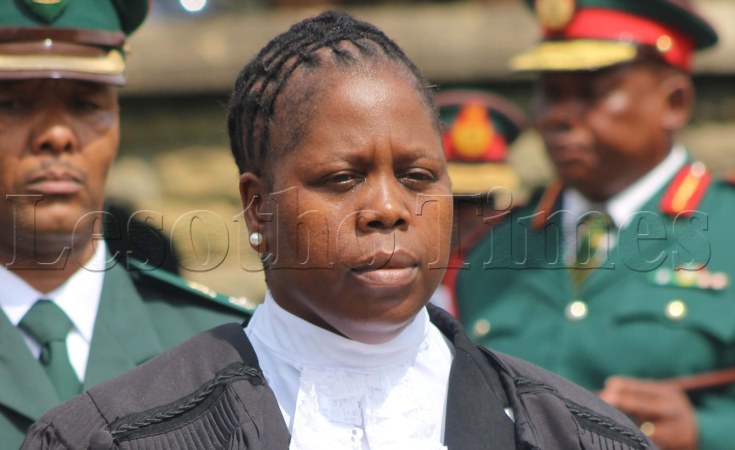 The fallout over the recruitment of new judges continued this week with the country's magistrates accusing the Judicial Service Commission (JSC) secretary, Advocate 'Mathato Sekoai, of using the issue to fight her own personal battles with them.

The magistrates also said Adv Sekoai was "just a messenger" who had no authority to act on behalf of the JSC and reject their plea for some of them to be appointed judges.

Adv Sekoai is the JSC secretary by virtue of being the registrar of the High Court and Court of Appeal.

The magistrates' attack on Adv Sekoai is in response to her saying the JSC would not consider the magistrates' plea to appoint them to the High Court bench.

This as punishment for copying their letter on the issue to media.

A fortnight ago, the magistrates, under the banner of the Judicial Officers Association of Lesotho (JOALE), wrote to the JSC requesting it to recommend some of their members for appointment as judges to King Letsie III.

This after they were overlooked in the proposed appointments of five new judges by Acting Chief Justice 'Maseforo Mahase and Attorney General Advocate Haae Phoofolo. The two met three weeks ago and recommended five candidates for appointment as judges.

None of the five recommended by Justice Mahase and Adv Phoofolo are magistrates.

The magistrates argue that some of their members who have wide experience adjudicating cases in the lower courts should have been considered instead. Some like Chief Magistrate 'Matankiso Nthunya have been magistrates for 25 years.

Magistrate Kao told the JSC some magistrates were ripe for appointment as judges. They were suitably qualified as they had garnered experience dispensing justice in the lower courts.

He copied his letter to the Law and Justice Minister Professor Nqosa Mahao. The letter was also copied to all media houses. That has not gone well with Adv Sekoai.

She later told the Sunday Express that the JSC would not even bother responding to the magistrates because they had copied their letter to the media in violation of JSC rules.

She cited section 6 of the JSC rules which reads, "No person shall publish or disclose ... the contents of any document, communication or information ... in respect to a matter relating to the commission (JSC)".

"I have received the (magistrates') letter but I am failing to understand why it was copied to the media," Adv Sekoai told the Sunday Express.

"I will not respond to the letter because responding to it would mean that I have to copy my response to the media as well. Copying the media in JSC business is against the rules," added Adv Sekoai.

She suggested that in writing to the JSC, the magistrates were seeking to exert undue influence on the judicial body to appoint them as judges. She said the JSC would resist such attempts to influence the way it conducted its business.

Magistrate Kao has hit back at Adv Sekoai, saying she is "just a messenger" who has no authority to act on behalf of the JSC and reject the magistrates' plea.

"JOALE never wrote to the registrar (Adv Sekoai) but to the JSC," Magistrate Kao said in an interview with the Lesotho Times this week.

"Adv Sekoai has no decision-making powers in the JSC. She is only a secretary. In fact, she is a messenger whose only duty is to pass on communication meant for JSC members.

"We don't understand how she gets to decide how to treat our letter when the recipients have not even seen it. The JSC members are the ones who will make the decision regarding our letter and not her.

"(Adv) Sekoai has always sought to usurp power which is not hers. She likes being in control and that was the reason for her suspension in 2012. She should know by now the repercussions of usurping powers which are not hers."

Adv Sekoai was suspended as High Court and Court of Appeal Registrar in 2012 and only resumed duties in January this year. She was suspended after High Court judges complained to the then Chief Justice Mahapela Lehohla over the manner she dispensed her duties.

In a scathing letter to Justice Lehohla, the judges said Adv Sekoai's conduct was "most discourteous at times, disrespectful and unhelpful, oftentimes downright arrogant".

Magistrate Kao this week alleged that Justice Lehohla only suspended Adv Sekoai after the magistrates rejected his proposal to remove her from her post and have her appointed southern region chief magistrate instead.

Magistrate Kao said since then, Adv Sekoai had been bitter and was now using the issue of the recruitment of judges to get back at the magistrates for rejecting Justice Lehohla's proposal that she be appointed magistrate.

"In 2011 the judges engaged in a three-day strike to force Justice Lehohla to fire Sekoai as they felt she was disrespectful to them.

"Justice Lehohla tried to find her another position which was at par with that of registrar. There was no principal secretary (PS) at the Law (Ministry) and he wanted to move her there but the government rejected the proposal saying a PS was a political appointee.

"Justice Lehohla then sought to have her appointed southern region chief magistrate. But we (magistrates) protested saying we could not have someone who had never been a magistrate or tried a case appointed to lead us. Left without any options, Justice Lehohla suspended her (until she was reinstated this year).

"We believe that her decision to reject our letter (over the recruitment of judges) is because she has never gotten over the issue of us rejecting her. She thinks she has finally got her revenge but she is illegally acting above her powers. She has no authority to reject our letter," Magistrate Kao said.