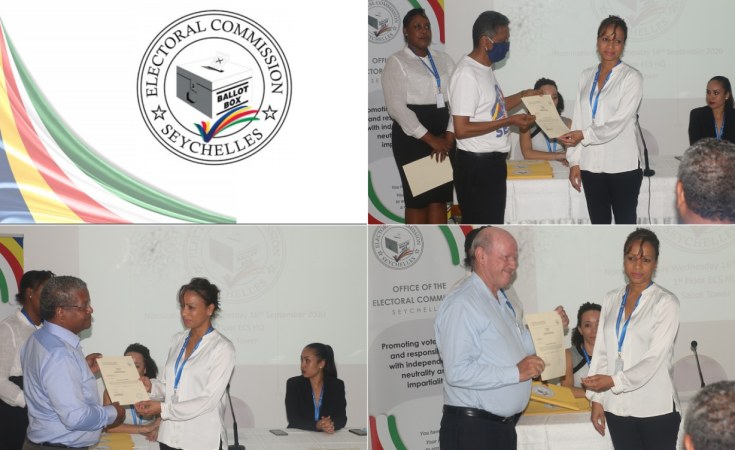 Voters in Seychelles will choose from among three presidential candidates in the October election: President Danny Faure of United Seychelles, Wavel Ramkalawan of Linyon Demokratik Seselwa (LDS) and Alain St Ange of One Seychelles.

The Electoral Commission of Seychelles on Wednesday accepted the nominations of the three while rejecting a fourth potential candidate, former Speaker of the National Assembly Patrick Pillay.

According to the Electoral Commission, the nomination of Pillay of the Lalyans Seselwa party was rejected because it did not have the required 500 supporters who are registered voters with copies of identification cards and signatures.

During a ceremony at the Commission, the draw for the order in which the names of the candidates will appear on the ballot paper was done. Ramkalawan will appear first followed by Faure and St Ange.

Each candidate had the opportunity to give their reactions to the press in the same order.

Ramkalawan said he wishes that this "election campaign takes place in civility and I think Seychelles has a chance to show African countries and other organisations that election goes well and that it is not a dirty event where people only insult each other."

He spoke about the presidential debate that will be organised by the Seychelles Broadcasting Corporation.

"During the debate, we will get the chance to listen to each other and the ideas that each will present. I ask Seychellois to listen well and make a decision for Seychelles and not only think of ourselves," said Ramkalawan.

Ramkalawan added that he is first on the ballot paper and hopes that this reflects the results of the election.

On his side, Faure said that "for all Seychellois citizens today marks the official launching of the political campaign and it is important that the campaign takes place in peace, tranquillity, stability and that all leaders and activists have respect for each other."

He said that respect should be on everything that people do especially on social media.

"I would like to ask my supporters that we have a clean campaign based on the programme I have put forward on coming together for Seychelles because I've realized that what the country is going through is one of the most difficult in its history. It important that we all come together to face the challenges ahead of us," said Faure.

St Ange said, "It is important for us today in the crossroads that Seychelles is going through to see where we are really going, where Seychelles wants to go and nobody can make that choice for us. Seychellois will make that choice in the ballot box on the 24th of October."

He said that the choice must be based on a programme that the political parties have brought to Seychellois people.

St Ange added that there is a fourth player in this election and that is COVID.

"COVID is important as it has shown Seychelles many things, the importance of tourism industry and more than that it has shown us how easy it is to break an economy... It is therefore important that in the choice that people make we look at the programme being presented," he said.

During the ceremony, a draw was also done for the order of the party political broadcast for the election scheduled for October 22-24 in Seychelles, an archipelago in the western Indian Ocean.

Next Story
Tagged:
Copyright © 2020 Seychelles News Agency. All rights reserved. Distributed by AllAfrica Global Media (allAfrica.com). To contact the copyright holder directly for corrections — or for permission to republish or make other authorized use of this material, click here.