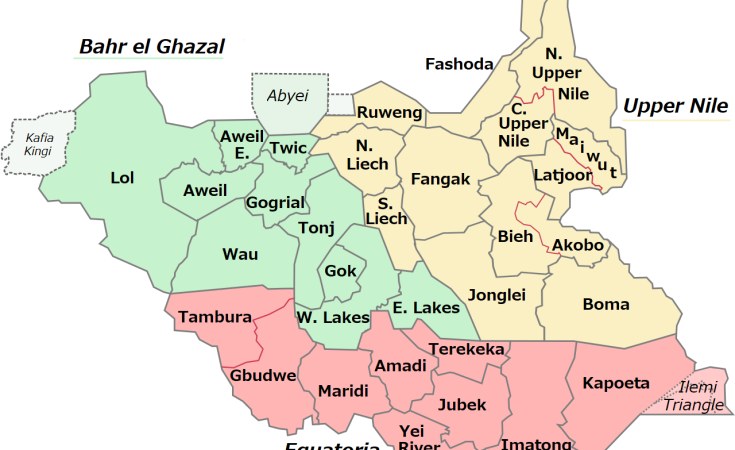 Syanarion62based on work by Jfblanc/Wikimedia Commons
The 32 states of South Sudan in 2017.
The Nation (Nairobi)
By David Mayen

In a presidential decree read on state-run TV SSBC, Mr Kiir sacked Salvatore Garang Mabiordit, who was reappointed to serve in the Revitalised Transitional Government of National Unity only last February.

Mr Mabiordit was replaced by his undersecretary, Mr Athian Ding Athian, who had served for years in that position.

In a separate order, President Kiir also sacked the acting commissioner-general of the National Revenue Authority, Mr Erjok Bullen Geu, who had been interim boss after Ghanaian, Dr Olympio Attipoe, who led the NRA, was sacked in 2019.

There were allegations Mr Bullen had made suspicious bank transfers out of the non-oil revenue collections, bank documents obtained by a local radio station in November in Juba showed. The President did not refer to this, but it is possible the allegations swirling around him made his presence untenable.

He was replaced by Mr Africano Monde, the former governor of the now-defunct Maridi State, who has been out of work ever since South Sudan collapsed the 32 states into 10 this year.

Mr Kiir also sacked Dr Chol Deng of the National Petroleum Corporation (Nilepet) and replaced him with Mr Bol Riing. Nilepet is a policy-making agency in oil and gas.

President Kiir did not give any explanation for sacking of the senior officials - apart from citing his constitutional powers to appoint and remove public servants.

However, earlier this week, a prominent civil society activist called on the President to suspend heads of revenue-generating institutions implicated in corruption.

The appeal came after last month's Economic Crisis Management Committee's recommendation to the President calling for the removal of the Director-General of Customs Service, Major General Ayii Akol, after his juniors accused him of corruption.

The committee said it discovered that $3.1 million was missing at the Directorate of Nationalities, Passport and Immigration.

Similarly, the committee accused traffic police headquarters of not accounting for funds collected through the issuance of number plates, licences, and logbooks.

The acting commissioner-general of the National Revenue Authority informed Parliament last week that the country had lost almost 40 billion South Sudanese pounds in the past three months alone.

Mr Bullen had attributed the leakage to tax exemptions.

Mr Daniel Kech Pouch, the Central Bank deputy governor, said the country ran had out of foreign exchange reserves after oil revenues plummeted, and it could not stop the local currency from sliding.

Mr Kech revealed that the South Sudanese pound was depreciating sharply and there was little that monetary advisers could do to arrest its fall.

As of Wednesday, $1 was equivalent to 500 South Sudanese pounds on the black market, while 1$ exchanges for 165 pounds in the Central Bank.