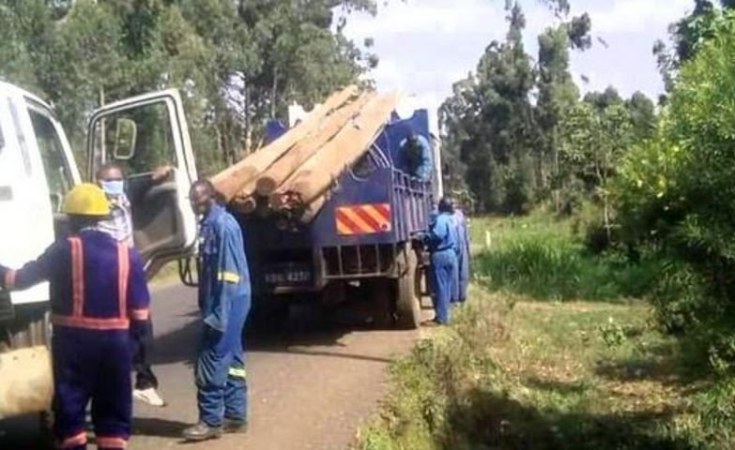 For Felix Ngui, a car yard owner in Nairobi, life couldn't possibly get any worse.

Anxious about the million-shilling loans he has to repay his bank, he had hoped that the slow reopening of the economy after shutdowns occasioned by Covid-19 would make it easier.

Now, this is a pipe dream. Nay, a nightmare. His car bazaar, Patflex motors, which is located at Nairobi Railways Club, was flattened by bulldozers on Tuesday night.

And he is not alone. Seven other car yards were demolished at 11pm in a nocturnal operation that has seen more than Sh200 million invested in the businesses go down the drain.

The property was brought down to pave way for the JKIA-Westlands Expressway.

Once the road project is complete, the area where their car yards once stood will host a bus terminus.

However, the Scheme presented a notice dated September 11, under gazette notice 2161 of 2020, showing that the land had compulsorily been acquired by the government.

The Kenya National Highways Authority (KenHa) was then ordered to enter and acquire the premises beginning Tuesday.

On the very day, as ordered by the gazette notice, the Kenya Railways visited the business owners and gave them eight hours to remove all their vehicles as well as shut down Lunar Park which is located in the same area.

The owners of Lunar Park vehemently protested the move. On Wednesday, NMS boss Major General Mohammed Badi announced an about-turn, assuring stakeholders that the popular park would be left untouched.

However, Badi said it will be re-modelled after the Greyhound Park in New York and be renamed Green Park.

The gesture was well received by the park's workers, who, just hours before, were bracing themselves to watch their livelihoods crumble under the weight of bulldozers.

"We are very grateful to Director General Badi. He has come here, heard our cries and replied very positively. He has even promised to make the volume go up once they set up the bus terminus and as the business community. We really appreciate," Gerald Kimari, the owner of Lunar Park said on Wednesday.

He sounds hopeful, but despite the good news, a fresh row has now erupted among the other traders after it was clarified that only Lunar Park will be left standing.

The car yard owners are livid. They had to remove more than 400 cars from the yards in the dead of the night as their offices, electric fences and cables were destroyed.

They had also renewed their leases with the Kenya Railway Retirement Benefit Scheme recently. The leases were to last the next nine years.

Pressed on whether the car yard owners will be compensated, DG Badi directed the aggrieved lot to court.

"This is Lunar Park, it is supposed to be a place for people to enjoy not a business to sell cars. That can be established anywhere. If you have your lease, you can get your lawyers to go to court and sue Kenya Railways. Those are the procedures of the government," he said.