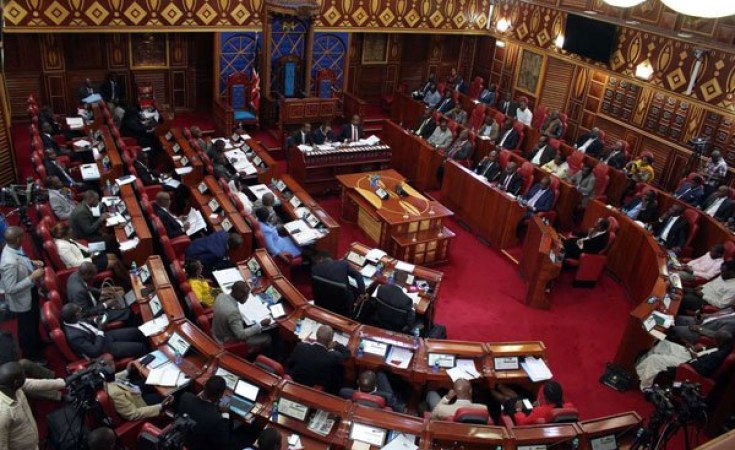 Dennis Onsongo/The Nation
Members of the Senate during a past session in Nairobi.
The Nation (Nairobi)
By Ibrahim Oruko

The Senate has finally adopted the third basis of sharing county revenue -- bringing to an end one of the most protracted and drama-filled legislative processes in the history of Kenya's Parliament.

In the formula passed on Thursday, each county will, in this financial year, receive the exact amount it received in 2019/20 financial year, in a decision that was in every inch a complete contrast to the kind of passions and emotions that have been witnessed in the past three months.

In the formula reached in a record six hours, the 12-member team charged with the task of developing consensus on the issue ensured that no county loses out.

This suggests a big win for Team Kenya, led by Tharaka Nithi Senator Kithure Kindiki and Nairobi's Johnson Sakaja, that pegged its debate on the idea that Kenya is one indivisible state and that no county should lose out on allocation it received in previous years.

The committee came up with a revenue allocation ratio, pegged at Sh316.5 billion, and an eight-weight parameter for sharing the Sh370 billion the counties will receive in the next financial year.

The formula will use data from the 2019 population census and the 2015/16 Kenya Integrated Household Budget Survey poverty index.

The Sh316.5 billion is the amount the devolved units have received in both the 2019/20 and 2020/21 financial years and the ratio will guide sharing of counties' equitable shareable revenue for the next five financial years.

The House adopted a requirement that binds the national government to ensure that during the operations of the formula, no county receives an amount in equitable share that is less than what it received in the 2019/20 fiscal year.

In the new formula, only made possible by President Kenyatta's decision to pledge an additional Sh53.5 billion to counties starting next financial year, Sh158 billion of the Sh370 billion has been ring-fenced to ensure that each county will receive at least half of the figure it received in the 2019/20 and 2020/21 financial years.

The balance of Sh212 billion will then be subjected to the eight parameters in a delicate balancing act that senators said is meant to ensure that no county loses out on the allocation each one of them received this financial year.

With the new formula, Nairobi is the biggest gainer with an additional Sh3.3 billion, and its allocation will shoot from Sh15.9 billion to Sh19.2.

Moving the motion on the report, Bungoma Senator Moses Wetangu'la, who co-chaired the committee, said the impasse in the House over the formula was not in vain and that it had paid off through increased allocations.

"It has occasioned an additional Sh53.5 billion to counties," he said, while hailing his colleagues for defending devolution.

Late Thursday, the House also passed the County Allocation of Revenue Bill, 2020, which when signed by Mr Kenyatta, will unlock money to cash-strapped counties.