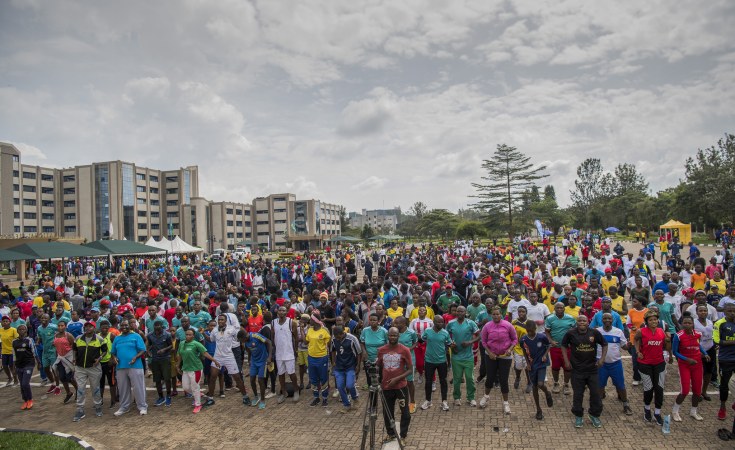 After a six-month wait, people of all ages ushered into streets across Kigali as the Car Free Day finally returned on Sunday, September 20 following the Ministry of Sports' announcement a week before.

The bi-monthly physical mass sports exercise was among Sports activities which were suspended in march to contain the spread of the Covid-19 pandemic after the first case was reported in Rwanda in March.

Sports Minister Aurore Mimosa Munyangaju and City Mayor Pudence Rubingisa were among the participants of Sunday's Car Free Day, as a section of people excitedly departed from Amahoro National Stadium heading to Rwanda Revenue Authority's headquarters, passing through Gishushu, Kigali Business Centre (KBC) and the Office of the Ombudsman.

There was a remarkably big turn up at the mass sport as people were seen either walking, running, stretching or cycling across the streets. A one-meter-distance between a person and another was also respected.

However, mass gatherings, which used to bring people together at each of the designated sites in Kigali, and voluntary medical testing sessions were both prohibited to avoid violating guidelines set to avoid the spread of the pandemic.

Minister Munyangaju said that resuming Car Free Day was an important decision taken to give people from across Kigali, and beyond, a room to keep fit but making sure that they comply with preventive measures against Covid-19.

"Although the pandemic still exists, people need to work out which many Rwandans believe plays a big part of a healthy life because it contributes a lot in the prevention of some diseases caused by not exercising," Munyangaju said.

"People are trying to respect guidelines in streets and we have young volunteers across streets who are making sure they are following the measures. But now everybody is concerned and it is the right time to tell people that even if you are exercising you need to take measures seriously," she added.

Some sports like Golf, Tennis, Badminton, Athletics, Cycling and Motor sports were among disciplines that resumed since June 8th, though no tournaments were allowed to happen yet.

As part of the move, people regularly gather at Amahoro National Stadium for different physical exercises.

Over 500 sports people gather at the stadium every Sunday and Munyangaju explained the numbers were quite worrying hence the need to resume Car Free Day to create more space for them so they can do sports in a comfortable way and avoid any chances of getting infected with Covid-19.

The mass sport exercise looked like something new to some participants who told The New Times that they have been waiting for it for a long time.

"Six months has been too long and I really missed Car Free Day. Yes, I would do sports but I was uncomfortable to walk on overcrowded streets, with cars also crossing around. It's a relief not only to me but also to so many people among us who are looking to be back to fitness. Bringing the Car Free Day was a good decision which I am sure will benefit our health," said Danny Mugenzi, one of Sunday's Car Free Day participants.