Nigeria: After Ize-Iyamu's Defeat, What Next for Oshiomhole 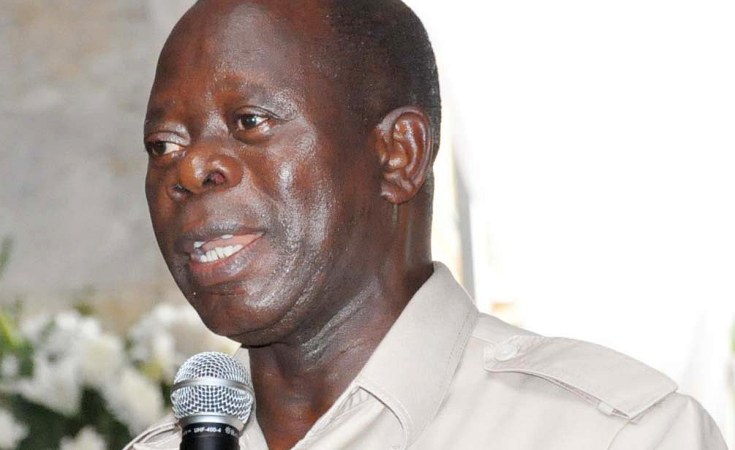 The forces within the APC that forced Mr Oshiomhole out of office are still in the party and his loss in Edo has, arguably, diminished his electoral value.

If anything is worth celebrating for the former chairman of the All Progressives Congress (APC), Adams Oshiomhole, it is definitely not the outcome of the Edo governorship election.

Though Mr Oshiomhole won his local government for the APC, the final result of the election held across the 18 local governments in the state still left many of his supporters disappointed.

"Godwin Obaseki of the PDP, having satisfied the requirement of the law and scored the highest number of votes, is hereby declared the winner," Johnson Alalibo, the chief returning officer of Nigeria's electoral umpire, INEC, in the state, announced on Sunday.

Peoples Democratic Party (PDP) governorship candidate, Governor Godwin Obaseki, of Edo state. [PHOTO CREDIT: Official Twitter handle of Obaseki || @GovernorObaseki]While many have continued to describe the election as a battle between a godfather and his estranged protege, others have started raising concerns on what will become the fate of Mr Oshiomhole, who had been credited with ending godfatherism in Edo State.

Will the former APC chairman be given a federal appointment by President Muhammadu Buhari as a consolation for the humiliating defeat or will he maintain a low profile like his predecessor in office, John Odigie-Oyegun? This remains one of the uncertainties after the September 19 election.

After concluding his tenure as president of the Nigeria Labour Congress (NLC), Mr Oshiomhole detoured into politics where his rise is best described as meteoric.

As the 2007 candidate of the Action Congress of Nigeria (ACN), he lost to the PDP candidate, Oserheimen Osunbor, a former senator and professor of Law.

The former NLC president challenged the result in court and in November 2008, the Court of Appeal upturned Mr Osunbor's victory and declared his challenger (Oshiomhole) the winner.

While in office, Mr Oshiomhole preached against godfatherism. He boasted of retiring some Edo godfathers and political figures, including former ministers Anthony Anenih and Tom Ikimi from politics.

Tony Anenih. [PHOTO CREDIT: Pulse]In terms of performance, Mr Oshiomhole has been widely adjudged to have outperformed his predecessors. He is credited with improving the infrastructure in Benin, the Edo capital.

After his two terms of eight years as governor, Mr Oshiomhole successfully installed Godwin Obaseki as his successor in 2016, a decision which he, during his campaign for his now defeated anointed candidate, Osagie Ize-Iyamu, said he regretted.

In 2018, Mr Oshiomhole became the National Chairman of the APC after his predecessor and another former Edo governor, John Odigie-Oyegun, was butted out of office. But shortly after, he began to have problems, one of which was his disagreement with Mr Obaseki whom he sold passionately to Edo electorates in 2016.

Oshiomhole, his many battles as APC chair

Though one could describe what started as a cold war between the immediate past Edo governor and his successor as the genesis of the former's woes but there were other contributing factors.

There had been complaints against Mr Oshiomhole's style of leadership by different factions of the ruling party, which later degenerated into calls and protests, demanding his resignation or outright removal.

The controversies eventually led to disqualification of Mr Obaseki from the APC governorship primary - after which he joined the PDP - and the dissolution of the APC National Working Committee headed by Mr Oshiomhole.

Mr Oshiomhole's removal as APC chairman appeared to have made him more determined to ensure Mr Obaseki was defeated in Edo.

He led the APC's campaign in Edo with many accusing him of even overshadowing the party's candidate, Osagie Ize-Iyamu. Unfortunately for the former labour leader, Mr Obaseki won the election convincingly.

Having unexpectedly failed to get his new 'ally', Mr Ize-Iyamu, to win the election, the possibility of Mr Oshiomhole boosting his dented image in the league of APC's national leaders has further been damaged.

Since he has exhausted the two-term constitutionally permitted as a governor of the state, there are few options left for the former chairman to explore, if he does not get a federal appointment by President Buhari.

Meanwhile, till the end of the electioneering process, Mr Odigie-Oyegun continued to reiterate his displeasure at Mr Oshiomhole's management of the Edo APC saga and the exit of Mr Obaseki from the party.

"My views and statements on the Edo political situation have been consistent. I strongly advised against the mistreatment of Godwin Nogheghase Obaseki by the late unlamented National Working Committee, NWC, of the APC and his subsequent forced exit from the APC.

"Governor Obaseki stood bravely for the dignity and the pride of his people and in the process, suffered unacceptable indignities," PREMIUM TIMES had reported him, saying, barely a week to the poll.

Such statement signalled the position of Mr Odigie-Oyegun despite his inclusion on the APC governorship campaign train.

Another option for Mr Oshiomhole is to join the rank of former governors who aspire to become senators. The ex-labour leader is still very influential in his Edo North senatorial district as reflected in the governorship election result. However, he would have to wait till 2023 for such opportunity unless the incumbent senator drops out.

The other option for Mr Oshiomhole is to re-contest for the position of APC national chairman later this year or when the election is held. However, although he is eligible to do so, Mr Oshiomhole's chances of winning in such election is very slim. The forces within the APC that forced him out of the office are still in the party and his loss in Edo has, arguably, diminished his electoral value.