Kenya: How Security Sector Has Grown in War on Terror 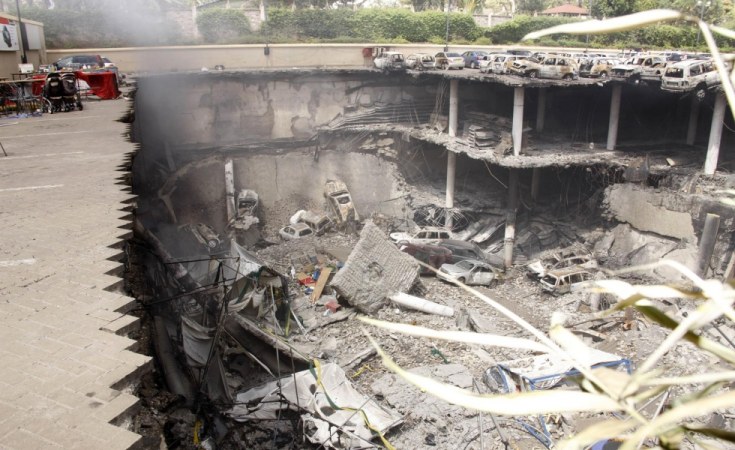 Kenya Military
Part of the Westgate Mall building that was destroyed by armed militia in Nairobi 7 years ago.
The Nation (Nairobi)
By Mary Wambui

A team of four gunmen stormed the high end mall and begun shooting at shoppers, targeting non-Muslims in one of the country's worst attacks in history.

But seven years down the line, the country has made major improvements in how it responds to terror threats and attacks.

As seen in last year's attack at Dusit Hotel, where security officials were praised for deploying a well-coordinated response operation that left fewer casualties and neutralised the threat faster, the country's counter terrorism approaches are changing to combat the evolving terror threat -- an example being Al-Shabaab's deployment of local non-Somali terrorists to conduct the first suicide-bombing in the country during the Dusit attack and use of social media to facilitate its operations.

After the Westgate attack, intelligence gathering approaches and surveillance systems were enhanced, the National Counter Terrorism Centre (NCTC) was established and the government pushed for community policing as a means to gather intelligence at the village level.

Security agencies have increased surveillance especially in buildings likely to be targeted within the city and at the same time assisted buildings owners to revamp their security systems and alertness.

Heightened surveillance saw several young men of Somali origin arrested by ATPU officers on suspicion of planning an attack at Hilton Hotel in June last year after they were captured on CCTV cameras taking images of the hotel.

In August 1, 2019 three other young men were arrested for allegedly taking pictures of Hotel Vila Rosa Kempinski for five days.

Early this year, the US warned of a possible terror attack targeting a high-end hotel in the city, which was believed to be popular with tourists and business travellers; but luckily no attack happened.

Although some government's recommendations to boost public safety have been ignored, in particular the screening of passengers at bus stops as they board matatus, other changes like the placement of metal detectors at the entrance to institutions and supermarkets, police officers manning church compounds and so forth have been adhered to.

As the country marks another sombre anniversary of the Westgate attack today, experts warn that the threat of terror is still rife, and terrorists are now recruiting more members online.

In his speech at the organisation's 22nd AGM, Interior CS Dr Fred Matiang'i called on police bosses to continue challenging themselves to adopt best practices and encourage clearly understood, uniform language in order to fight terrorism and trans-border crime.

"In the fast-evolving security landscape, creating a critical infrastructure with candid conversations and agreement on policies and procedures among agencies has become a necessity rather than an option," he said.

Last month, the United States Africa Command warned that Violent Extremist Organisations like Al Shabaab are still actively looking for opportunities that will emerge with this pandemic to accomplish their targets.